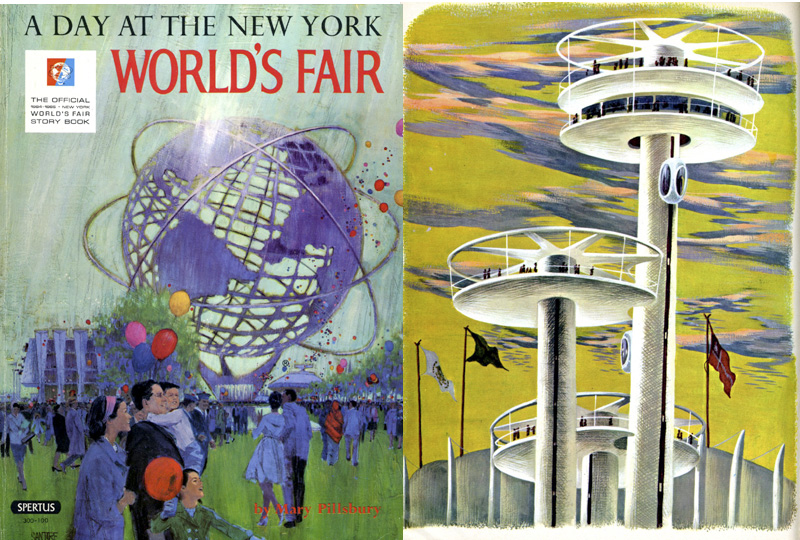 Posted by Elizabeth Broman on February 3, 2020

The Cooper-Hewitt Library has a large collection of over 2,000 World’s fair catalogues and books. Some are children’s souvenirs and stories. A day at the New York World’s Fair with Peter and Wendy brings back memories of certain things I remember from visiting the world’s fair.. As a teenager, my mother had loved the 1939 World’s fair, so that when it came to New York City again in 1964-65, she wanted to see another World’s fair and have us children experience the same excitement and wonder. It was a long subway ride from Brooklyn through Manhattan to Flushing Meadows in Queens, the site of the ’39 fair.  I bought a special “World’s fair “outfit” to wear every time I went; an orange blouse and a blue skirt- the official World’s fair colors.

We talked about the Fair in school, sang the UNICEF theme song in Assembly – “It’s a small world after all”, and learned about the different countries that had pavilions at the fair. I most vividly remember waiting until dark to see the fountains and colored lights and music. This was better than the 4th of July! The Fountain of the Planets, sent tons of water into the air in shifting patterns, sometimes as high as 150 feet, and the water was synchronized with the fireworks, lights and music.

I remember very well the very exotic looking Hawaiian and Polynesian Pavilions, with thatched little booths. I never ate in the restaurant Like Peter and Wendy did; but we did study Hawaii and had a luau, when we each had to bring some Hawaiian food to school. Try explaining that to your grandmother. Sweet potatoes  pretended to be poi (taro root), a native cuisine.  My memories of the Fair are mostly visual, glimpses of this or that pavilion, but what was most iconic, visible and still survives is the Unisphere. This was the only World’s Fair that I’ve ever been to,  they have changed in purpose and scope with the advent of global communications and media.

I was just home from two & half years in Northern Italy in the US Army, took my future wife and had a grand time my fondest memory was the Statue The Pieta by Michelangelo