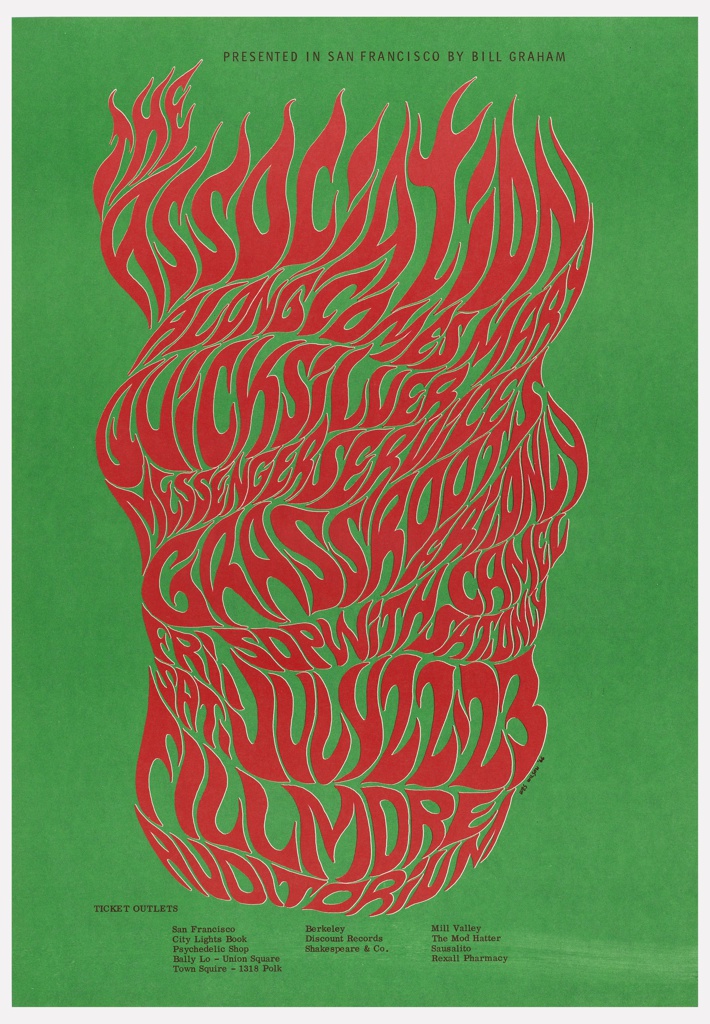 Designer Wes Wilson, who died on January 24, 2020, at age 82, created some of the most memorable posters of the psychedelic era. These wavy-gravy, acid-colored, hand-lettered provocations for the eye accompanied rock shows at San Francisco’s Fillmore Auditorium and Avalon Ballroom. Wilson’s posters for the Grateful Dead, Jefferson Airplane, The Association, and other bands were affordable works of art that could be purchased at the shows or in neighborhood smoke shops. They became essential memorabilia of the period’s vibrant counter culture. Wilson, along with Bonnie MacLean, Victor Moscoso, Peter Max, and other artists, revived the organicism of Jugendstil and art nouveau. They used swirling lines and repeating forms to keep the viewer’s eye in motion. Their hand-lettered text flouted traditional typographic values of legibility and uniformity.

Wilson established his unique style with this 1966 poster for The Association, which plays with the viewer’s powers of perception. Colors that have different hues (such as red and green) yet are close in value (having a similar level of lightness or darkness) are said to “vibrate.” A shimmering effect occurs where the edges of the flaming red letters meet the brilliant green background, making it difficult to separate the figure from the ground—or understand the text at all. Wilson rejected modernist ideals of flush-left type, open “white space,” and rational grids. He created posters that were designed not to be read but to be experienced.

← Cara McCarty, Curator: An Astonishing Career
1964: I was there…in my Orange and Blue →

I never see Mike Lancaster‘s name mentioned. He along with several others helped do posters for West Wilson, Stanley mouse etc. He did a lot of the acid test posters. I simply wonder why nobody speaks of him? My understanding is that he was working for midnight graphics who contracted with these artists giving these artists the graphics that took too long to do.