The Golden Age, or Two Putti and a Goat 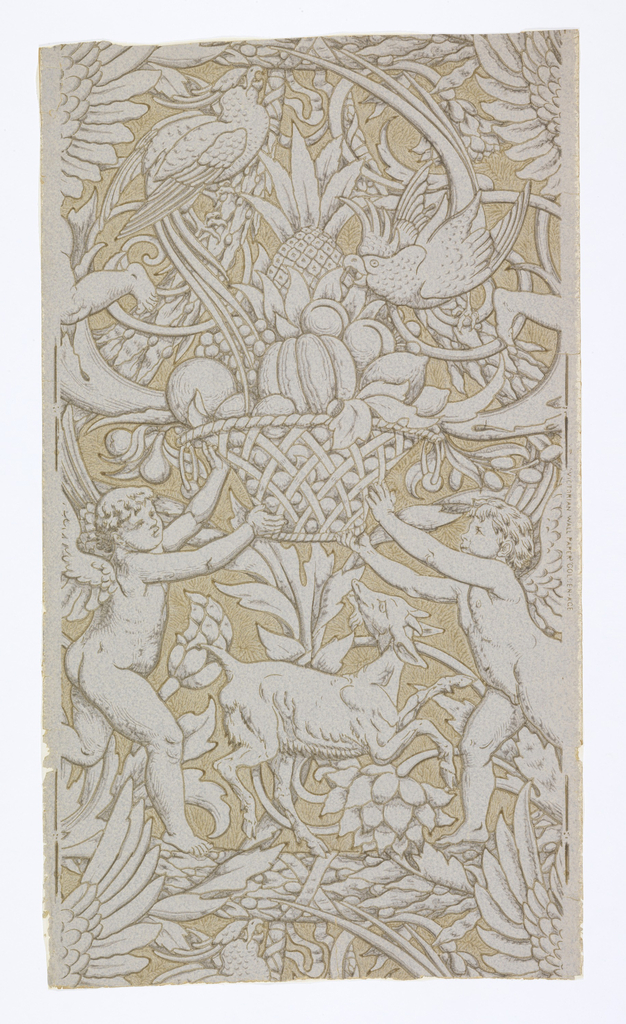 Posted by Gregory Herringshaw on February 4, 2020

The Golden Age is a delightful wallpaper designed by Walter Crane in 1887 and printed by Jeffrey & Co. in London as part of their Victorian Wall-Paper collection. The design contains two winged putti, standing on a large foliate swag, supporting or carrying a large basket of fruit. There are two large birds, maybe cockatoos, above the basket, one perched on another foliate swag, apparently going after a berry, while the other happily engages with fruit in the basket. A frisky goat appears between the two lads, noshing on some foliage. The design is printed in two colors on a light blue or gray mottled ground. The background tan color, with its wavy lines going off in all directions, clearly shows the imprint of the woodblock. This design was also produced in embossed leather and in an embossed pasteboard imitating leather.

The Golden Age was one of at least two wallpapers by Crane exhibited at the Royal Jubilee Exhibition in Manchester in 1887, and is illustrated in the catalog by Jeffrey & Co. This exhibition celebrated the golden jubilee of Queen Victoria’s accession.

I am bewildered by the catalog information for this paper which states this was printed in the United States in 1935. There is no documentation available to support this information, which suggests this paper is a reproduction. It is clearly a woodblock print and has “Victorian Wall Paper Golden Age” printed in the selvedge, and appears to be printed from the original blocks. This was donated by D. Lorraine Yerkes, designer and owner of a wallpaper studio in Chicago, Illinois. Perhaps Lorraine came across this at a fair and had the foresight to acquire it for her archive.