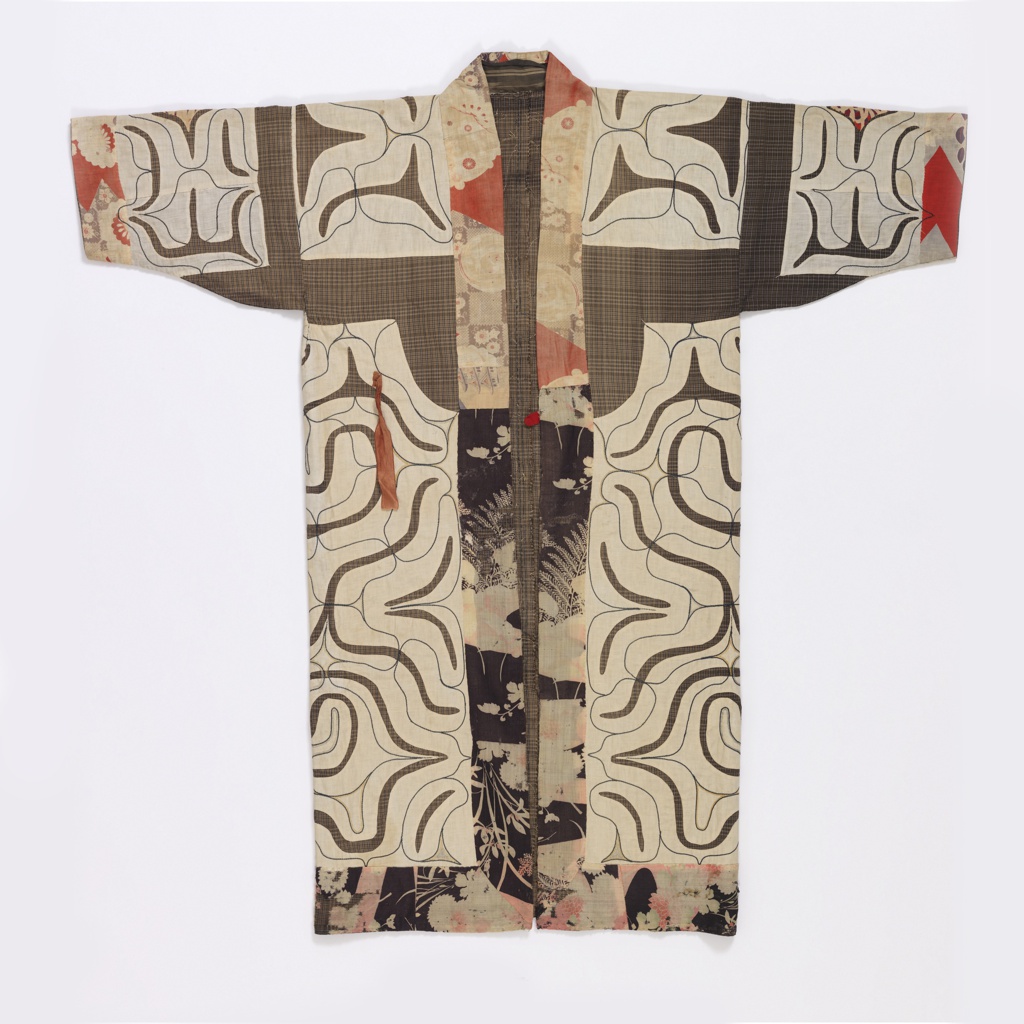 Posted by Kimberly Randall on September 20, 2019

This cotton robe is an example of a kaparamip, made and worn by the Ainu people of Hokkaido, the northernmost prefecture in Japan. Traditionally, the Ainu used elm-bark (attush) and nettle fiber to weave garments and accessories. By the late nineteenth century, however, trade between the Ainu and the mainland Japanese proliferated, increasing the availability of cotton on the Ainu lands.

The kaparamip, meaning “thin clothes,” refers to the lightweight robes made of trade cotton. It is believed to have originated in the Hidaka region of southern Hokkaido where the climate was warmer than other areas. The kaparamip is characterized by large portions of white cotton appliqué laid over a darker-colored base fabric. The Ainu adopted a reverse appliqué technique (kiribuse or kirinuki) to reveal the multiple layers of textiles. Compared to the bast fibers used in earlier robes, cotton allowed greater aesthetic versatility, resulting in dynamic appliqué and embroidery covering most of the garments’ surface. [1]

Executed in a patchwork style, this robe juxtaposes traditional Ainu elements and influences from the mainland Japanese kimonos. The series of meandering lines are embroidered using a couching (ikarari) stitch, forming thorn-like motifs (aiushi) that were meant to protect the wearer from harm. [2] While the embroidery is specific to the Ainu, the colorful patterned fragments along the openings, hemline, and on the back serve as evidence of the flourishing trade practices with mainland Japan. The inclusion of various botanical prints, such as maple leaves, ferns, and peonies on a single garment suggests that the Japanese textiles were utilized to add embellishment, rather than to express seasonal or symbolic meaning. Furthermore, the violet fragments on the back may be attributed to the Taisho or the early Showa period; their stylized floral print with swirling vines (karakusa) possibly references the Art Nouveau and Art Deco styles that influenced Japanese textile design during the first few decades of the twentieth century. The hodgepodge of colors and patterns incorporated in an exquisitely asymmetrical manner embodies the Ainu’s craftsmanship, as well as their response to new fabrics.

Ayaka Sano is a Master’s degree candidate in Costume Studies at New York University. She serves as the Social Media Coordinator at the Textile Society of America.