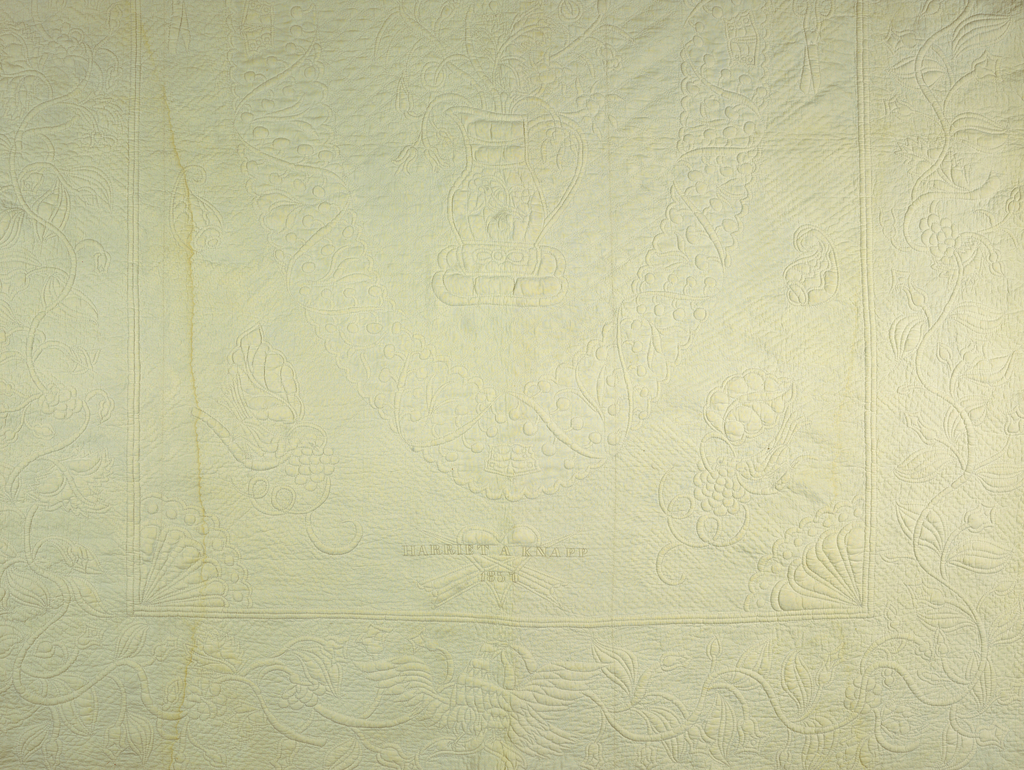 Posted by Kimberly Randall on September 19, 2019

American women made embellished white bedcovers—wholecloth quilts, as well as embroidered and woven counterpanes—in great numbers in the first two decades of the nineteenth century. Though the popularity of patchwork quilts eclipsed their creation by the 1830s, white bedcovers continued to experience periods of resurgence. By the 1850s, some young women were making special white wholecloth quilts as part of their trousseaus.

This quilt, inscribed “Harriet A Knapp, 1857,” presents a well-balanced design incorporating birds, botanical elements, and household objects. The central motif is an array of stems bearing fruits and flowers emerging from a graceful pitcher, which itself is decorated with the image of a bird amid similar flowers. The majority of nineteenth-century white bedcovers feature a central image of a bouquet in a container, but the pitcher is a departure from the more usual variations of vases, urns, baskets, and cornucopias. Strategic placement of additional images and the curvilinear border complement the central design. Harriet raised the visibility of her imagery by stuffing the pictorial elements with additional cotton before quilting the layers together.

Harriet’s quilt is evidence that her education included fine needlework. She would have stitched a “schoolgirl sampler” as a student in a female academy, but she made the quilt afterward. Although the small, regular stitches are certainly Harriet’s handwork, it is probable that her former instructor marked the design on the cloth. The graceful curves and skillfully detailed figures indicate the work of a well-practiced hand.

The elegant design and skillful stitching belie Harriet’s modest rural upbringing. She was born in Charleston Township, Michigan in 1838, the third of the seven children—and the eldest daughter—of Edmund and Melissa Harris. Her parents had married in New York and arrived in Michigan by 1833. An 1850 agricultural census reveals that the total value of the Lane family’s farm, equipment, and livestock was significantly lower than that of their neighbors.

Although Harriet, at age nineteen, inscribed her quilt with her married name, her marriage to Isaac Smith Knapp was not recorded until September 28, 1858. In the 1860 census, Isaac was identified as “farmer”, but the Knapps owned no land. From 1864 through 1866, Isaac served in a Union infantry regiment, while Harriet stayed with their two young daughters. Their son was born in 1867.

Harriet Knapp lived her entire life in Kalamazoo County, Michigan. Her elder daughter Helen Knapp Carson likely would have inherited her mother’s quilt. In 1930, at the age of 71, Helen Carson was living with her daughter Harriet Josephine Carson, age 40, who was employed doing “clerical work” for a manufacturer. The following year, Harriet Carson married Walter Carpenter, and Helen Carson continued to live with the couple until her death in 1943. Harriet Carpenter had no children. Sometime before 1975, the quilt came into the hands of Edla Cusick, a Manhattan artist and philanthropist, who donated it to the Cooper-Hewitt.

Laurel Horton is an author, editor, lecturer, consultant, and researcher with a specialized focus on quilts.

← From Tree to Cloth
Colorful Cotton →

One thought on “A Quilted Bouquet”

Hi Laurel,
The photo appears to cut off the top of the quilt. Is there an image showing the whole thing? It’s gorgeous!