Fragment of the Cahuachi Great Cloth 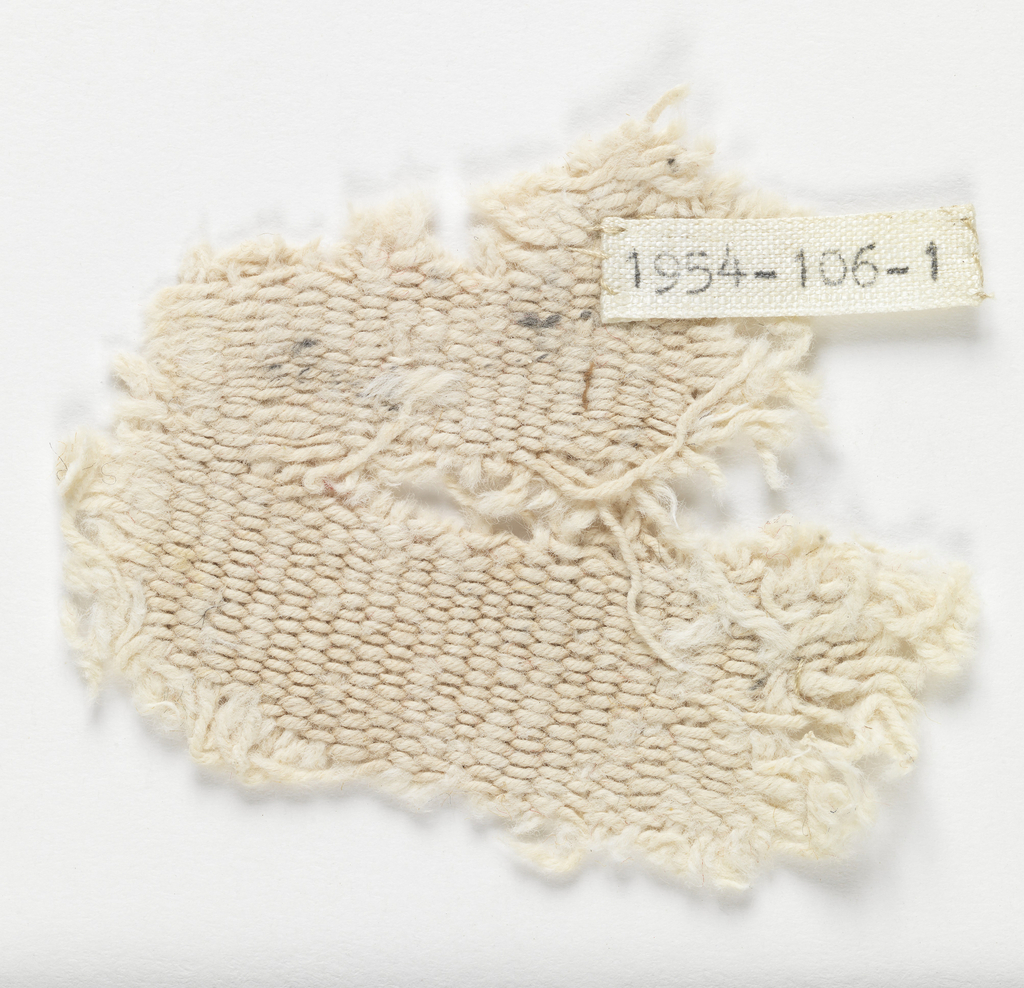 Posted by Kimberly Randall on September 6, 2019

A scrap of plain white cloth says a lot about a culture. And when that scrap comes from an extraordinarily large piece of cloth, it says even more.

This small cotton textile came to the Cooper Hewitt from William Duncan Strong, an archaeologist from Columbia University, who had just excavated the site of Cahuachi, in the Nasca Valley, Peru in the 1950s. Cahuachi, the largest ceremonial site in the south of Peru is situated in the vicinity of the famous Nasca lines in the surrounding desert. While excavating the site, Strong came across a curious thing: a large trench that was filled with one gigantic textile, folded, layer upon layer, accordion-style. Hoping to discover spectacular burials richly embellished with colorful cloths, polychrome ceramics and gold and shell jewelry known from the region, Strong was disappointed. In his journal entry of September 1, 1952, he noted:

“ ‘The Carpet Site’: To dig. Opened up the cloth ‘tomb’ at Cahuachi- proved to be a layer of cloth—several centimeters thick, 30? Meters long – 140 cm broad and 120 (mas o menos) deep. The damnedest thing I have yet seen… Dug below it a meter or so and hit solid caliche (maritime clay) no tomb—no necropolis. Damn.” W. D. Strong Journal 1952-1953 vol. 1 p. 65, W. D. Strong archive, Anthropology Department, Columbia University

Strong was extremely disappointed at the findings of the cut, subsequently referred to as the “‘Rag Carpet’ site.” What he had hoped to find, were richly endowed burials, on the scale of the Paracas Necropolis. In fact, what he had actually found was probably the largest single piece of cloth ever woven in the Western Hemisphere, buried in a trench, near the base of the largest ceremonial architectural mound in the South Coast of Peru.

The remains of the cloth—or some of them—were packed in cardboard boxes and sent back to Columbia University, Strong’s home site. It is from these boxes, that the small fragment now in the collection of the Cooper Hewitt originated. Additionally, boxes of ceramic sherds excavated at the site were also sent to the university, and Strong’s analysis of them became the basis for the seriation of the Nasca culture sequence— that flourished between around 100 B.C.- 700 A.D.– used to this day by archaeologists and art historians.

As a PhD student at Columbia in the mid 1980s, the focus of my dissertation was the documentation of the Strong textile materials from Cahuachi. The remains of the great cloth had been stuffed into four or five boxes—as Strong and his team had literally dug through the center of the cloth to test the pit, only some parts were intact. One of the pieces has a complete loom width preserved, with a selvage to selvage dimension of 220 inches—or over 18 feet. Sewn to this is a second fragmentary piece of cloth, which also has part of one selvage.

The extent of the preserved textile remains, when calculating piece by piece, together represents approximately 20½ feet of length and 18 ½ feet of width of cloth. We cannot know the actual original size of the complete cloth, though Strong, at the time of the excavation, estimated the length of the cloth to be at least 50-60 meters or between 164-200 feet long.

It is difficult to speculate how long it might have taken to make, and how many individuals were involved such a tremendous undertaking. Consideration for the large quantity of cotton that would have been spun especially to create the 3ply warp yarns and the 5 ply wefts, with 60 warps and 14 wefts per inch of weaving. If the original cloth was the dimension speculated by Strong, this would require nearly 1,700 miles of yarn. And how to account for the tremendous width? On what kind of loom would this cloth have been woven, and how many weavers would be working together? Something to think about.

Archaeologist Helaine Silverman (who excavated Cahuachi in the 1980s) postulated that Cahuachi was the destination of ceremonial pilgrimage that took place at certain times of year, and involved traversing the vast Nasca desert. She considered that the pilgrims, coming from near and far, may have used some of the now-famous lines as walking rituals, especially those that lead directly up to the center of Cahuachi.

Perhaps the large cloth had also been used in such a ritual, forming a surface of enactment or for pilgrims to walk upon during an important ceremonial occasion, after which it was given its own symbolic burial at the foot of the largest pyramid in the south coast of Peru.

Plain white cloth has its own value.

Elena Phipps is the author of “The Great Cloth Burial at Cahuachi, Nasca Valley, Peru” (1996).