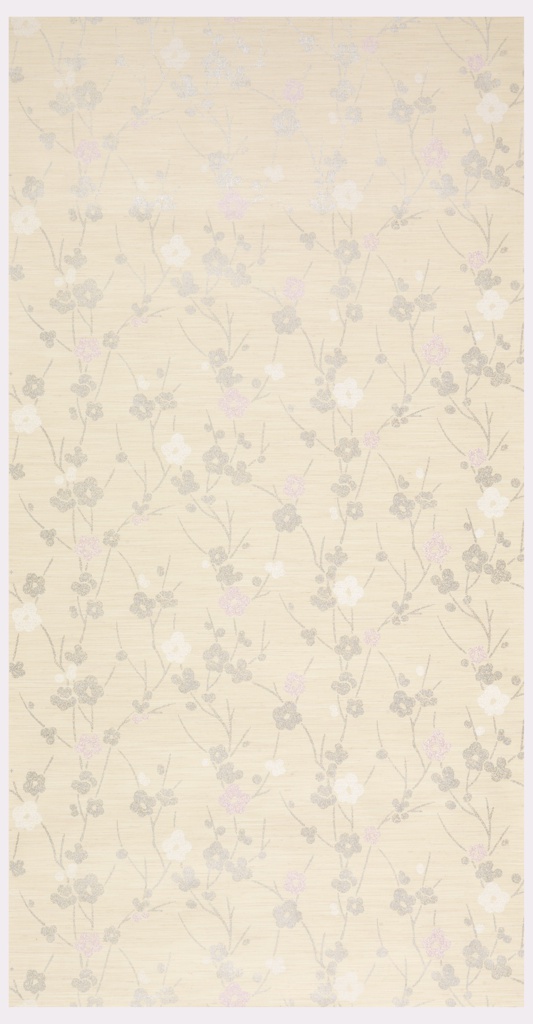 Lithe and resplendent, a maze of branches weaves its way across the composition of this lightly colored fusuma paper. In Japan, fusuma are sliding panels that can serve as walls or doors inside the home. Scattered along each bough are a multitude of delicately rendered flowers whose petals invite the eye to linger on their asymmetrical forms. Between the serene hues of white and pink is a luminous gray that further entices the gaze, coaxing us to reexamine the piece anew.

In the midst of spring in New York it is nearly impossible to ignore the excitement around the first flowering of the year, especially in regard to cherry blossoms. From Central Park to Brooklyn and beyond, the entire city is bursting with enthusiasm for these popular buds. In art, the cherry blossom has long been depicted and the genre of wallcoverings is no exception.

Emerging from the cultural exchange between China and Japan in the ninth and tenth centuries, the planting of cherry trees and the appreciation for their blossoms have become synonymous with Japanese aesthetics. Stemming from ideas cultivated in Buddhism, cherry blossoms are traditionally associated with the ephemeral qualities of life, and call on the viewer to appreciate each moment. The tradition of Hanami ,or blossom viewing, didn’t emerge as a festive practice, similar to what we experience today, until the Edo period (1603- 1868). As a subject for wallpaper, cherry blossoms are particularly well suited as both paper and blooms are subject to the test of time. (1)

← I Wish I Had Been There!!
Innovating Printing →