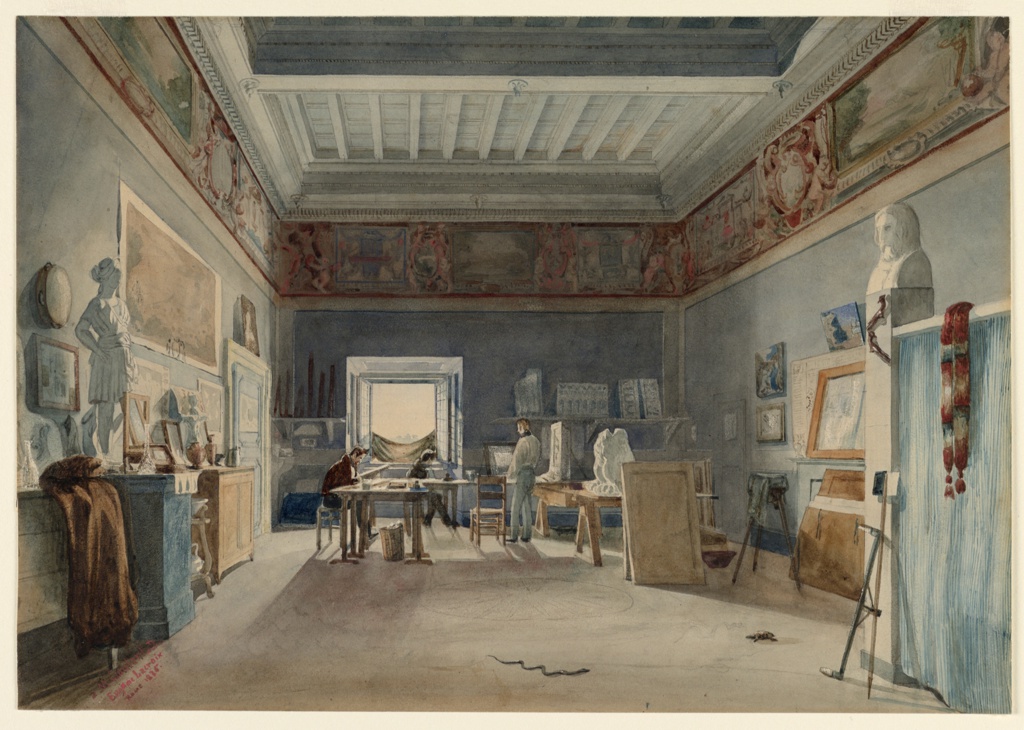 In the rear of a large atelier of the French Academy in Rome, three students (called pensionnaires) are at work. One, by the window, labors over a drawing; a second stands near a bas-relief, and a third, seated, bends over a work in progress. The remainder of the space is filled with studio equipment: canvases, stone sculptures and reliefs, portfolios, a traveling easel as well as evidence of student past-times.  A painted frieze on the upper walls identifies the space as the Stanza delle Imprese in the west wing of the Villa Medici where the Academy is housed.

Based on the inscription at the lower left (a M. Constant D./Eugene Lacroix/Rome 1835.), the artist of this work has been identified as Joseph-Eugène Lacroix (1814-1873) and the dedicatee as Simon-Claude Constant-Dufeux (1801-1871), Lacroix’s teacher.[1] Constant-Dufeux , after studying architecture in the École des Beaux-Arts Paris, won the Prix de Rome in 1829 and, with it, the privilege of training for five years at the Villa Medici.[2] A portrait of Constant-Dufeux shows him to have had a short beard and eye-catching up-turned pompadour combed back off his forehead.[3] Someone very similar appears in Cooper Hewitt’s Villa Medici watercolor, working at a drawing table on the left and closest to the viewer.[4]

Lacroix was the son of Désirée Favreaux, a lady in waiting to Queen Hortense of Holland, stepdaughter of Napoleon Bonaparte. Around 1828, Hortense was in exile from France, and living in Rome at the Palazzo Rospoli, where Eugène Lacroix, then a young teenager, and his sister were living with their mother. Hortense held an active social life, gathering artists, writers and political figures at the palace. It is possible that Lacroix met his future teacher Constant-Dufeux at one of these social occasions.  It is also probable that Lacroix, as an intimate of the Bonaparte family, visited one of Louis Bonaparte’s Etruscan archeological sites where Constant-Dufeux is known to have visited as well.[5] Another opportunity for Lacroix and Constant-Dufeux to meet arose in 1834, one year prior to this drawing. In 1834, Lacroix’s sister, also named Hortense, married the painter Sébastien Melchior Cornu, a former pupil of Ingres. In 1835, Ingres became director of the French Academy in Rome.  It may also be possible, then, that Eugène Lacroix met Constant-Dufeux through Cornu or Ingres. In any case, Lacroix became Constant-Dufeux’s pupil, in a relationship that probably began in Rome.

But why, other than getting into the light, are Constant-Dufeux and his fellow students pushed to the rear of the atelier, leaving the foreground space to be occupied by a writing serpent and a timorous tortoise? Thus far these animals have been considered as the pensionnaires’ pets, but given the placement of these odd creatures, could they have a special significance? Was Lacroix conveying a coded message to be shared with Constant-Dufeux? [6] Thus far, no fable or story has been found that fits the context of the Academy, Lacroix, and Constant-Dufeux. Hopefully such a device will soon be found!

[1] Originally thought to be the landscape painter, Eugène Lacroix (1825?-1885?) and the painter and printmaker Henri-Joseph-Constant Dutilleux (1805-1867), the artist and the dedicatee were identified by Talia Avisar, former graduate student in the Cooper Hewitt/Parsons, Masters Program in the History of Design and Curatorial Studies who did the basic study of the Via Medici drawing and upon whose research this brief essay is based.  See Avisar paper, “A Colorful Past:  The Story of a Villa Medici Watercolor,” 2008) in the Lacroix artist file, Drawings, Prints, and Graphic Design Department, Cooper Hewitt, Smithsonian Design Museum.  The inscription and date suggests this sheet might have been made originally for an album amicorum (friendship album) compiled before Constant-Dufeux left the French Academy in Rome. This idea was first proposed by David Van Zanten in a letter to Talia Avisar, December 11, 2008 in the Lacroix artist file.

[2] During his time in Rome, Constant-Dufeux aroused the censure of the Academy in Paris for not submitting his work on time, completing his projects, and adhering to the principles of ideal forms, among other criticisms.  The architect in training was caught up in the philosophical debates of the time that pitted the conservative purist academicians in Paris against the younger pensionnaires who believed that classical monuments incorporated historical and cultural transformations.  See Ghoche, p. 118.

[4] The pensionnaire near the window may be Victor Baltard (1804-1874) who, like Constant Dufeux, trained in Paris with François Debret and was well connected through his architect father (with whom he trained) and his father’s friendship with the celebrated Charles Percier.  After winning the Prix de Rome in 1833, Baltard came to Rome in 1834 and could have worked in the same studio as Constant Dufeux before the latter left Rome.

[6] A pentimento showing through the watercolor indicates that the snake at one point was placed above and close to the tortoise.