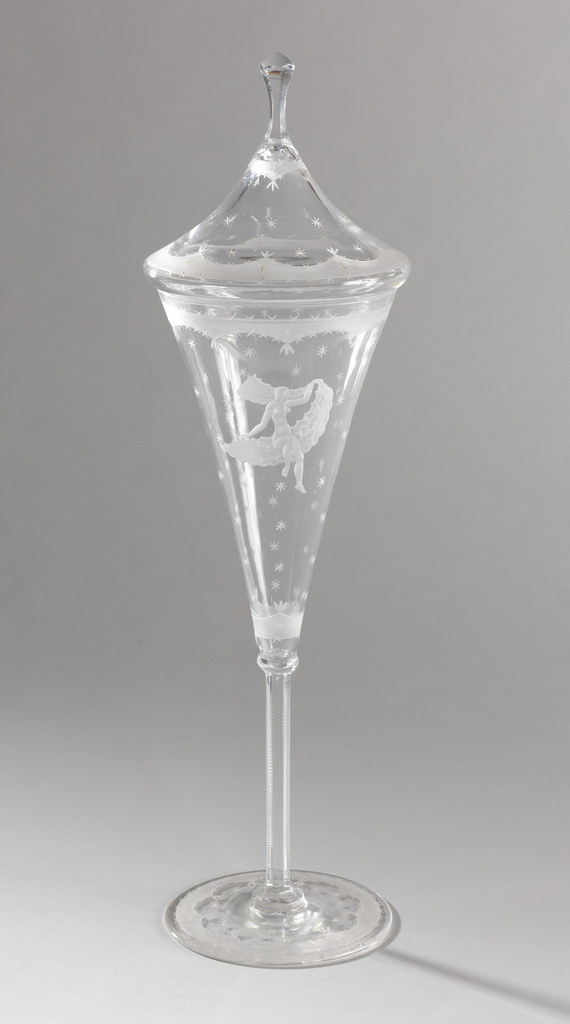 This tall glass covered vessel was designed in 1923, by Edward Hald, artistic director of the Orrefors glassworks in Sweden. It features engraved decoration of a female figure seated on a fluttering banner, amid a field of stars bordered by scalloped bands. The delicate star and band motifs are carried through in the vessel’s tapered cover and circular foot, accentuated by the elegant, attenuated notched knop and stem. This model was one of the glass pieces shown by Orrefors at the 1925 Paris World’s Fair.

The Swedish glasshouse Orrefors (founded in 1898) had only been making ornamental glass wares for about ten years when it created a sensation with its display at the 1925 Paris World’s Fair. Featured were a large group of luxurious decorative pieces with exquisite engraved ornament, and a range of drinking glasses and other domestic tableware designed by Edward Hald and his colleague Simon Gate. Both Hald and Gate won Grand Prix awards for their glass designs.

Hald came to Orrefors after studying painting under Henri Matisse in France. His designs for ornamental glass feature engagingly detailed pictorial compositions, enlivened by a breezy, sophisticated tone. He was equally known for more functional pieces, notably a series of drinking vessels in smoky-hued blown glass.

This model was made in limited quantities (this particular one was produced in 1929); another version is known in a public collection (the Smålands Museum, Väyjö, Sweden).

Reports on the Present Position and Tendencies of the Industrial Arts as indicated at the International Exhibition of Modern Decorative and Industrial Arts, Paris, 1925, Department of Overseas Trade, U.K., 1925, p. 143.