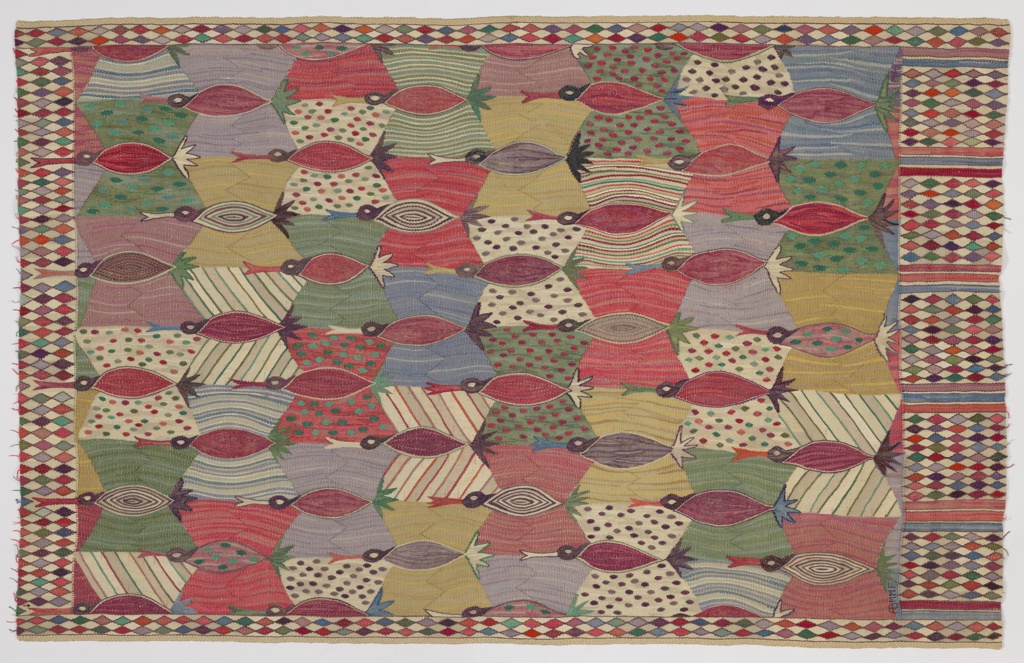 Posted by Kimberly Randall on September 4, 2017

At first sight, one is struck by the rhythm of the colors and the whimsical array of this slit tapestry panel. Then one becomes aware of the strong, underlying arrangement of flying geese straining forward in unison, their flapping almost audible! The outstretched wings deserve a closer look as they fill the sky in a riot of pattern – the weaver has enriched their surface here and there with “lazy lines”, a series of tiny slits that articulate the movement further and is unique to the tapestry weaving technique. Woven by the designer Marianne Richter herself, this is a rare and outstanding example of postwar Scandinavian design. In the design tradition of this rich period, Motley Birds is cited, along with her Cockerel tapestry panel, also of 1949, as breakthroughs in Swedish textile art, inspired by artists such as Paul Klee and Pablo Picasso, and by the tapestries of Jean Lurçat.

Along with her fellow student Ann-Marie Forsberg at the Technical Art School in Stockholm, Richter was chosen by their teacher Barbro Nilsson in the mid-1940s to work at the renowned Märta Måås-Fjetterström (MMF) company, Sweden’s foremost atelier for art textiles, founded in 1919. It became famous in the 1920s and 30s for its eponymous founder’s ability to fuse Nordic folk art with Jugend, Art Deco, and orientalizing aesthetics. Under Barbro Nilsson’s creative leadership from 1942, enduring carpet designs of the 1940s and 50s expanded the MMF legacy, and are still woven at the atelier in Båstad, Sweden. At auctions worldwide, vintage MMF hangings and carpets fetch record prices today, where one looks at the edges for woven-in signatures such as MMF/BN and MMF/MR.

Marianne Richter also designed carpets for industry, such as the Wahlbeck Company in Linköping that produced her affordable, machine-woven rya rug designs in bright and striking monochromes and geometrics, seen in many middle class Swedish homes in the 1950s and 60s. Her sense of color and design has been described as joyful, generous and devoid of the “calculating aestheticism” that characterized some other manifestations of the modern style (Hård af Segerstad, 165). [1] Herself a teacher at the Stockholm Konstfack art school, she also joined a group of likeminded artists in 1961, The Art Weavers, comprising most of the then active textile artists and designers, to promote their common interests.

Desiree Koslin studies and teaches historical and contemporary textiles and their social contexts. She also makes textile constructions and installations.

← A Young Beauty
The Palace Door →