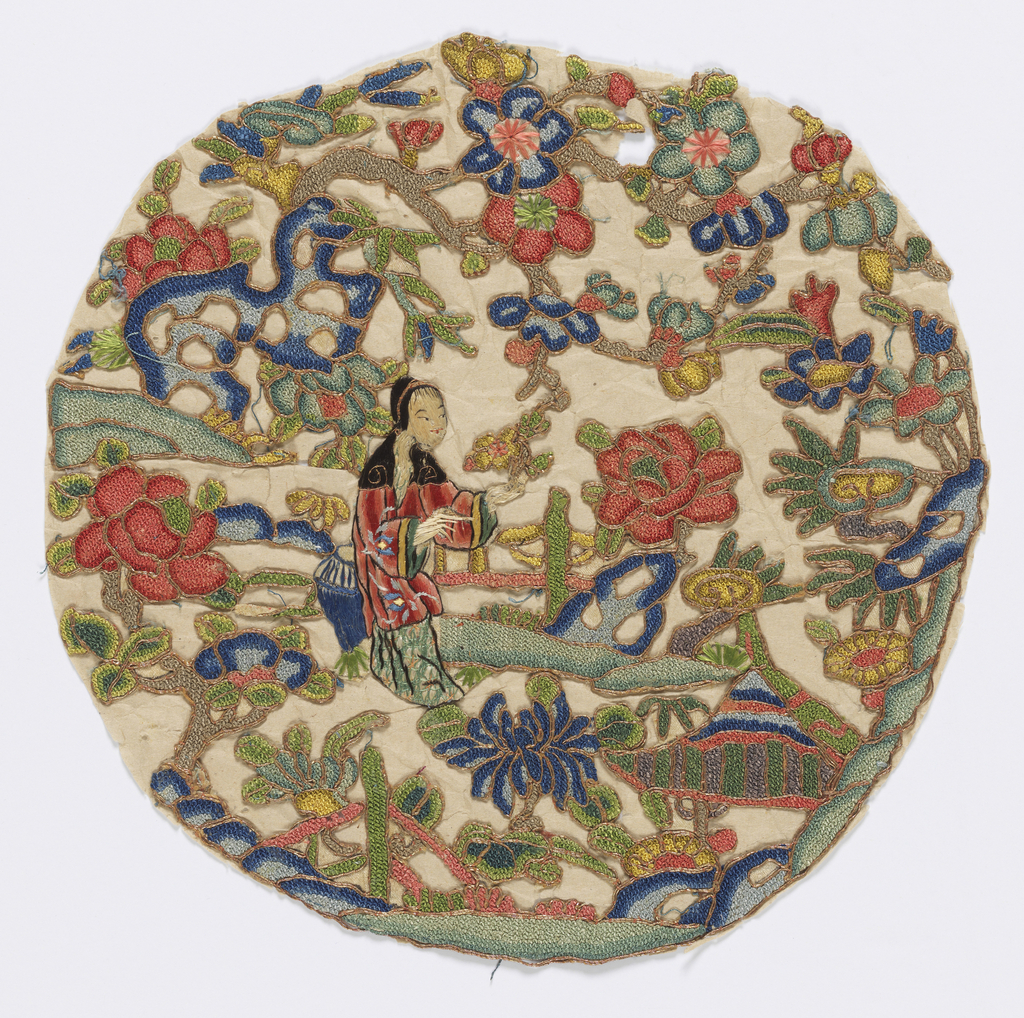 Posted by Kimberly Randall on September 3, 2017

This set of four roundels depicts a variety of figures— a young lady (above), a handsome scholar, elderly man, and an elderly man and young beauty— holding auspicious flowers, standing in natural settings filled with flowers, trees, lakes and pavilions. The figures might be generic—the rough drafting makes it hard to identify them—but they relate to a 19th-century fashion, in which eight, ten, or even twelve roundels were used to frame scenes taken from popular narratives of the period such as The Romance of the Western Chamber (Xi xiang ji 西厢记) or The Legend of the White Snake (Bai she zhuan 白蛇传).

The American Museum of Natural History has a similar set: twelve embroidered roundel appliques depicting scenes from The Romance of the Western Chamber. The AMNH roundels were acquired in 1910, probably in Shanghai, and they were catalogued as “embroidered silk pieces for applique work, to be used for bed cover.” Similar roundels were also applied to clothing, for example a jacket in the Peabody Essex Museum (E79506) gives a sense of what these roundels looked like once applied.

As with many such pieces, the Cooper Hewitt roundels have a paper backing, making it easy to appliqué onto an item of furnishing or clothing, and providing an accessible way to participate in the fashion for the narrative roundel. In these four roundels, the embroiderer has used different stitches to separate foreground and background, to pull the figures out of the scene and highlight the key details. While the figures are embroidered in satin stitch (with decorative details in metallic thread couching and basket stitch), the background is embroidered with knot stitches. Each component—flower, tree, bridge—is also given a couched edging, probably to strengthen the piece.

The roundel set demonstrates how popular plays and novels were represented in material culture, in particular dress and textiles, and the role of these commercially produced, fashionable accessories in allowing women to participate in local culture.

Rachel Silberstein is currently finishing a book on embroidery and fashion in nineteenth-century China, to be published by University of Washington Press.

← In the Pocketbook
Motley Birds →