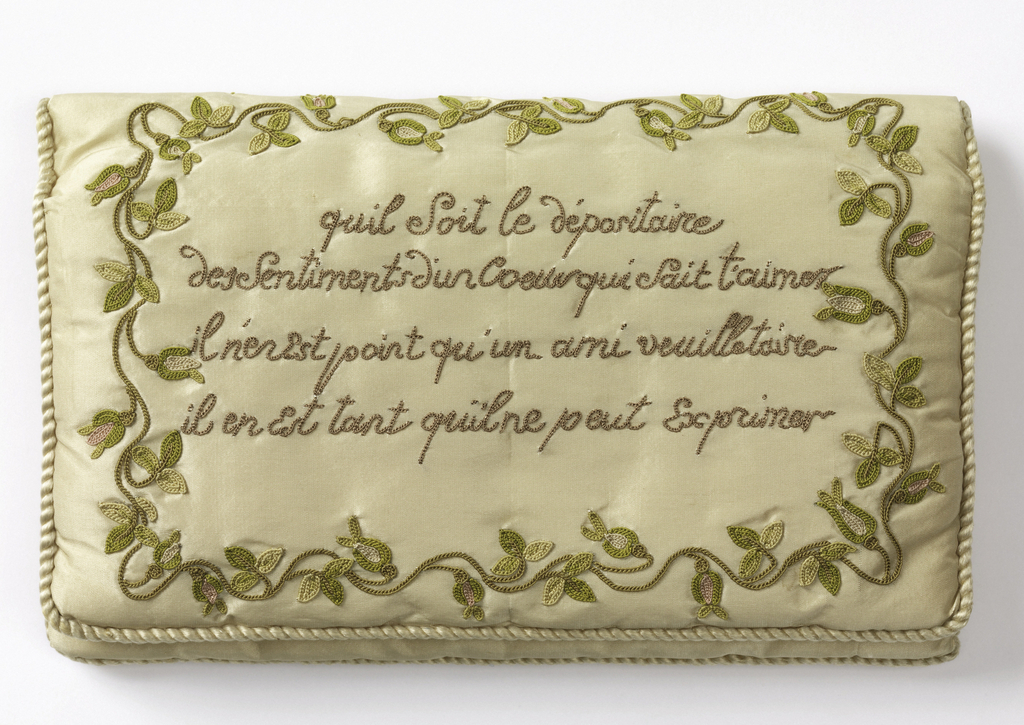 Posted by Kimberly Randall on September 2, 2017

While pockets, pouches, and purses were common money holders in the late eighteenth century, pocketbooks – or flat envelope-shaped receptacles with folded flaps – were the preferred carriers for objects of personal or sentimental value. Used by both men and women, the valuables they contained ranged from legal documents, keys, knives, and poker counters, to fans, handkerchiefs, smelling salts, mirrors, combs, and sachets. Pocketbooks were made from a variety of materials, but many, such as this example, were made from silk with embroidery. This example is made from silk taffeta with silk embroidery in chain stitches; its edges are wrapped with silk cord. The edging material was usually extended to form long strings, which, in lieu of a fastener, were wrapped around the pocketbook and tied to secure its contents.

Like many contemporary examples, this pocketbook was constructed from brightly-colored materials, and decorated with floral and vine motifs as well as an inscription. The inscription may be translated from French as, “May it be the guardian/ Of the feelings of a heart who knows how to love/ It is not a thing which a friend would want to be silent about/ It is conveying more than words can say”. At this time, women of all social classes were educated in needlework – the art or practice of sewing or embroidery – and pocketbooks were often made as gifts to loved ones. This example’s amorous text would have been particularly appropriate if the pocketbook was made as a gift for a fiancé or husband.

This pocketbook is, in fact, one of two surviving examples with such materials, motifs, and inscription; a second example, dated to 1775 – 1800, may be found in the collection of the Museum of Fine Arts, Boston. While very similar, the pocketbooks are not identical, suggesting that their designs were worked from the same pattern – a model used as a guide in needlework – with creative license taken by each pocketbook’s respective maker.

Laura L. Camerlengo is the Assistant Curator of Costume and Textile Arts at the Fine Arts Museums of San Francisco. She is a former Director-at-Large for the Textile Society of America, and the author of the DesignFile e-book, The Miser’s Purse.