This Leopard is Mine 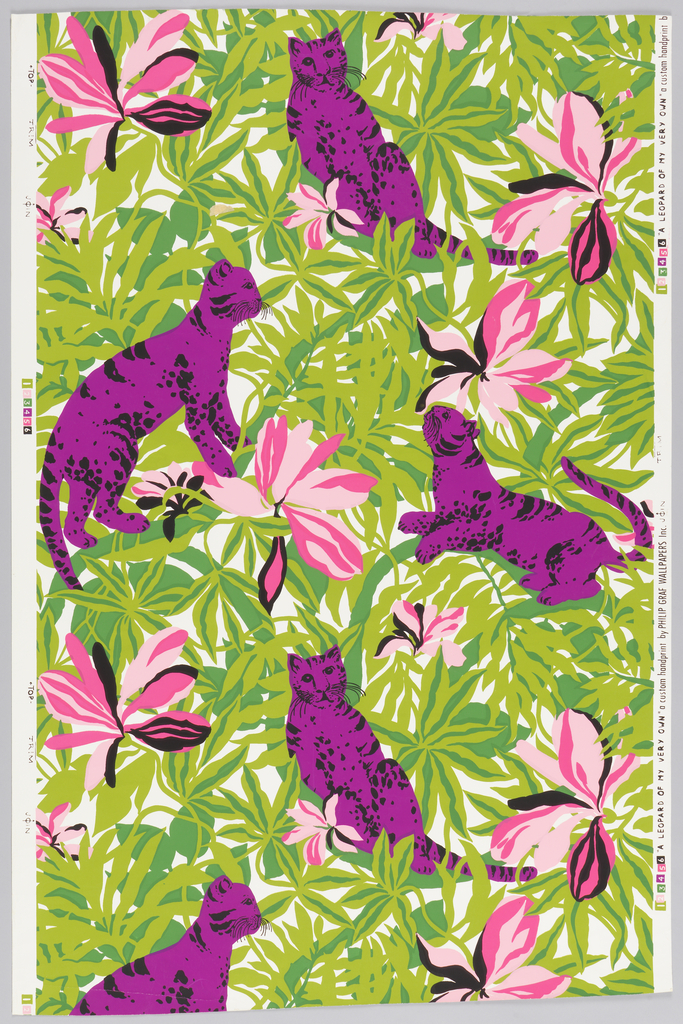 Posted by Gregory Herringshaw on July 8, 2016

This is a charming children’s wallpaper that would also be appropriate for a powder room. The design is naively styled with its cast of three leopards, exotic flowers, and lush foliage. The leopards are performing various acts of lounging or exploring, with the one directing his gaze directly at the viewer. The design is quite dense but keeping the palette to six colors including two pink, two green, magenta and black, prevents the design from being overwhelming. The complementary pinks and greens give the design its energy and make the leopards come alive.

While the design itself is pretty gender neutral (who doesn’t love cats climbing in trees?), the pink/magenta coloring makes me think this colorway would have been selected for a young lady’s room. From the end of World War II all through the 1950s there were very few wallpapers designed with girl’s interests. There were many papers designed with boys’ interests but girls were just supposed to like the pretty floral designs their mother’s would use. One exception to this was the Cinderella wallpaper designed by Ilonka Karasz in 1954. In the 1960s papers designed specifically for girls began appearing with designs of ballet dancers and more kittens. The later 1960s introduced Raggedy Ann and Holly Hobby. Pretty slim pickings considering the slew of new papers introduced for boys, but it was a start. It would take a few years but wallpapers for children did became truly gender neutral, with manufacturer’s creating a design of say, soccer bears, then printing it in a variety of colorways, typically lavender, blue, green, pink, yellow and red. I’m not sure where this paper fits into that scheme but maybe it was just ahead of its time. I could see this being colored with more natural-looking leopards and blue or red flowers to make this design more appealing to mid-century boys and their parents.

This wallpaper can be viewed in Cooper Hewitt’s Immersion Room, an interactive gallery where visitors can project wallpapers from the museum’s collection as well as create their own designs.

← Design and the Space Age
A traditional toran →

One thought on “This Leopard is Mine”

Was this was inspired by an early Lilly Pulitzer design fabric? Looks familiar.