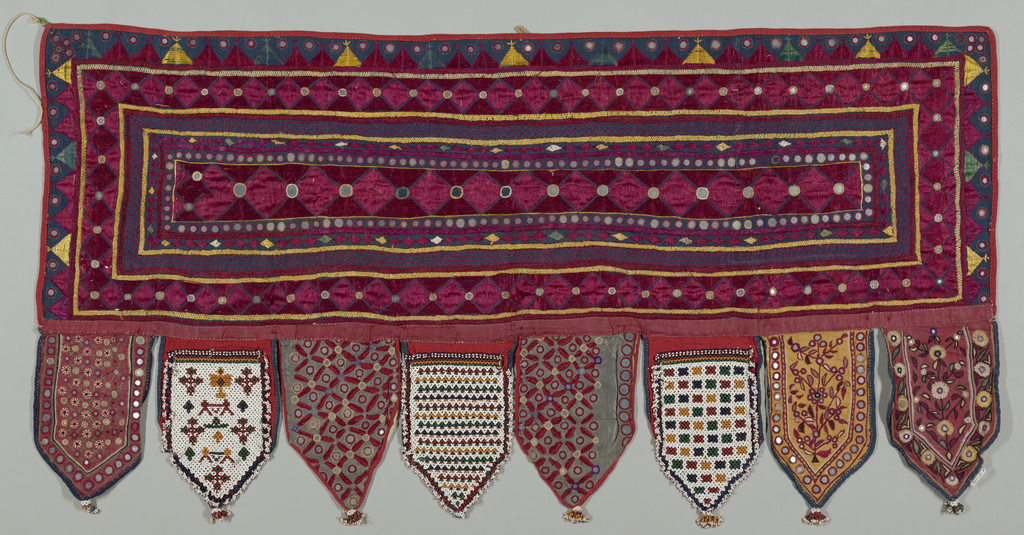 The toran is a frieze hanging named after a sacred gateway in Hindu, Jain, and Buddhist architecture. In the Gujarati communities of western India, a toran is hung above the doorway to the main room of the house as a sign of welcoming. This particular toran appears to be in the Kathipa style, recognizable by its two crenellated borders, geometric design, and repeating arrangement of diamonds, triangles, and mirrorwork.1 It is silk embroidered on a blue cotton foundation, with mirrors inset around the borders and at the interstices of the design. On the back of the toran is the label “Janeshi Lall and Son,” an art dealership founded in 1845 that is still active today. The nonfigurative design is embroidered in purple and red, with detail triangles in yellow-gold, white, and green. These colors show brightly against the whitewashed walls on which the toran would be hung, as shown below: Women of the Kathi landlord caste were the first to practice embroidery in the Kathipa style, until they switched to beadwork over a century ago. This toran makes use of both, with three of its pennants crafted entirely of beadwork. Traditionally, torans are a work of domestic embroidery. They might be a part of a woman’s dowry, wrapped in an square hanging called a chakla and brought to her in-laws’ home after her wedding. The textile isn’t bought, but made by the hand of the person who will live with it. The use of textiles in important events like weddings reflect the importance of embroidery in the lives of the Kathi people. The toran’s geometric motifs help to tell a history, both now and in its original context(s). Its eight hanging pennants are stylized mango leaves, symbols of love and fertility blessing the happy couple. The essential toran can be made by simply stringing mango leaves. The use of red might evoke reverence for the sun.2 The embroidery practices of the communities in the Saurashtra region have changed over time. While this toran from the 19th century is hand-embroidered, this practice is becoming less common as women in agricultural and pastoral societies have begun to work outside their home. With less time and higher income, women opt to have embroideries professional stitched, with the aid of a machine.3 Traditional motifs have changed over time, as well; where one might have seen a haathi (elephant) motif, one can find a saikal (bicycle).4 Embroidered textiles continue to narrate the histories of pastoral communities, now reflecting the move to a market economy, cross-cultural influence, and technological innovation.

Shahzeen Nasim is a summer 2016 Peter Krueger intern in Cooper Hewitt’s Textiles Department. She has a BA in English Literature from Haverford College, Haverford, PA.

← FIND YOUR BEAST!
Pottery and Progress →