Design and the Space Age 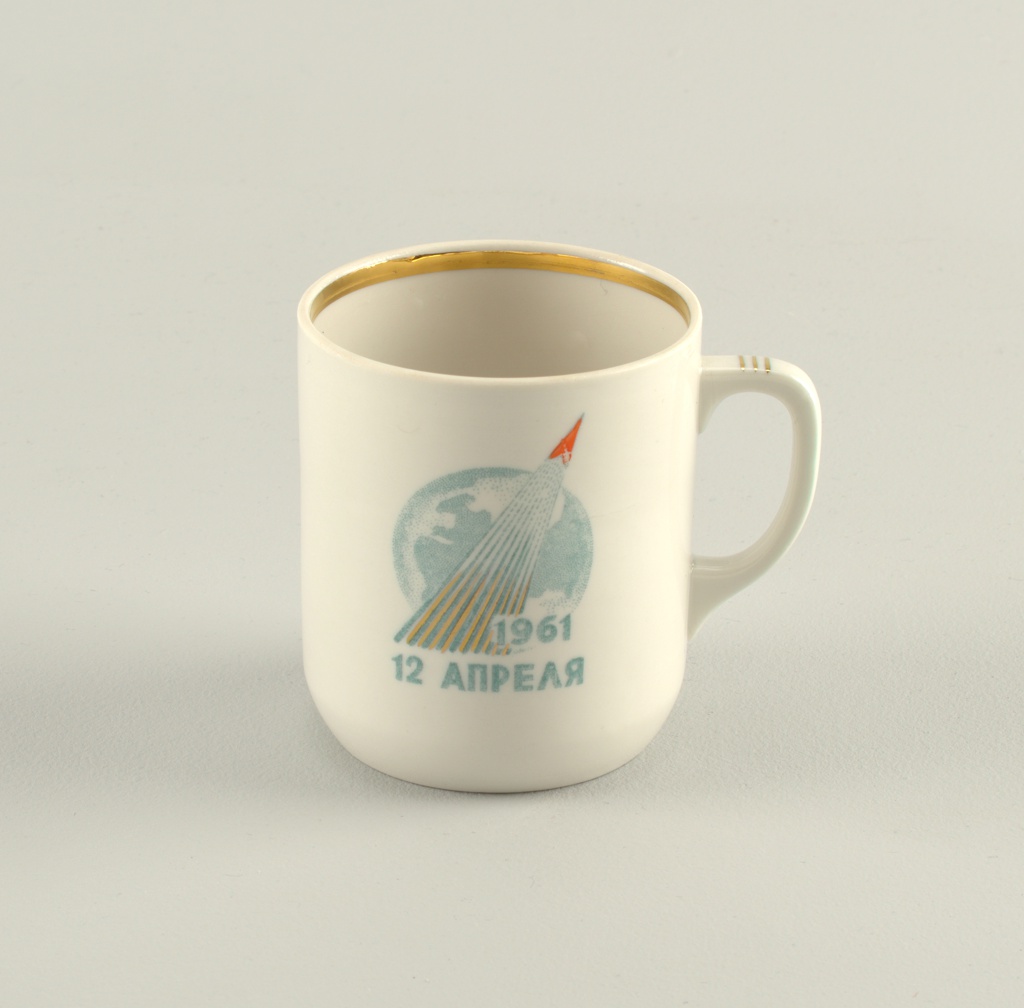 This porcelain mug commemorates the day that the Soviet Union sent the first human into space. The mug features the date, April 12, 1961, that Yuri Gagarin’s launch took place and it depicts a rocket, embellished with gold, moving past an image of the earth. The mug was manufactured by the Dmitrov Porcelain Factory which was founded by an Englishman named Francis Gardner in 1766 and based in the small town of Verbilki near Moscow. [1] It was one of the most successful porcelain factories founded during the reign of Catherine and was also one of the few factories to survive through the revolution. At the point of this mug’s manufacture, the USSR already had a long history of porcelain. Russia, like France and Germany, became interested in porcelain after seeing imported Chinese examples. They began to manufacture their own porcelain goods, and Russia developed its very own distinctly Russian style of craftsmanship. [2] However, from the 1950s onward, Soviet porcelain production in factories was mechanized, and “by 1960, the bicentenary of its founding, the Dmitrov Porcelain Factory was producing thirty million pieces per year.” [3] Thus, the porcelain mug we see here was most likely machine manufactured. The imagery and content on the mug is typical of Soviet porcelain decoration of this period as it emphasizes the accomplishments of the country and celebrates national identity.

In fact, it is very common to come across this theme of space age exploration in Soviet design. There are numerous examples of “pointed nosecones on lapel badges and postage stamps, while further galactic adventures [were] enacted across the lids of biscuit tins.” [4]

This plate shows an image of Sputnik 1 circling the globe in space. Sputnik 1 was launched October 4th, 1957 and was the first artificial satellite to orbit the planet.

Also from the museum’s collection, this porcelain figurine depicts Belka and Strelka, the two dogs that were launched into space as part of the Soviet space program. On August 19, 1960, Belka and Strelka became the first ever living creatures to survive orbital flight. When they returned to earth, they became cult figures, and this figurine commemorates their important journey.

The late 1950s and early 1960s witnessed a peak of interest in space travel, and this was not only true in the USSR. The space race between the Soviet Union and the United States fueled people’s fascination with space travel in both countries. Cars, homes, and furniture took on bulbous, futuristic, and spaceship-like forms, and space travel also had an impact on art and literature of the period as well. These examples of Soviet porcelain reflect their historical context and provide a glimpse of the past at a fascinating and pivotal moment in human history.

[1] Ian Wardropper, News from a Radiant Future: Soviet Porcelain from the Collection of Craig H. and Kay A. Tuber (Chicago, IL: Art Institute of Chicago, 1992), 17.

[4] Oliver Wainwright, “The Dogs that Conquered Space,” The Guardian. 2 September 2014.

← Only in America
This Leopard is Mine →