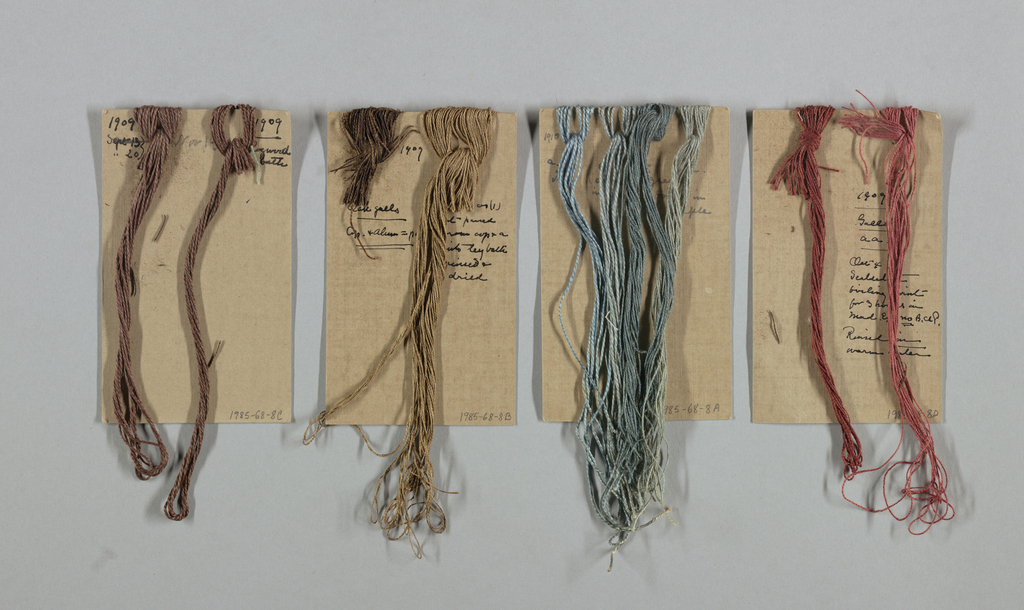 Posted by Kimberly Randall on September 7, 2020

September is New York Textile Month, a citywide celebration of textile creativity. As in past years, the museum is collaborating with the Textile Society of America. A non-profit professional organization of scholars, educators, and artists in the field of textiles, TSA provides an international forum for the exchange and dissemination of information about textiles worldwide. Four former presidents of TSA will author Object of the Week posts this month.

Dyeing color from nature is an ancient art, a skill akin to cooking combined with extensive knowledge of natural science. Recipes for dyeing textiles have been preserved in Babylonian clay tablets from 600 B.C.E., Egyptian papyri (written in Greek) from the 3rd century, and since at least late Medieval times in Europe in sample books that include swatches of dyed fabric or yarn samples. Written by skilled and knowledgeable practitioners, these documents often described the dyestuffs, additives, type of dye–pot or vessel used, and fiber of the material to be dyed, in addition to recording the color achieved. Metallic salts such as iron, alum, or copper, which act as mordants, and various acids from citrus or fermented fruits, or alkalines from chalk and urine, used to modify the pH of the dye bath, were part of the dyer’s tool kit. The slightest modifications to a dyebath can change the range and hue of the resulting color, so careful record-keeping is fundamental to ensuring the reproducibility of the desired color.

These dye record cards reflect the efforts of the Deerfield Society of Blue and White Needlework, an embroidery collective founded by Margaret Whiting (1869–1946) and Ellen Miller (1854–1929) in the 1890s in the historic New England hamlet of Deerfield, Massachusetts. Whiting and Miller were influenced by both the Colonial Revival and Arts and Crafts movements and sought to revive traditional textile production by modeling their work on examples preserved in the historic houses of the village. The Arts and Crafts movement was, in part, a reaction against the synthetic dyes first invented by William Henry Perkin in 1856, and these dye cards show the Deerfield embroiderers experimenting with dyestuffs that had been used for millennia: madder (Gallium) red from the dye-filled roots of a perennial plant, indigo blue from the leaves of a number of different species of shrub, Logwood purple from the heartwood of swamp trees from the Yucatan in Mexico, and oak galls (with copper and alum, according to the notes on the card) for brown. They reflect a different type of historic preservation effort – one focused on recovering and retaining fading knowledge of the art of dyeing.

Elena Phipps is an independent scholar, curator and author who specializes in the study of textile materials and techniques in cultural contexts. She was President of the Textile Society of America (2011-14) and former Senior Conservator at the Metropolitan Museum of Art for 34 years. She currently teaches at the University of California Los Angeles.

← Mary Hallock Foote: A Summer on Long Island
Only Seeing  →