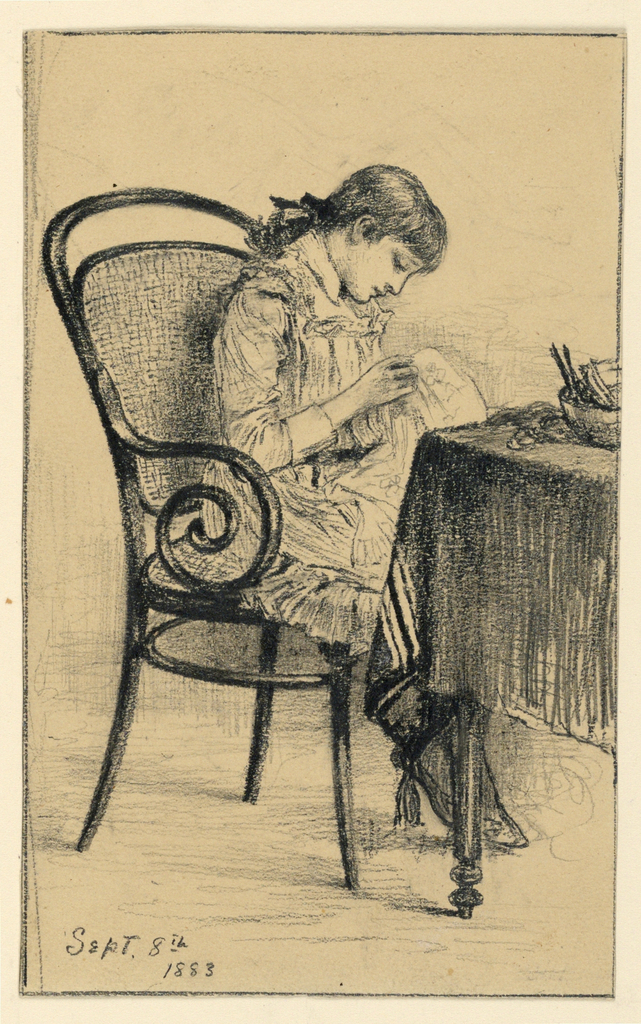 By the end of her artistic career, Mary Hallock Foote was one of the most recognized illustrators of life in the American West. Often focusing on images of women and children, her illustrations provided a vision of the West not simply as a rugged frontier but as a place where families could live and prosper.[1] In addition to working for periodicals  like Scribner’s Monthly and The Century Magazine, Molly (as she was called) wrote and illustrated twelve books and four short story collections of her own.[2]

After spending her early life in Milton, New York, and receiving an artistic education at the Cooper Union School of Design, Molly began publishing her work in magazines in the early 1870s  and illustrating special edition novels.[3] In 1876, she married Arthur de Wint Foote, a mining engineer. His career took them across the West, providing ample inspiration for Molly’s illustrations.[4] However, in 1883, when this drawing was made, Molly found herself briefly back East in a period of transition.

Her husband had gone ahead to Boise, Idaho, to work on an extensive irrigation system.  Molly and their two children were to join him later. They spent the summer at a cottage at Point Lookout on Long Island, New York, next to a property rented by James and Mary Hague, Molly’s sister-in-law.[5] There, Molly sketched the couple’s two daughters, her nieces Eleanor and Marian. In this drawing, Marian is shown sitting in a bentwood caned chair, with her head bent over her sewing and her feet dangling just above the ground. Attentive to detail, Molly captured the effect of light hitting the young girl’s hair and the chair’s spiral arm.

Molly was initially apprehensive about the coming move to what she called “darkest Idaho.”[6] Despite Molly’s trepidation, the move back West would serve as one of the defining moments of her career.[7] Some of her most popular works were created in Boise, including a set of eleven illustrations published in The Century Magazine in 1888 and 1889. This series, titled “Pictures of the Far West,” included images like “The Irrigating Ditch.”[8] Molly closely observed infrastructure development through her husband’s work, and her stories and illustrations reflect a positive perception of the changes brought by settlers to the West. Here, a woman stands beside an irrigation ditch holding her child. As she wrote in the accompanying story, Molly saw the irrigation paths as “strik[ing] a new and shriller color-note, which quavers through the dun landscape like the note of a willow whistle on warm spring days…dearly welcome to the traveler after days of nothing but sky and sage-brush, sun and silence.”[9]

In “The Irrigating Ditch,” the woman’s head appears in profile, gazing downward as she observes the channel described in the accompanying text as “a new stitch” in the “skirt of the desert’s dusty garment.”[10] This position is reminiscent of young Marian’s head bent over her sewing in the earlier drawing. Whether in a cottage on Long Island or on the Western plains, Molly’s focus is on capturing a moment of family life.

Marian Hague herself would go on to be an avid connoisseur and collector of textiles, and donated more than 500 textiles to Cooper Hewitt. She also donated sketches by Mary Hallock Foote—including this one—from that summer they spent together on Long Island in 1883.