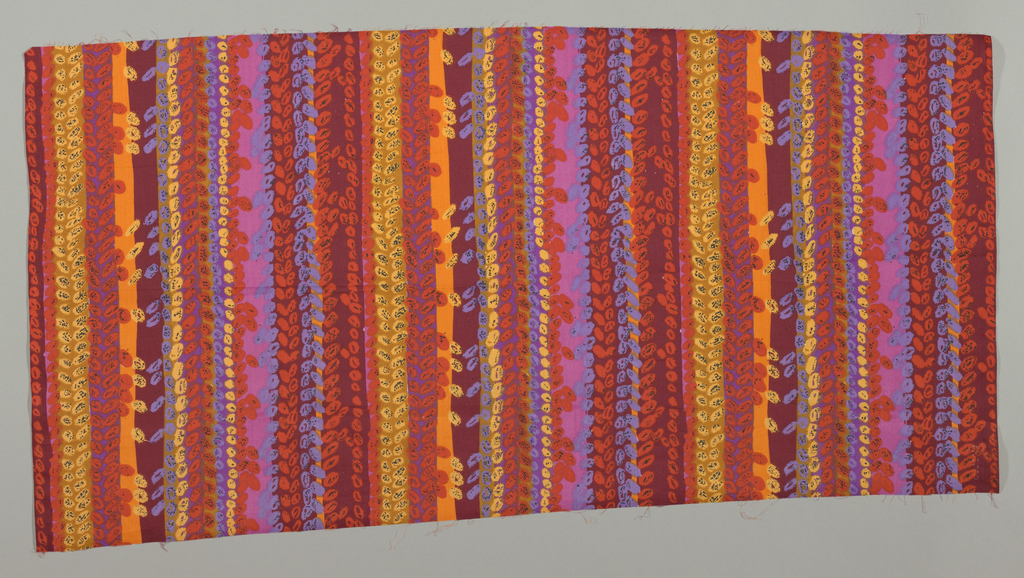 As part of the African-Caribbean diaspora of the mid-twentieth century, textile designer Althea McNish had a lasting impact on British design over the course of her career . Born in Port of Spain, Trinidad, she studied painting and worked as a cartographer and illustrator for the British government there. [1] In 1951, she and her mother left the island to join McNish’s father in London. She studied graphic design at the London School of Printing and Graphic Arts where she learned screen printing to produce multiples of her artwork. Aware of the exciting work made by students of Pop artist and instructor Eduardo Paolozzi at the Central School of Arts and Crafts, McNish took evening classes with him. After witnessing McNish’s obvious talent and innovative approach to screen printing, he encouraged her to continue her studies in textile design at the Royal College of Art. [2]

It was at RCA’s graduate show that Arthur Stuart-Liberty of Liberty department store first saw McNish’s designs for textiles. Taken with their bright tropical colors and freedom of line and ready to shed British post-war conservatism, he invited her to develop a line of fashion and furnishing textiles. Cooper Hewitt’s length of McNish’s fabric for Liberty, entitled Tepeaca, is a 1960 design said to be inspired by lengths of African beads.

As Britain’s first Black textile designer of international acclaim, McNish would go on to produce some of her most popular textiles for Heals Fabrics and Hull Traders; Golden Harvest, a dramatic design of wheat sheaves, was an immediate and enduring best seller for Hull Traders. In 1962, McNish was chosen to decorate the first embassy building for newly independent Trinidad and Tobago in Washington, DC. [3] Her tropically themed murals decorated private homes and the cruise ship SS Oriana, and British Rail commissioned velvet hangings for its Euston offices. McNish also designed fabrics for fashion; her clients included Zika Ascher for Christian Dior, Biba, Pierre Cardin, and Mary Quant.

Her successful freelance practice left her free to explore many opportunities such as exhibiting her artwork, teaching, broadcasting and lecturing. [4] McNish’s husband, designer John Weiss, stated that while always receptive to the work of other artists and designers, she maintained her own vision and wasn’t swayed by changing styles or trends. Her commitment to tropical themes and vibrant colors remained constant throughout her lifetime.