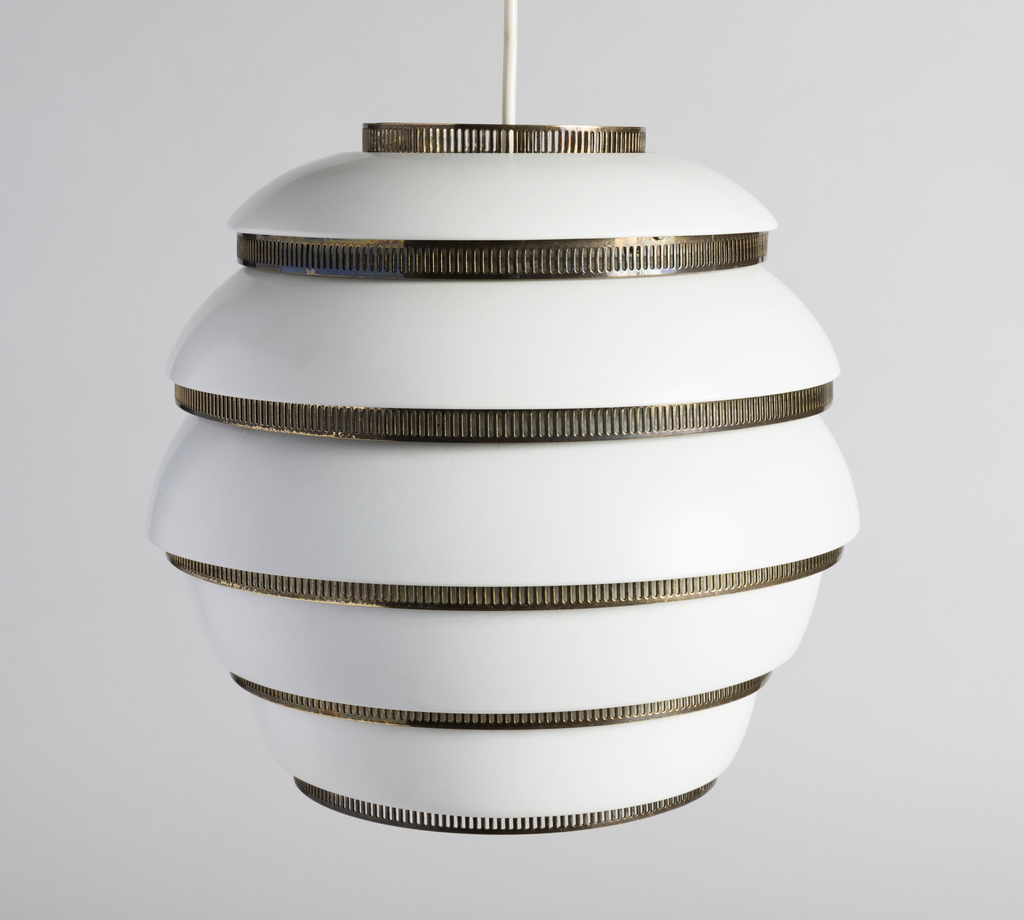 “A lamp… [is] always part of an environment…. When working on… public building[s], I noticed that such furnishings and appliances were necessary to create the right unity, and then I designed them. The fact that later on they can also fit in another environment is another story.”[1] Lighting had become a significant part of Alvar Aalto’s approach to architecture as early as 1927-32, when he and his wife Aino (1894–1949) designed the buildings, interiors, and furnishings of the Paimio Sanatorium in Finland. For Aalto, lighting functioned as one of many integrated components that could transform people’s surroundings. He initially designed many of his lamps for specific building projects, then went on to mass-produce them for the general consumer market. The model A331 hanging lamp, originally designed  by Aalto in 1953 as part of the furnishings program for his buildings for the University of Jyväskylä in Finland, is one example.

Attentive to the psychological and sensual aspects of design, Aalto strove to humanize modern architecture. He employed organic materials throughout the spaces he designed, and modulated light itself as an interior element. The A331 lamp casts both a bright directed light for focused activities and soft ambient light for atmosphere. Aalto was inspired in part by  Danish lighting designer Poul Henningsen’s  (1894–1967) research into electric lighting and optimal light diffusion and dispersal. The A331 lamp’s ovoid structure is composed of horizontal, curved, white-enameled metal slats that serve as reflectors directing light downward. They alternate with narrow brass bands pierced with small vertical slits that allow a diffused glow to emanate through the wall of the lamp. The slits also vent heat produced by the fixture’s incandescent bulbs. The  A331 lamp’s minimal  design is highly functional, while its rounded form, proportions, and warm glow combine to create an organic, sculptural appearance suitable for large public spaces or small domestic interiors.

The hanging ovoid form resembles a beehive, inspiring its moniker, the “Beehive” lamp. The form was available in white, black, and other colors, including dark blue. It also came in a longer, six-slatted variant, the A332. The A331 lamp was, and still is, marketed by Artek, a company co-founded in 1935 by the Aaltos to sell their designs. The A331 has remained one of the firm’s most popular lighting fixtures for over sixty years.

One thought on “Aura of Light”

“Familial occipitotemporal lobe epilepsy and migraine with visual aura”. Neurology.org. Archived from the original on 2007-09-27. Retrieved 2017-05-21 .