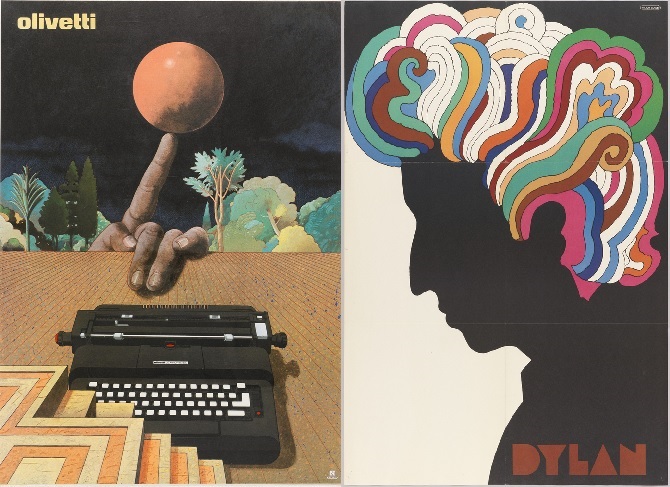 Milton Glaser (1929–2020) was a giant figure in the history of graphic design. Born in the Bronx to immigrants from Hungary, Glaser graduated in 1951 from The Cooper Union for the Advancement of Science and Art, where he and other students received full-tuition scholarships from the endowment established by Peter Cooper. Glaser also studied in Bologna, Italy, with the painter Giorgio Morandi. This New York kid mixed together commercial art and fine art to create a potent new language. He co-founded Push Pin Studios in 1954 with friends from Cooper Union. Based in New York City, Push Pin became an international force in the 1960s and 70s, with a legacy that continues to inspire designers and illustrators today.

Glaser is best known among designers for his illustrated posters and album covers. His Dylan poster (1966) became an enduring symbol of a unique era in American pop culture, while his posters for Olivetti mashed together his triple love for Renaissance art, Italian design, and American comic books. “I Love NY” (1977), a campaign promoting tourism in New York State during a dire period of economic crisis, became a global meme subject to endless variation and an indelible symbol of New York City.

Glaser was also a formidable art director and publication designer. In 1968, he started New York Magazine with editor Clay Felker and designer Walter Bernard. In the beginning, they ran the magazine out of the top floor of Glaser’s townhouse on East 32nd Street. New York’s juicy, jazzy typography and ambitious editorial concepts launched a new era in publication design.

Glaser was a generous teacher. From 1960 to 2002, he taught a course called Design and Personality at New York’s School of Visual Arts, in which any designer could enroll with an interview. After 2002 he taught in the SVA’s MFA Design graduate program. He also taught at Cooper Union. Hundreds of designers had the unique privilege to spend intensive time with this kind, caring critic and educator.

As a tribute to this legendary designer, we reached out to designers, students, and friends from different generations to find out what he meant to them personally and to the broader practice of graphic design. These tributes not only show what a beloved person Glaser was, they also contribute to our historical assessment of his impact on the field.

“Milton Glaser was a model, mentor, teacher,  and rabbi for so many in a field that we love (and hate and love to hate and want to fix) and love again. He was a father, grandfather, uncle, and medicine man, who opened doors of perception and perceptive thought. I’m reluctant to sum up his life in Twitter cadence (Gov Cuomo did a nice job). But I’ll say this: he never left his opinions unsaid or beliefs dormant. His commitment to social justice was not a brand, and he insisted that if you don’t really believe, don’t waste your time just making a poster. But if you do believe, fight for it with all the strength you can muster in all the media available.”—Steven Heller, designer, writer, and historian

“In the ’60s, Push Pin Studios inspired a whole generation of illustrators and graphic designers, me among them. The work combined eclectic, often historic typography with illustrations that were idea-based, not nostalgic. They were the antidote to ultra-clean, heavily organized Swiss Modernism, which was the language of big corporations. Milton Glaser was the leader of the pack because he was as articulate as he was visually talented.”—Paula Scher, graphic designer

“At SVA MFA Design, Glaser gave us our assignment before the first class: bring a source of light. We all showed up with some variation on a light bulb. For the next three hours, he taught us to see beyond the obvious and set an expectation for rule-breaking, even when the assignment came from a famous designer like him. Milton Glaser is our source of light.”—Bobby C. Martin, Jr., Champions Design; student of Milton Glaser

“He was generous, not only with his time, but with his ideas about design, love, and especially truth. He reminded us over and over again that our role as designers is to tell the truth and to help people. He also taught me how to really see. Milton had an amazing way of seeing your intent, even if your hands couldn’t get you there. He had x-ray vision.”—Mike Essl, Dean, Cooper Union School of Art and student of Milton Glaser

“Like with all “famous” graphic designers, most people will know him only for his icons—a few posters and the NY logo. He was lucky to have created such iconic pieces, but his influence goes well beyond. Milton’s name stands for a whole school of graphic design that overcame the European, Swiss-dominated influence after the war and showed that design can be useful and fun at the same time. His work proves that design is an intellectual activity which, in the hands of a master like him, can also entertain, amuse, and inform.”—Erik Spiekermann, designer

“Milton was the first graphic designer I’d ever heard of—as a high school kid in Nebraska in 1971, when I found out that the same guy had created both the poster in my Dylan’s Greatest Hits album and  New York Magazine, which I’d just discovered. After I became editor of New York 23 years later, I met him, which disproved the cliche about meeting one’s heroes being disappointing.”—Kurt Andersen, author

“I consider Milton a pillar of the history of graphic design and of the MoMA collection. On a personal level—as a person who thinks that design is the highest form of human creative expression—I was always struck by Milton’s intellectual and physical stamina. Curious, critical, always ready to argue, generous, truly dedicated, never complacent, never patronizing. No small talk, bless him. Every lunch at Maialino with him was a whirlwind of stories, gossip, questions, and answers.”—Paola Antonelli, curator

“In Brazil, the memorable “I heart NY” concept has been adapted across the nation. In my hometown Porto Alegre, the red heart is replaced with the shape of our traditional drinking cup. A sign in Belém uses two mangos to resemble a heart. Each place picks its own symbol to express love for its community inspired by Glaser’s love for NY.”—Raquel Castedo, designer and historian

“His designs graced the covers of the Shakespeare books I read in school, and the bottles of Brooklyn beer I drank. Milton was also an activist, who spoke out eloquently against the war in Iraq, and created political covers for The Nation and worked for nonprofit organizations like Landmark West!. He was civic-minded, generous of spirit, a humanist.”—Nicholas Blechman, illustrator, author, and art director

“Despite his fame, Milton Glaser always struck me as one of “the people.” His work, his writing, and his teaching all reflected genuine care for others, a desire to make them joyful, enlightened, sympathetic, understood. He was everyone’s graphic designer.”—Louise Sandhaus, design historian and co-founder of The People’s Graphic Design Archive

“I was invited to interview Milton on stage at Cooper Hewitt in 2010. Backstage, I mentioned I was on the fence about creating a book to teach graphic design to children. What did he think of that? His eyes lit up and he said ‘Oh my GOD, do it! That’s a great idea!’ I was so relieved. I had just gotten the best permission ever. Thanks, Milton.”—Chip Kidd, designer and author

“About 17years ago, I decided to build a small house in Woodstock, NY, where Milton lived and was quite revered as a famous artist. Milton immediately decided who would design the house, and told me to please show him photos of the construction. At one point, I sent a picture of the back of the house, saying that I worried the window configuration made the house look like a big grimace. He wrote back, simply saying, ‘No, Gail—that’s not a grimace. It’s a smile.’”—Gail Anderson, designer

“Farewell, my friend. I’ve known you for 45 years, and you have never ceased to inspire me, first as a teacher, next as my first boss, then as a mentor and colleague, and ultimately dear friend to me and my family. What set Milton apart was not his passion, but his compassion, which, with his intelligence, made him a superpower. Rest In Peace, dear friend, you’ve earned it!”—Stephen Doyle, designer

← Framing The Bullies
A Surprise Victory for Robert Mylne →

“Even here, in the Upper Midwest, to me, New Yorker Milton Glaser (20 years my senior) was one of my many exemplars. Though our paths crossed, he was not one of my teachers or mentors – I never attended any of his classes or workshops and I had only met or seen him, in person, a few times at conferences or presentations (for examples, I had attended his discussion at the “Shop Talk” 1977 International Design Conference at Aspen [IDCA], Aspen, Colorado, and his presentation at a Minneapolis Art Directors Club/Advertising Federation of Minnesota luncheon) – his work inspired me, as I imagine countless others of a certain time. One of the inspiring, related books I recall from early in my career was “The Push Pin Style” (Palo Alto, California: Communication Arts Magazine, 1970). Milton Glaser lives on through his exemplary art and design and his positive, far-flung influence on many who continue working in the field. … about my comparatively modest career summary, including mention of Milton Glaser, see http://www.patrickredmonddesign.com/about/briefbiography.html . Serendipitously, the Milton Glaser-designed Minneapolis Institute of Art “MIA” logo version shown at the lower left of the webpage http://archive.artsmia.org/modernism/ appears near the ‘M-O-D-E-R-N-I-S-M’ wordmark I had designed!” – Patrick Michael Redmond, M.A., designer

While I was a former national member of New York-based Graphic Artists Guild, I was honored that my work was included, alongside work by designer Milton Glaser, in a national, full-page advertising campaign for Mohawk Paper which also featured work by a variety of other Graphic Artists Guild members. The ad, a two-sided, bound-in insert printed on Mohawk “Pure White Irish Linen Text, 80 lb.” paper, was part of the “When you want to look good on paper, Mohawk” campaign, in this example featuring “You can look good on new Irish linen, Mohawk.” See Art Direction, The Magazine of Visual Communication, October 1981, p. 57-58. – Patrick Michael Redmond, M.A., designer