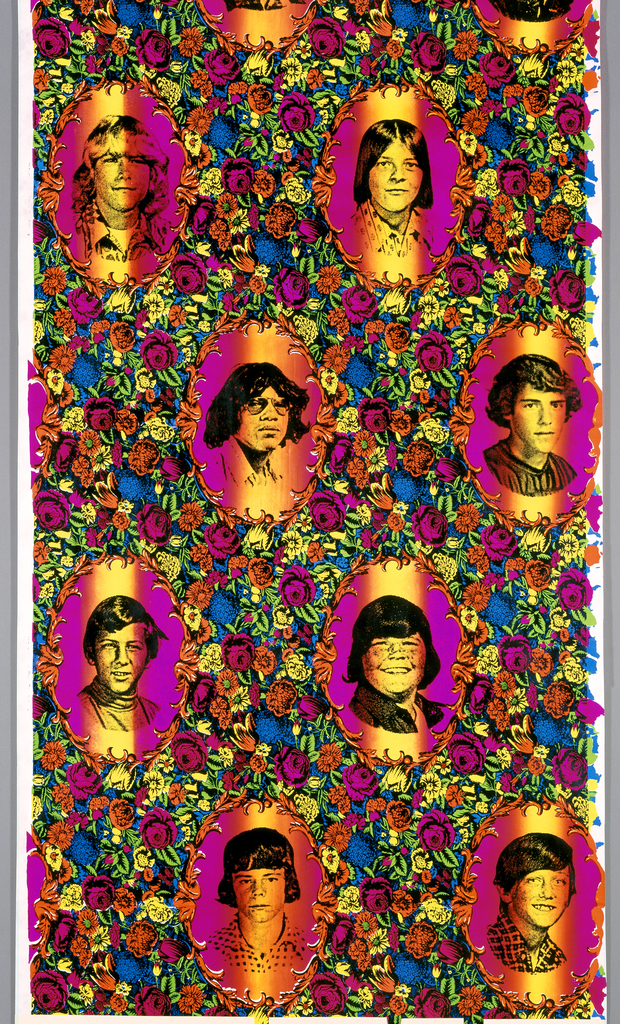 Bright-faced youths peer back at you from a vibrant web of floral foliage. But this wallpaper, titled Bullies, strikes a scornful tone.

Multi-disciplinary artist Virgil Marti sourced the portraits seen in the wallpaper from his junior high school yearbook, selecting pictures of boys who had bullied him. When Bullies was displayed at the Armory Show art fair in New York in 1999, art critic Holland Cotter described it as “every shy, gay 98-pound weakling’s idea of sweet revenge: to enshrine the bullies of the world in a public Hall of Shame.”[i] Revenge can be a dish served cold, or simply screen-printed on Tyvek.

Designed in 1992, Bullies was first installed in the boiler room of a former elementary school in Philadelphia—the choice of place alluding to secluded spaces, away from supervision, that often precipitate adolescent bullying and other mischievous activities.[ii] The paper was also cheekily installed in the men’s restroom on a wall behind a row of urinals at the Fabric Workshop and Museum in Philadelphia, where Marti is a master printer. Marti often designs his wallpapers to be installed in a variety of locations, allowing the different physical contexts to inflect their meaning.

The tension between “good taste” and “bad taste” permeates Marti’s work. In Bullies, the wallpaper’s pattern is an appropriation of the eighteenth-century French toile motif, which typically boasts vignettes of pastoral figures embedded in leafy, flowery frames. But Marti intentionally bastardizes this traditional pattern, saturating the color palette to a garish flamboyance with Day-Glo inks, burdening the visually busy surface texture with black velvet flocking, and maintaining the boys’ 1970s hairstyles. In doing so, he feminizes the boys and questions our attachment to the status of objects, however we encounter them.

Marti came to wallpaper as an extension of his work in painting, enjoying the constraints of the medium imposed by architecture.[iii] Bullies was his first foray into wallpaper, and is part of his larger interrogation into the nostalgic and cultural meanings that wallpaper and interior decorative elements can hold for people. The color palette and flocked texture of Bullies, in particular, were inspired by his 1970s upbringing. Marti’s engagement with wallpaper, as well as with popular and mass imagery, places him in the lineage of transformative twentieth-century Pop artists, such as Andy Warhol (see his Cows in Cooper Hewitt’s collection) and Robert Indiana, who also looked to wallpaper as an outlet for their artistic practices.

← Recapping the view from inside - Pandemic as Portal: Exploring the in-between
Milton Glaser (1929–2020) →