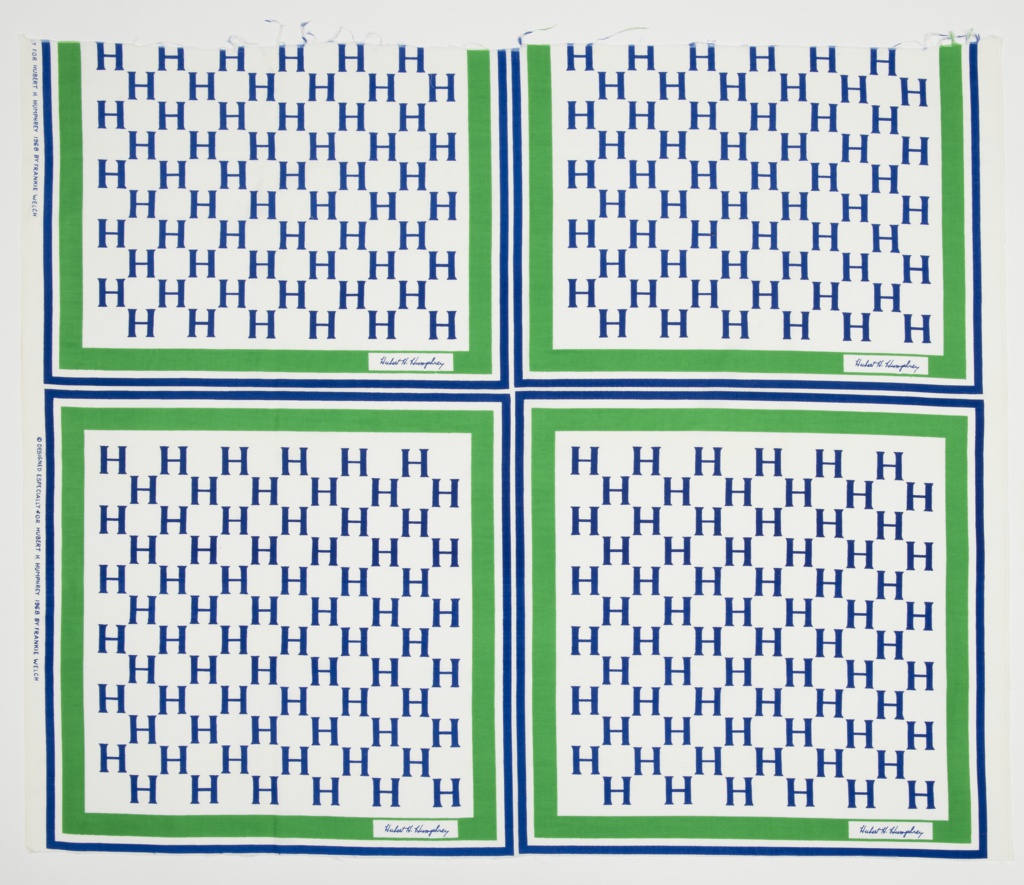 This Hubert H. Humphrey “signature scarf” fabric was designed for Humphrey’s 1968 presidential campaign by Frankie Welch (a.k.a. Mary Frances Barnett), a textile and fashion designer as well as personal shopper and boutique owner. When her husband’s new position at the CIA first brought the Welch family to Washington, DC area in the 1950s, Frankie taught home economics and began her first workshops on how to shop and develop a personal style. Her clients were mainly the wives of Washington-area politicians. In 1963, she opened a shop, Frankie Welch of Virginia. She stocked the store with clothing and accessories from her favorite designers as well as attractive, quality pieces without designer names. A signature item was the popular “Frankie” dress – a garment she designed in 1960 that had a simple silhouette in two lengths, and that could be worn eight different ways. Her own scarves became an important part of the store’s décor.

Welch first started designing scarves in 1967 after she was commissioned by the wife of then Secretary of State Dean Rusk to create something “truly American” that could be given as gifts by the State Department.[1] Using the Cherokee syllabary, a system for writing the Cherokee language, she created a scarf that referenced both Dean Rusk’s home state of Georgia and her own self-identified Cherokee heritage. It was a best seller, and she used printed yardage of the scarf fabric to create Frankie dresses and pants. Portions of the profits were given to a Cherokee education scholarship fund. Welch was non-partisan in her professional life and went on to design scarves and clothing for various Democratic and Republican events over the years. The Hubert Humphrey signature scarf was accompanied by a long green shift dress with a large blue “H” outlined with white rickrack trim. The Comanche activist and politician LaDonna Harris was photographed in this dress during the Humphrey campaign. First lady, Betty Ford wore a pale green Frankie Welch dress to two state dinners in 1975 and 1976 and selected that particular gown to represent her in the Smithsonian collection.

← Art into Life. A Life into Art.
How National Design Award Winners are Fighting the Pandemic →

One thought on “Signature Scarf”

Very interesting. The name is familiar from that era, but do appreciate your providing the background of Frankie Welch. Thank you so much for sharing your knowledge. Hugs, Margie