Art into Life. A Life into Art. 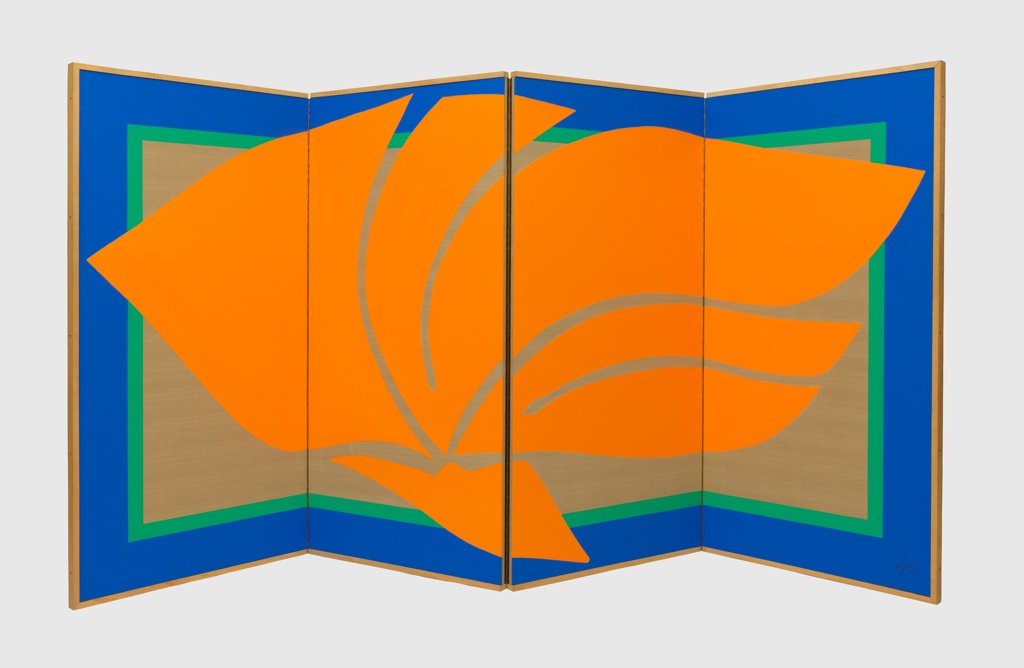 Flowing forms of bright orange spread upwards, flickering across the four panels of this folding screen. The work, Fire-Orange, is one of a series of folding screens the American artist Jack Youngerman made beginning in 1978. Fire-Orange exemplifies how Youngerman, who passed away on February 19th at the age of 93, thoughtfully and creatively explored the nature and boundaries of abstract art throughout the course of his career.

Youngerman developed an interest in art only after joining the United States Navy in 1944. While stationed outside Washington, D.C., he began taking drawing lessons. In 1947, he attended the École des Beaux-Arts in Paris on the G.I. Bill. There he befriended American expats enrolled at the school, like fellow painter Ellsworth Kelly. In Paris, Youngerman also had his first meaningful encounters with the work of modern artists such as Henri Matisse and Jean Arp—two figures whose work would have a lasting impact on the American’s oeuvre.[1] Absorbing the popular trends in art then circulating through post-war Paris, Youngerman started painting intricate compositions in a hard-edge, geometric style.

In 1956, at the urging of the influential art dealer, Betty Parsons, Youngerman returned to the United States and settled in New York. He found an apartment in Coenties Slip in lower Manhattan—a vibrant neighborhood inhabited by artists including Kelly, Robert Indiana, Agnes Martin, Robert Rauschenberg, Jasper Johns, and Barnett Newman. In New York, Youngerman blended his earlier hard-edge style with the impasto surfaces and massing forms of Abstract Expressionist painters Clifford Still and Robert Motherwell. His idiosyncratic approach to painting led to his inclusion in the important exhibition, Sixteen Americans, held at The Museum of Modern Art, New York in 1960.[2] Over the next decade and a half, Youngerman’s abstraction progressed away from the textured surfaces of his work of the 1950s, increasingly becoming more graphic and two-dimensional.

In 1977, Youngerman visited the exhibition, Masterpieces of Japanese Screen Painting, held at Pace Gallery. The artist had long held an interest in non-Western cultures, traveling to the Middle East during the 1950s when he lived in Paris. The screens he saw on display at the exhibition reinvigorated these longstanding interests and propelled his work in a new direction. Youngerman would go on to incorporate the format of the folding screen into his work the following year.

In Fire-Orange, Youngerman included allusions to the Japanese screens that had initially inspired his own exploration of the folding screen.[3] On the reverse of Fire-Orange, for example, Youngerman created a pattern of four identical, circular, calligraphic forms, which are mirrored in two pairs. The gestural forms evoke brush and ink techniques used in the screens on display at Pace Gallery. However, in their mechanical identicality and bright green color, they take on a pop sensibility of repetition and serial production. Meanwhile, Youngerman continued to incorporate references to Western modernism as well. On the front of the screen, the bright orange, flame-like forms he used recall shapes found in Matisse’s cutouts or Arp’s torn-paper collages from earlier in the century.

Importantly, the very nature of the screen format allowed Youngerman to take his painting into three dimensions. The artist had expressed his interest in thinking about a painting as an object a few years before beginning the series, noting “A painting is an object, and there is always the participation of the canvas to consider.”[4] Fire-Orange, and the other screens in this series, facilitated Youngerman’s leap into literalizing the painting as an object that occupies and can be encountered in the physical space of our environment. Following the screens, he began to make a number of sculptural works and painted wood reliefs. “I am not trying to capture anything,” Youngerman wrote, “but I am interested in the forms that living things take—the forms that come out of movement, that come out of heat expansion, that come out of growing things.”[5]

One thought on “Art into Life. A Life into Art.”