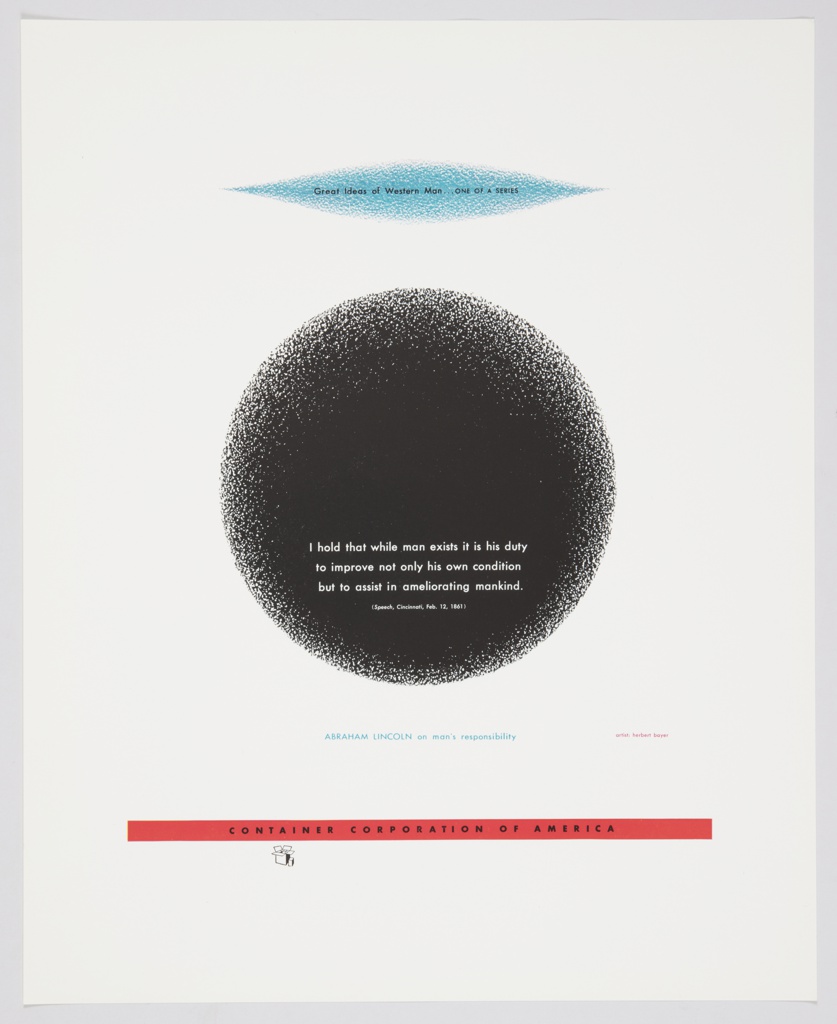 Herbert Bayer first became involved with Container Corporation of America (CCA) when Walter Paepcke, at the suggestion of his wife Elizabeth, began commissioning advertisements from avant-garde artists and designers, advocating for a collaborative relationship between art and industry. After completing several innovative advertisements, Bayer designed an exhibition for CCA in 1945 titled “Modern Art in Advertising,” which opened at the Art Institute of Chicago before traveling across the country.[1] Bayer went on to serve as a consultant to CCA and eventually became Chairman of the Department of Design (later renamed the Department of Visual Communication), where he had control over all visual aspects of the corporation.

Bayer became involved in CCA’s “Great Ideas of Western Man” series, after Walter and Elizabeth Paepcke began participating in a “Great Books” discussion group led by Robert M. Hutchins and Mortimer Adler, who worked with Encyclopedia Britannica on the publication of the monumental Great Books of the Western World series. The Paepckes came up with the idea of an advertising series based on quotes from classic “great books.” Adler was able to supply the quotes, centered around moral, philosophical, and political issues, from his Syntopicon, a detailed index of core ideas of the Western canon. A small committee led by Bayer, who had been selected as art director for the new series, then determined which artists would illustrate or interpret each quotation, with substantial creative license given. The varied interpretations featured the work of a range of artists and designers, including Paul Rand, Alvin Lustig, E. McKnight Kauffer, René Magritte, Joseph Cornell, Herbert Matter, Willem de Kooning, Ben Shahn, and Bayer himself.[2] Beginning in the 1950s, CCA’s “Great Ideas” campaign lasted 25 years, including more than 190 advertisements that reached the public through inclusion in popular periodicals and printed folios.

Cooper Hewitt’s current exhibition, Herbert Bayer: Bauhaus Master, features some of his designs for CCA, including three advertisements for the “Great Ideas” series. Ignoring the rules of conventional print advertising, the campaign replaces direct reference to the effectiveness of the product with an effort to project the personality or character of the corporation.[3] Recognizing that the products of CCA—including paperboard containers and folding cartons—are not particularly enthralling, Bayer instead sought to focus on conveying the corporation’s identity as humanistic, dynamic, and aspirational. This particular advertisement by Bayer promotes moral and cultural awareness, featuring a quote by Abraham Lincoln from an 1861 speech: “I hold that while man exists it is his duty to improve not only his own condition but to assist in ameliorating mankind.” The power of Lincoln’s words is amplified by the central black circle and thin, blue geometric form above, with their indistinct borders subtly suggesting a resistance to containment or egocentrism. Although the company name appears across a thin, red rectangular strip along the bottom, above a small company logo, Bayer transforms an advertisement for mundane, short-lived paper packaging into a compelling call for civic responsibility.

[1] See Gwen F. Chanzit, From Bauhaus to Aspen: Herbert Bayer and Modernist Design in America (Boulder: Johnson Books, 2005), 185–198 for an overview of Bayer’s work for CCA.

[2] Cooper Hewitt recently acquired many of these “Great Ideas” designs.

← Something Fishy for Your Walls
Vegetal Chair →

One thought on “Transcending Advertising”

Hello, I have a collection of 78 of the Great Ideas of Western Man in their original portfolios and box and am looking to sell them. Would Cooper Hewitt be interested? The collection is 78 color plates in 5 portfolios (1950-51, 1951-52, 1952-53, 1953-54, and 1956-57-58) contained in a box (Note that the box indicates just “fifty-two advertisements”). The box has some wear and corner damage. The portfolios show some wear from rubbing. All but three of the plates are in very good condition. Two have tape marks in the upper corners that can easily be concealed by a frame or mat. Another plate has minor roughness in the corners that can be similarly concealed. There also is a catalog from an exhibition of the collection, which eventually numbered more than 190 advertisements. Included also is a check used by the original owner to purchase at least part of the collection in 1957.