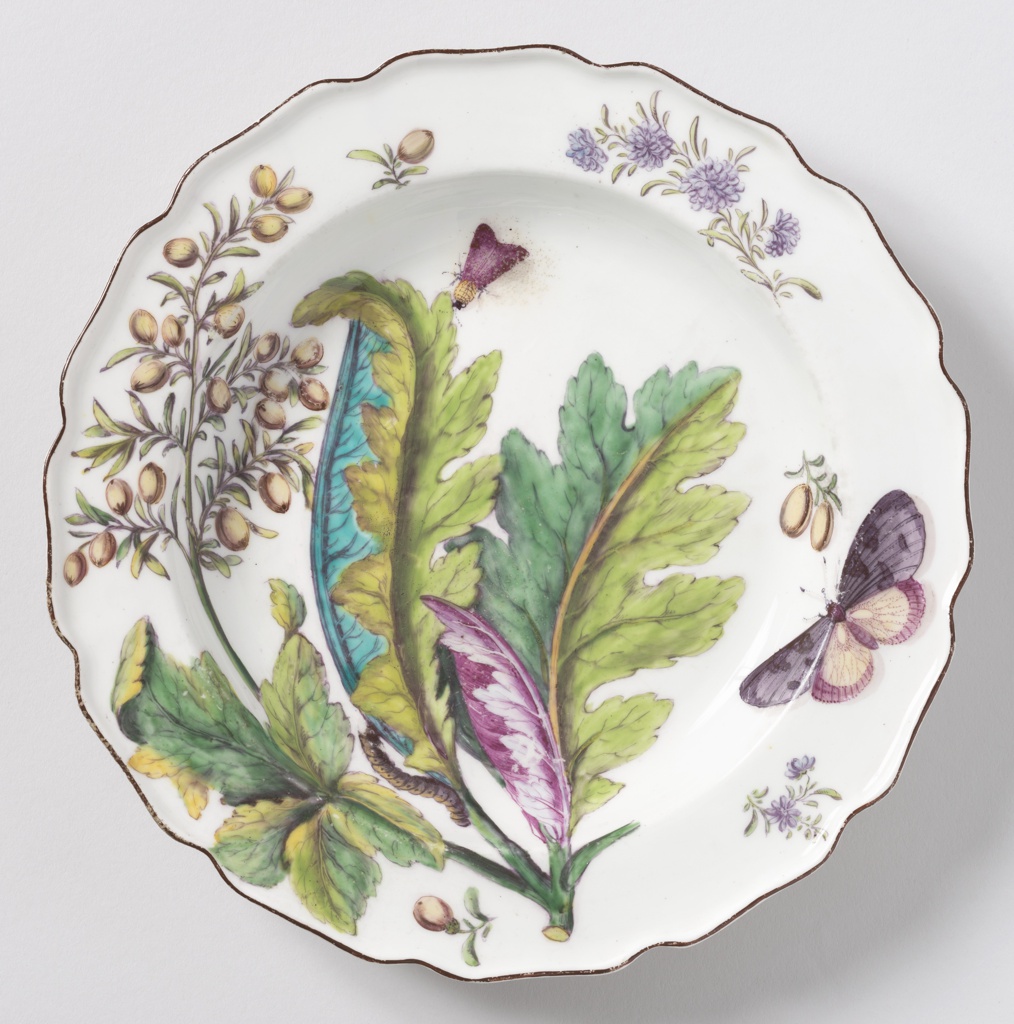 The creation of what has come to be known as Hans Sloane plates derived from an increased interest in natural history in the eighteenth century, which led to the establishment of many botanical gardens. Among these was the Chelsea Physic Garden, founded in Britain in 1673. In 1713, respected physician and naturalist, Sir Hans Sloane, became the Garden’s landlord and appointed Philip Miller to become its curator. Miller then published two books based on his work there: The Gardener’s and Florist’s Dictionary , and Figures of the Most Beautiful, Useful, and Uncommon Plants described in the Gardeners Dictionary, with drawings of over 300 specimens of plants – some of which served as inspiration for the Chelsea Porcelain Manufactory’s painters.

Charles Gouyn and Nicolas Sprimont had set up their porcelain manufactory in Chelsea in 1743 near the Physic Garden. Before the set of plates to which this example belongs, no porcelain factory had attempted to reproduce floral decoration on such a large scale. The plants featured are in fact so luscious that for a long time it was believed they were fantastical creations and not botanically accurate drawings, but it is now known that they stem from the work of many artists.

Miller’s book featured illustrators of the caliber of G. D. Ehret, who was celebrated for combining scientific accuracy with elegance and beauty. Some artistic freedom was nonetheless permitted to the factory’s painters, such as changing the color of flowers and foliage to make them stand out more or adding leaves for compositional balance. There is no apparent method to the selection of plants: some are ordinary and others exotic. There is also no relation to scale, and all plants are depicted within the space of the circular plate, in proportion, but not related to their actual size.

These wares became known as Hans Sloane plates because the Chelsea Porcelain Manufactory published an advertisement in 1758 in Faulkner’s Dublin Journal offering “Table Plates, Soup Plates, and Dessert Plates enameled from the Hans Sloane’s Plants.”[i] Even though he had already passed by the time the plates were made, Sloane’s name was likely used because he had owned the land of the Garden, and his fame might have prompted increased sales.

← The Geometry of Nature
Botanical Lessons →

5 thoughts on “Natural History for Dinner”

Do you mean “he had already*died* by the time the plates were made”?

Yes! passed *away* – thanks for spotting that.

“..botanically accurate drawings…stem from the work of many artists.” How were you able to limit yourself? so many opportunities for blossoming, and branching, and being rooted, etc. I couldn’t have resisted I am sure.

Chelsea Porcelain Manufactory: Hans Sloane’s Plants on table plates, soup plates and dessert plates… did they make cups or mugs?
Thank you for these posts.