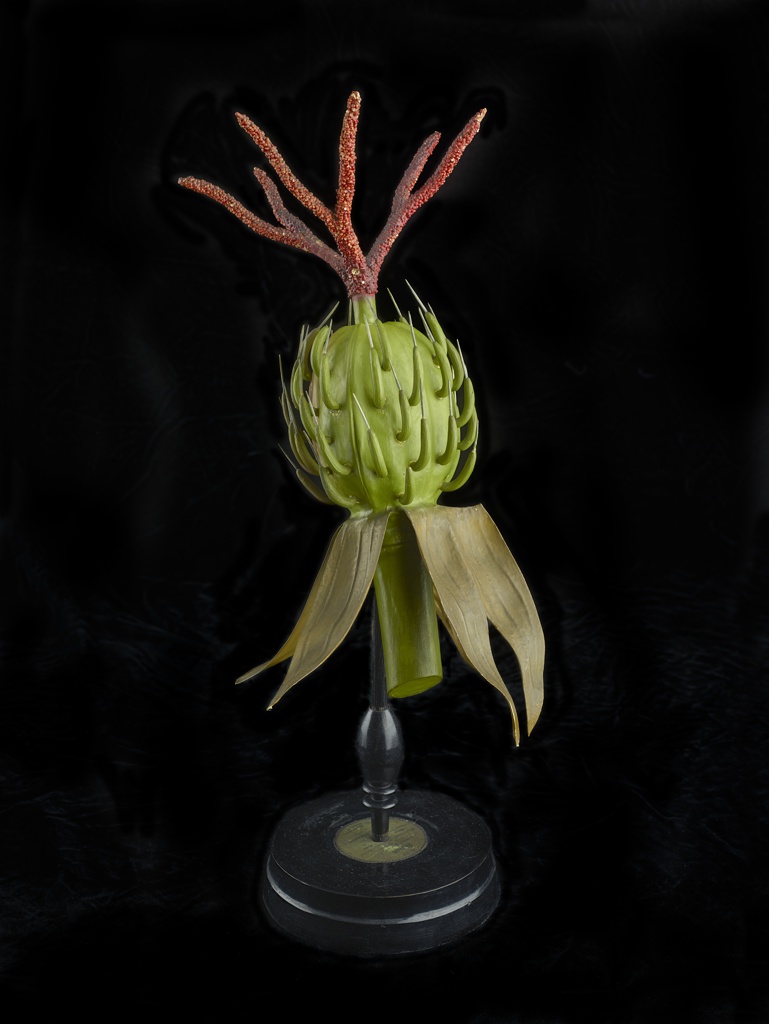 This Object of the Day post celebrates the opening of Nature by Design: Botanical Expressions, on view from December 7, 2019-January 10, 2021.

In the rapidly changing world of the nineteenth century, the expansion of industrialization was accompanied by an increased interest in science. Alongside major discoveries such as Darwin’s theory of evolution, Mendeleev’s periodic table, or Edison’s lightbulb, the development of education for a broader part of the population brought numerous technical advancements to everyday life.

This botanical model of a castor bean or castor-oil plant is one among the 300 species that the firm R. Brendel & Co. would have available in their catalog for the teaching of science at the turn of the twentieth century. Carl Robert Brendel founded his company in Breslau (now Wroclaw, Poland) in 1866, taking over the business of a pharmacist. As the venture grew, Brendel moved the factory to Berlin in 1875, where this model was made between that year and 1898. At that point, Brendel’s son Reinhold took over the company and moved production to Grunewald, Germany.

Brendel’s models were larger than the actual size of the plants to make precise details visible to the naked eye. The models were sold around the world, purchased by various museums and educational institutions in Europe and the United States. They were made in a wide range of materials that were affordable to produce and sell on a large scale, and were very durable, lasting generations of students.

Ricinus communis, as the castor bean plant is scientifically known, has had many pharmaceutical and industrial uses throughout history, which explains the company’s interest in making its model. In the early years of the twentieth century, the plant’s oil was used to make artificial leather and rubber, and would later be widely employed to lubricate the rotary engines of airplanes flown by the Allies during World War I.[i]

For almost one hundred years, R. Brendel & Co. provided a better understanding of the natural world, when microscopes and image projection were not yet widely available. By the time Reinhold passed away in 1927, the company had started going through difficulties, and production was permanently discontinued after World War II in a world where new micro-imaging technologies were becoming more available to educators at all levels.

This object is on view in the exhibition Nature by Design: Botanical Lessons.

One thought on “Botanical Lessons”