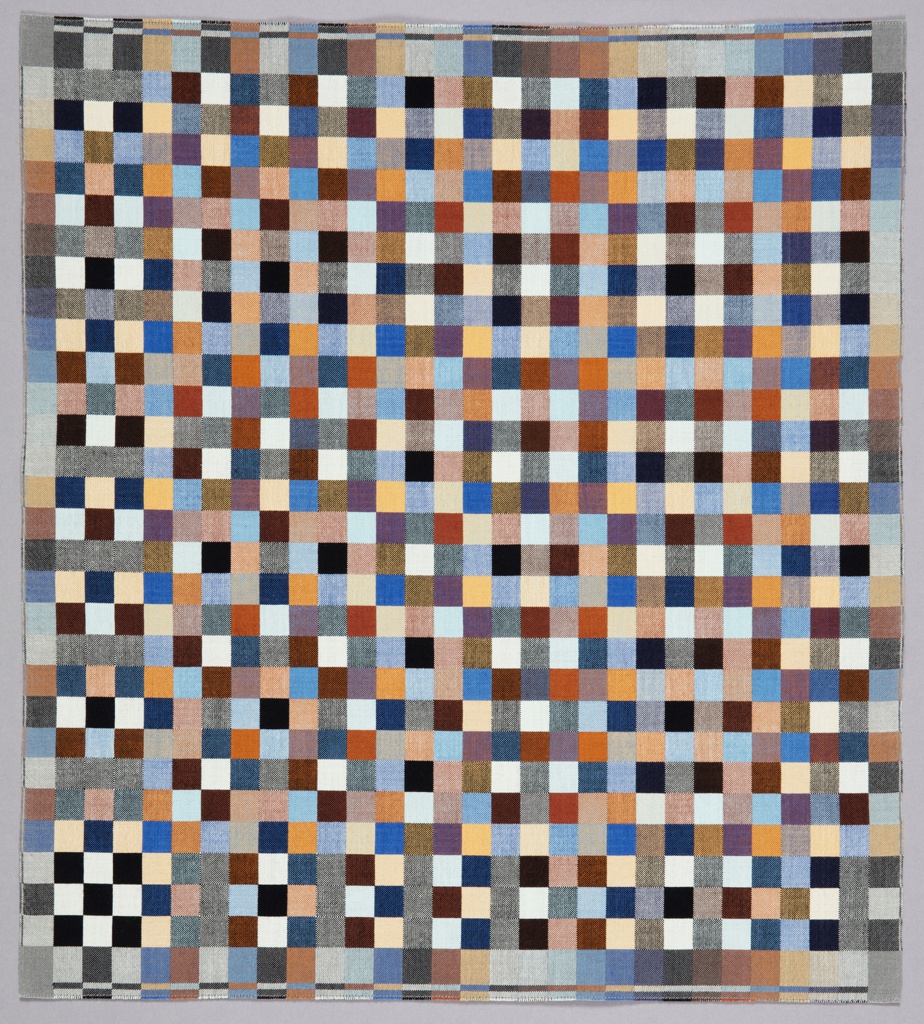 Posted by Maleyne Syracuse on November 11, 2019

American weaver Richard Landis’s works are characterized by complex design systems that echo the logic of their construction with a limited vocabulary of materials, texture, geometric forms, and colors. From his earliest days at the loom, Landis decided he would work only in plain weave and within the opportunities offered by handwoven, loom-controlled design. He taught himself doubleweave to expand what could be achieved within his self-imposed boundaries.

Nucleus (1976) is a superb example of Landis’s technically and aesthetically disciplined handwoven double-cloth. It is a diminutive piece, only eighteen and three-quarters inches high by seventeen inches wide, woven in very fine cotton thread. Designed in collaboration with graphic artist Craig Fuller, it uses a visual program based on a grid of small squares, thirty across by thirty down.

It is woven in a classic “checkerboard” style of loom-controlled block double-cloth. Rather than using only two colors as in a traditional checkerboard, Landis uses a modulated palette of colors, inspired by the subtle tones of the desert landscape surrounding his Arizona home: black, white, grays plus several shades of blue and of its compliment, orange – twelve different colored threads in total.

Landis’s program allows for a balanced and systematic depiction of all seventy-eight possible tones and half tones that may be constructed from the twelve different color threads. The use of very fine, smooth threads woven in plain weave allows for the appearance of definite tonalities and the rendering of a perfectly flat colored surface. “…For while my medium is weaving, my formal concerns are those of a painter. The firm tabby surfaces I weave form a canvas,” Landis said. “In my work, the canvas is the painting.”[1]

In Nucleus the colored warps and wefts are precisely arranged, with a subtle symmetry. The warp threads in column one are the same colors as the weft threads in row one; the warps in column two are the same as the wefts in row two and so on across the weaving. Landis then alternates the warp and the weft respectively that appear in each square, in the same sequence, across the full width and height of the textile. Thus what might appear as a random arrangement of colored squares in the grid is in fact deliberate. As a result, the first row and the first column of squares as seen from each respective corner of the composition have the same color tones, similarly for the second row and second column, and so on, except that the warp and weft colors are reversed. So, for example, the fifth square in the first row is a half tone of blue warp and gray weft and the fifth square in the first column is a half tone of gray warp and blue weft. The diagonals are full tones. The resulting juxtaposition of different tonalities, as well as the changing orientation of the threads multiplies the color relationships, allowing for what Landis called “reiteration without repetition.”[2] Thus, even with its flat, uniform surface and repeated color sequences, Nucleus is a lively and energetic composition.

Richard Landis stopped weaving in 1995, but his disciplined geometry and masterful use of color are fresh and fascinating today.

Maleyne M. Syracuse is an avocational weaver and an independent art historian specializing in textiles and fine craft. She is President of the Board of Directors of Peters Valley School of Craft in Layton, NJ and a past Treasurer of the Textile Society of America.