From Painting to Print 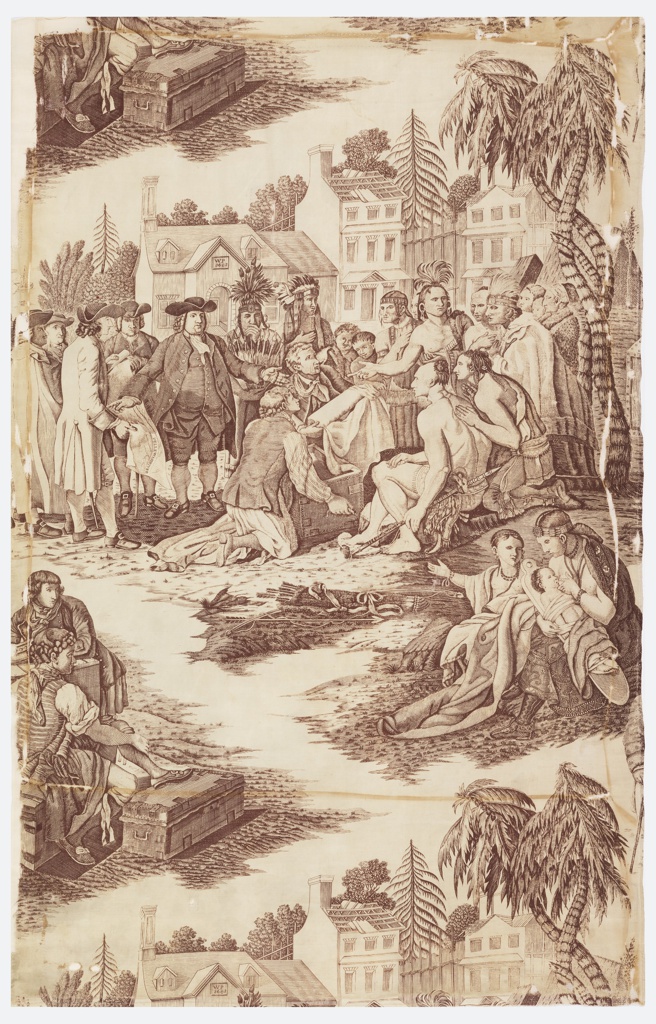 The founding of Pennsylvania and the formation of William Penn’s “greene country towne” of Philadelphia is immortalized in this textile, intended for use as a furnishing fabric. Whereas today Penn’s dealings might be seen as part of a larger narrative of harmful and exploitative colonization, the printed images seek to convey Penn as a forward-thinking builder of the New World. The work also demonstrates how imagery was disseminated through popular visual culture within the eighteenth-century. The source material for this copperplate printed image was the painting Penn’s Treaty with the Indians, completed by Benjamin West between 1771 and 1772 and now in the collection of the Pennsylvania Academy of the Fine Arts; the Cooper Hewitt collections holds a preparatory drawing for the final painting (1915-13-1).

Commissioned by Penn’s son Thomas, the work is a fictional fabrication, drawing on a glorified version of history rather than reality in order to cement the legacy of Penn in history. Conflicting dates place the historical event between 1682 or 1683, supposedly taking place underneath a tree in Shackamaxon, which is in the present-day Fishtown area of Philadelphia. Meeting with the Lenni Lenape leader Tamanend, the aim of the gathering was to negotiate a treaty securing peaceful relations between the settlers of the newly-founded area of Pennsylvania and the Lenni Lenape. In the painting and subsequent print replications, these two figures are surrounded by other Quaker settlers, merchants, and Native Americans, with depictions of a growing city settlement in the background. West faced multiple challenges in crafting this image, seeking to fulfill the request of Thomas Penn to cement his father’s legacy in history while also suffering from a lack of visual resources from which to draw, and instead utilizing idealized images and artistic license.[1] The West painting proved to be popular in American and British culture through its dissemination in the form of prints, textiles, and goods for household interiors. Its translation into a print naturally facilitated the production of copperplate print textiles like this example. There is definite evidence that this type of printed imagery was used to decorate an interior as it is recorded that a full set was listed in the contents of Solitude, the Penn family house in Philadelphia. A 1788 household inventory describes “1 set of hair colour furniture cotton bed curtains, pattern William Penn’s Treaty with the Indians; 3 window curtains to match.”[2] Whether in the original West painting or in other visual iterations, the image contained symbolic power for the Penn family. Other surviving examples of this textile print display varying details, most noticeable in the inclusion of natural imagery and background structures. This reinterpretation of the original work continued well into the nineteenth-century, as evident in a “William Penn Treaty plate” in the Cooper Hewitt collection (2001-25-9). While a seemingly ordinary print, this textile speaks to the power of print media in the eighteenth-century and its complex economic, political, and cross-cultural connections. Virginia Pollock is a Curatorial Fellow in the Textiles department at Cooper Hewitt, Smithsonian Design Museum, and a second-year graduate student in the History of Design and Curatorial Studies program offered jointly by Cooper Hewitt and Parsons School of Design.