Camera in a Box 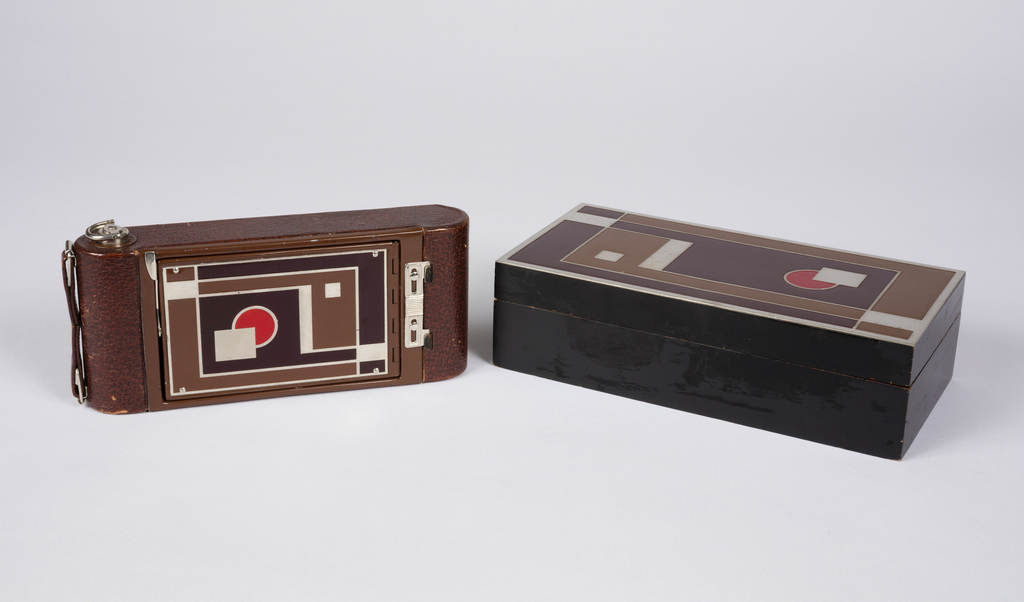 Walter Dorwin Teague was a well-established industrial designer by 1928, when the Eastman Kodak Company, engaged him to modernize their line of cameras. Kodak sought Teague based on recommendations by curators from the Metropolitan Museum of Art. Having no prior experience in camera design, Teague undertook the assignment after Kodak agreed that he could spend one week each month at their facilities in Rochester, New York to work closely with Kodak’s engineers and learn all he could about cameras and their manufacture. Teague started by redesigning carrying cases for existing lines of cameras, and within two years he went on to design a range of modern-styled cameras for the growing amateur market, including the Beau Brownie box-type camera and the 1A Gift Kodak.

Based on Kodak’s plain looking 1A pocket camera, a folding model with a bellows and lens that could fit in a coat pocket when collapsed, the 1A Gift Kodak used the company’s number 116 roll film that produced 2 1/4 x 4 1/2 inch prints. Kodak produced its gift cameras in limited runs of 10,000, and the 1A Gift Kodak was a special version created expressly for the holiday gift-giving season. Introduced in 1930, along with the Coquette Package comprising a small chrome and blue-enameled camera with matching compact and lipstick case aimed at the feminine market, the larger 1A Gift Kodak looked decidedly more masculine. The rectangular camera housing is covered in brown leatherette, and the front panel over the folding bellows is decorated in a bold rectilinear geometric pattern in chromed metal, tan and brown, punctuated by a red circle-with-overlapping chrome square, almost dead center. The chromed metal and earth-toned geometric decoration carries through to the circular lens ring, visible when the camera is unfolded and ready for use, offering a visual counterpoint to the tapering squares of the bellows behind it. The 1A Gift Kodak came in an elegant ebonized cedar box, about the size of a tabletop cigarette box, the lid covered with a chromed and enameled metal panel that repeated the geometric design on the camera’s face. Teague’s rational geometric shapes referenced modernist trends in art as well as the mechanical, industrial nature of the camera itself. At a cost of $15, the 1A Gift Kodak was affordable to consumers of the time and would have indicated the sophistication and modernity of both the giver and recipient.