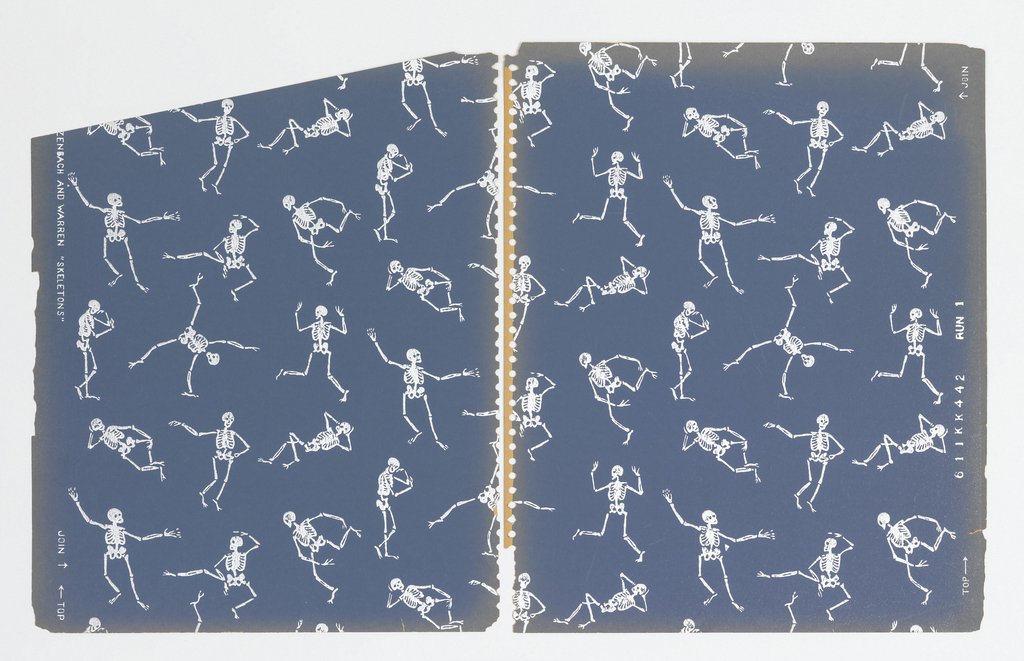 Posted by Gregory Herringshaw on October 30, 2019

Perfect for the Halloween season is this wallpaper aptly titled “Skeletons”. The pattern is composed of skeletons each assuming a different wacky pose. There are nine different poses in total, forming a neat grid, but the designer’s skill in placing the motifs creates a nice overall flow which appears to contain an unlimited variety of stances. Each of the skeletons is actively trying to engage the viewer: one skeleton is standing with outstretched arms, apparently welcoming the viewer to his lair. Another seems to be performing a squatting dance move. A third is showing his acrobatic skills by performing a cartwheel. That is, except for two that can be found in more recumbent poses, perhaps being entertained by the antics of the other seven.

William Justema was a creative person working his craft in a variety of fields. He was a fine art painter, he designed wallpapers, textiles, and rugs, he designed and executed large-scale mosaics for public places. Justema was also a poet, and the author of several books on design and taught design at centers across the country. He designed his first wallpaper for the New York firm Katzenbach & Warren in 1937 and continued designing for this firm and others through most of the 1960s. His designs were fresh, frequently bold and brightly colored, and as seen in Skeletons, sometimes whimsical.

← From Painting to Print
Celebrating The Day of the Dead →