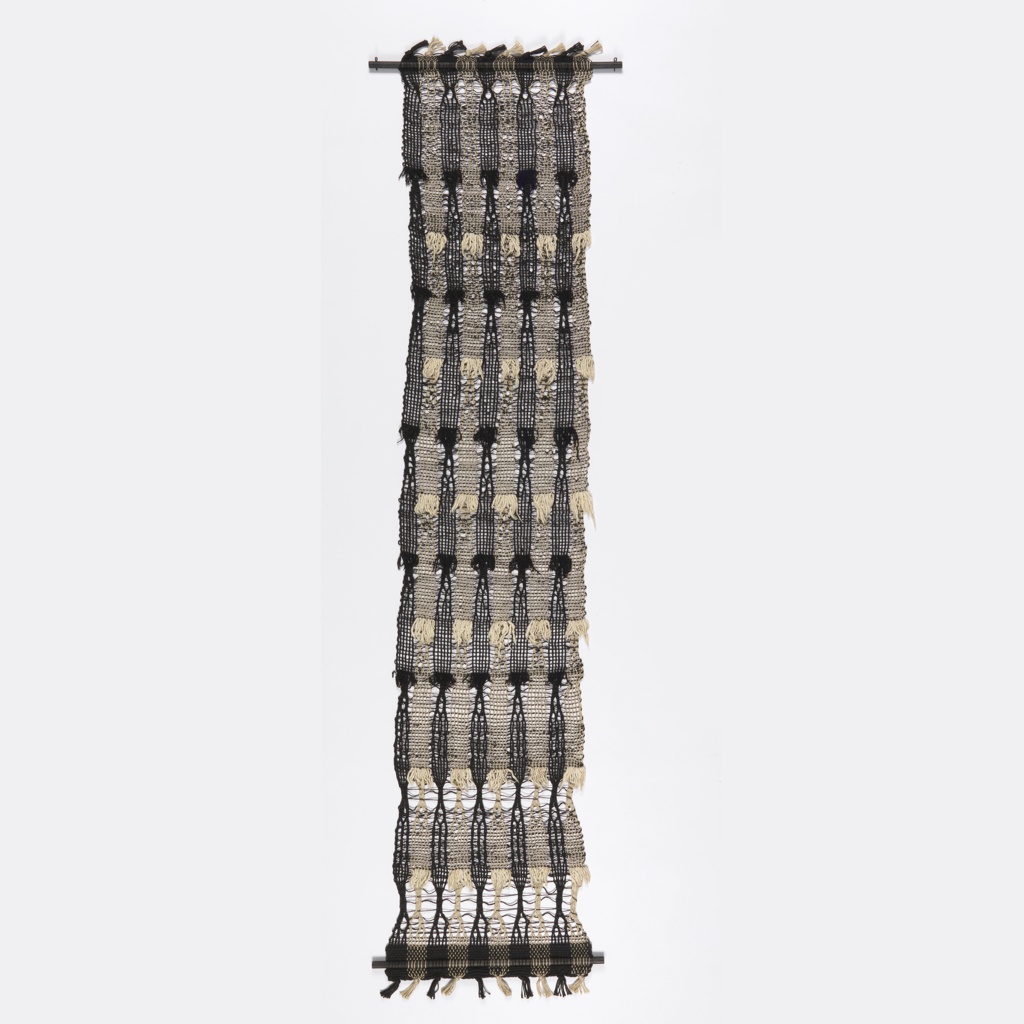 Posted by Kimberly Randall on September 25, 2019

Lenore Tawney (1907-2001) was an American artist whose experimental “woven forms” redefined the context for traditional textiles within the art world. Lenore Tawney focused exclusively on weaving in the 1950’s, first creating traditional woven wall hangings and then experimenting with open structures, irregular shapes, and varying textures and materials. In the 1960’s, she moved to Manhattan and her work transitioned into large-scale sculptural forms. Although still created in a traditional woven format, the work became more open and textural, utilizing light as an important compositional element when hung in space, casting shadows on the walls and floor. Her works reflected her interests in the spiritual, as well as the philosophical beliefs of eastern, southeastern, and indigenous American cultures.[2]

Hanging, Seed was created in 1961 during Lenore Tawney’s sculptural weaving period. The fibers — natural and black linen, wild cotton, and handspun wool — are woven in a relatively open sett and with a very loose plain weave structure. Additionally, tufts of natural and black yarn alternate along the length of the weaving. Throughout the piece, the technique of leno weave accentuates the varying thickness and textures of yarns. Leno weave is a weaver-controlled process where two or more warp threads are twisted around the weft threads, resulting in a very open yet structurally durable fabric. These open and condensed areas are emphasized as the piece hangs from ceiling to floor, allowing light to become an integral part of the installation.

Through her travels, Lenore Tawney was influenced by spiritual and cultural beliefs of different regions, and these were manifested in her art. In some cultures, and specifically southeast Asian culture, cloth is seen as sacred and weaving as a spiritual ritual. The warp is representative of the pre-ordained, unchangeable part of life, the spiritual. The weft is considered the earthly component, the unpredictable, synonymous with human free-will. This philosophy seems to align perfectly with Hanging, Seed, by Lenore Tawney. The sheer size of this piece denotes a time-line or path, a journey from one state of existence to another. The woven structure creates undulating waves along the length, adding to this sense of movement or passage. At first glance, the weaving looks fragile with its open, gauzy effect, but this same structure makes it strong and durable, a reflection on life’s circumstances and the human spirit.

Robin Haller is an artist who specializes in digital design and weaving. She is Associate Professor and Area Coordinator of the Textile Design Program at East Carolina University.

[2] Liz Sonneborn, “Lenore Tawney,” in Sonneborn and Carol Kortz, eds., A to Z of American Women in the Visual Arts (Infibase Publishing, 2002).