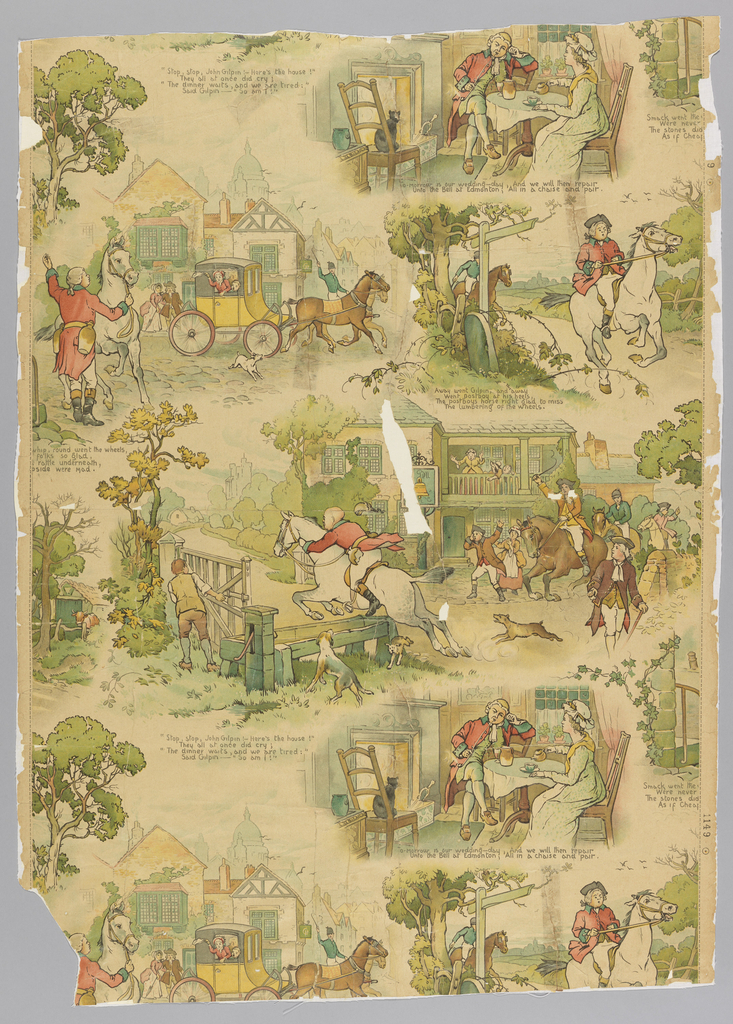 Early children’s wallpapers were designed to be educational, with many based on popular books. This wallpaper illustrates four scenes from William Cowper’s poem The Diverting History of John Gilpin written in the 1780s. The story contains some silly antics that would capture the fancy of children. The nutshell version of the tale goes like this: Gilpin is a London merchant whose wife mentions at dinner one night that they have never had a vacation. She has made plans to stay in a nearby town and has invited her sister and niece, and her own three children, to accompany them. Their party of six will fill the carriage so John must borrow a horse and ride along on his own. This is where the fun starts. Shortly after Gilpin sets out, the horse breaks into a mad gallop with Gilpin holding on for dear life. His hat soon flies off, followed shortly by his wig. The wind pops a few buttons and his jacket blows away, while two wine jugs strapped to his belt smash together and shatter, turning the horse’s legs red. Gilpin arrives at the house where the family is waiting on the balcony, all waving and yelling for him to stop. But the horse refuses to listen and continues to his owner’s house ten miles down the road. There, the horse finally stops but is soon frightened by a braying mule and turns around and heads back to London. For all his trouble, John Gilpin misses the holiday with his family.

This is a sanitary wallpaper, meaning it is machine-printed with engraved rollers using oil pigments. Many early children’s papers were printed in this technique, which could be wiped clean if soiled. This printing process was first applied to wallpapers in England in the 1870s, though it wasn’t until 1884 that designs could be printed in multiple colors. The wallpaper is delightfully illustrated though the artist is unknown.

Greg Herringshaw is the Assistant Curator of Wallcoverings.

Is this wallpaper available for purchase? John Gilpin’s diverting ride.