A Canticle of Pan 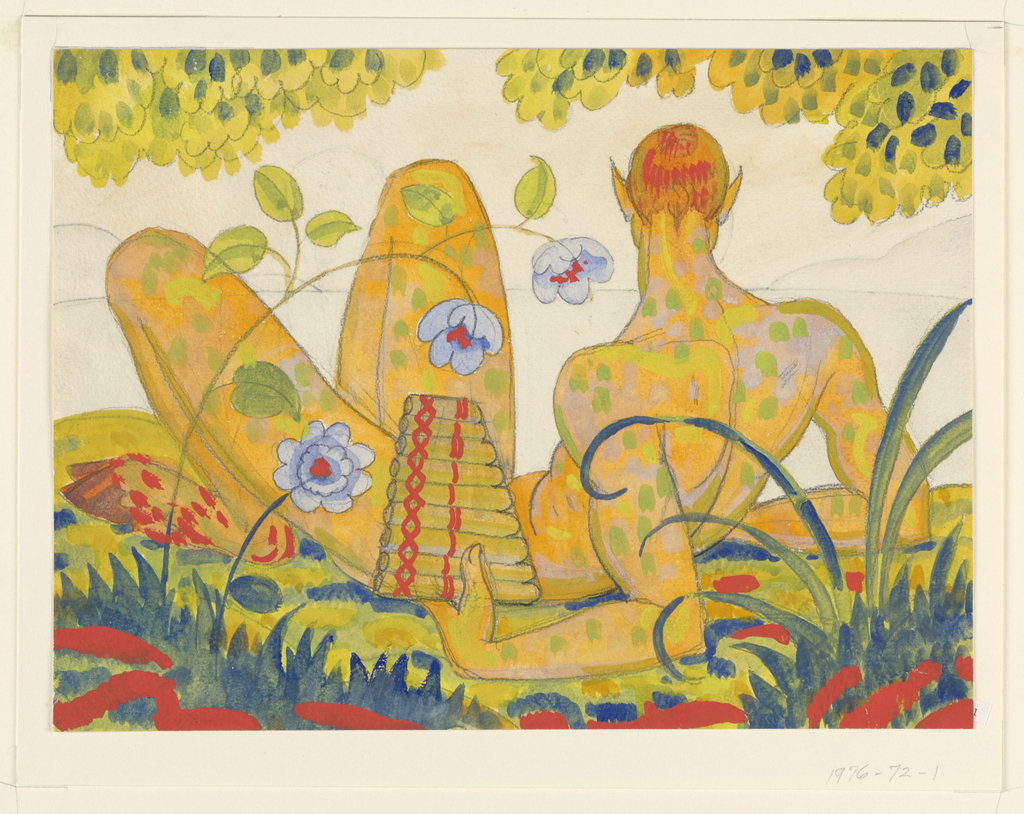 In celebration of World Pride, June Object of the Day posts highlight LGBTQ+ designers and designs in the collection.

In a 1916 profile published in Vanity Fair, Paul Thévenaz was described as a painter and a dancer. The article also identified the Swiss-born double threat as the cult leader of a movement called Rhythmician, an ensemble of artists interested in the intersection of art and dance: “The Rhythmicians believe that there is a necessary relation between music, or rather dance music, and sculpture and painting, and that all are very necessary to each other.”[1] While Rhythmician may not have slid into the vocabulary of art and design history textbooks alongside terms like fauvism, modernism, cubism, or art deco, it possesses many of the characteristics that define those styles. Aggressive color palettes, refined but expressive shapes, multi-faceted realities, dynamic compositions—many of these are embodied in this drawing of a faun relaxing in a verdant patch of grass. In his artistic practice, Thévenaz produced dynamic portraits as well as fantastical murals for interiors. Many radiate a rhythmic, dancelike levity that demonstrate Thévenaz’s preoccupation with art and movement.

Through his work, Thévenaz proposed a blissfully unprejudiced utopia, collapsing time and space: “Anachronism and exotism [sic] ought to be conquered; then there would be no more anachronisms and exotisms, because by destroying time and space in reality, we should arrive at such a practical and simple way of dealing with all the works of the dead and the foreign that there would not be any more uneasiness or self-consciousness.”[2] In this vein of condensing references, much of his work explores mythology as well as global cultures in stylized, unifying ways.

In this drawing, there is perhaps a strong sexual energy apparent, but mannerist expressions of sexuality are continual subjects in his work, particularly in his treatments of mythological figures. And the half-man-half-goat god Pan is typically associated with virility and youth. The drawing may have been inspired by poet Witter Bynner’s 1920 book of poems A Canticle of Pan, as the drawing dates to around the year of publication, and the two men were then in a long-distance relationship; Bynner was in California teaching at the University of California, Berkeley and Thévenaz working in New York as an artist.[3] The opening verses of the Canticle state: “Where a golden youth was singing, holding high his lyre.”[4] Rather than a lyre, the drawing depicts a pan flute, a typical attribute of Pan, and an object that provides more coverage.

Thévenaz died young, at the age of thirty. Shortly after his death, heiress Alice De Lamar published a catalogue of his work, containing dozens of portraits, murals, and sketches, and including an essay by Thévenaz from which much of his artistic perspective can be gleaned (the catalogue is available in full on archive.org). Like much of history, the catalogue does not mention Rhythmician (or cults), but it does burst with vibrancy, optimism, and harmony.

[2] Paul Thévenaz: A Record of His Life and Art Together with an Essay on Style by the Artist (Printed privately, 1922), 25

One thought on “A Canticle of Pan”

The term “heiress” for Alice De Lamar is inexcusably sexist. Would you describe a man who inherited a bunch of money as simply an “heir,” or would you use some word like “magnate” or “playboy” or “philanthropist” to define his role? Maybe you could call her a “wealthy art enthusiast” instead, if you know nothing about her except that she inherited money and liked art.