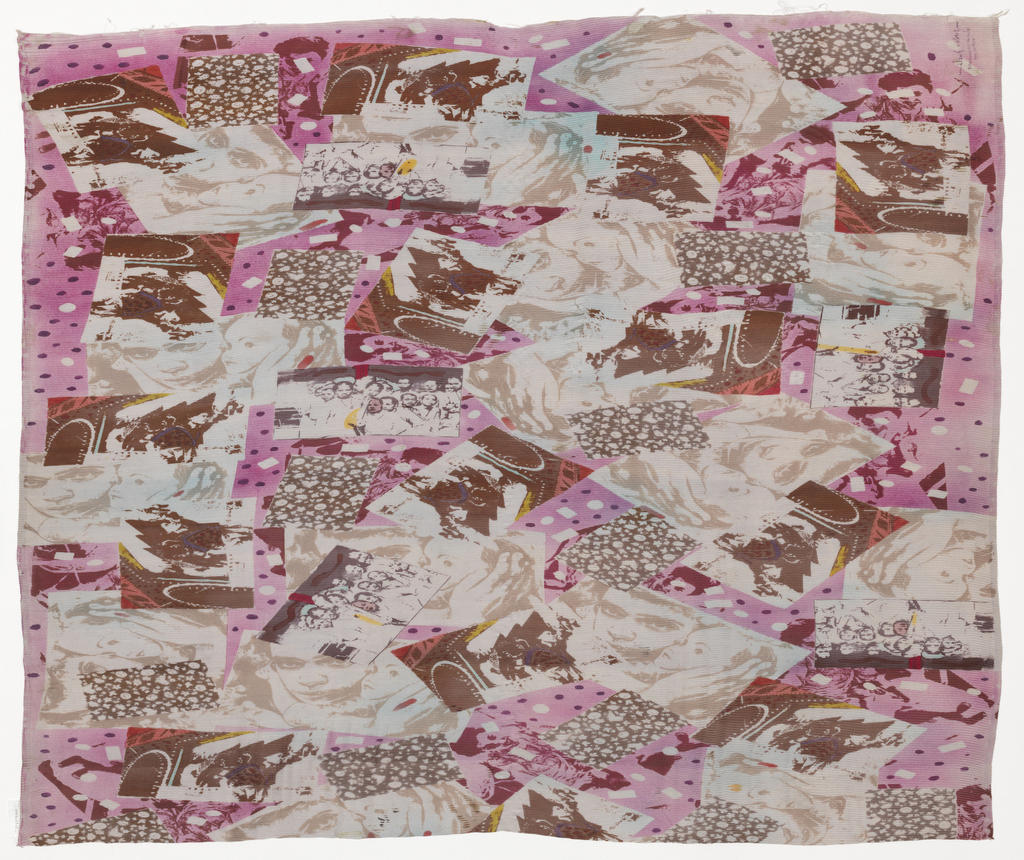 Clark Robertson moved to New York City, from Texas, in the late 1970s to establish a design and printing business, at which he started producing printed textiles for fashion and interior design use. A design titled Pearl (in Cooper Hewitt’s collection) is thought to be his first effort at printing textiles in New York.[1] The design consists of a cascading pattern of architectural enclosures in bright colors, each containing a motif such as Michelangelo’s statue of David, a Chippendale chair, and a photograph of Robertson’s mother, named Pearl. Robertson frequently incorporated human figures into the pattern of his textile designs,[2] and demonstrated a continued interest in the human form and the manipulation of its presentation throughout his work.

A collaboration with photographer Inger McCabe Elliott offered new visibility to Robertson’s textile designs. In 1981 he produced a line titled PhotoSilk for Elliott’s textile company China Seas, Inc. The designs were displayed at the company’s showroom on 58th Street in New York, presented as panels, scarves, and upholstery fabrics.[3] In these textiles, he silkscreened photographs Elliott had taken while in Cambodia and other parts of Asia on assignment for Time-Life.[4] According to Elliott, “Clark Robertson was an artist of breathtaking insight. When we developed PhotoSilks—photographs on fabric—I never stopped wondering at his boldness and strong imagery.”[5] Though the color palettes tend to be vibrant and the compositions lively, the photographic elements of Robertson’s designs can be both whimsical and disturbing in their voyeurism. The stylized coloring of the photographs decontextualizes the photographic subject, allowing the figures to be reframed in a postmodern aesthetic while not stripping the subjects of their humanity. Through these works and other patterns designs, Robertson aimed to contemplate the visual effects of suffering.[6]

Robertson’s later work shifted to textile art as a more conventional artistic practice, rather than as use in fashion or interiors. In the late 1980s, he painted on linen canvases and often explored facial reconstructive surgery performed on World War I veterans as his subject.[7] Many of Robertson’s textiles in Cooper Hewitt’s collection were donated by poet Maurice Tourigny, Robertson’s partner, after the designer’s death from AIDS-related complications in 1991.