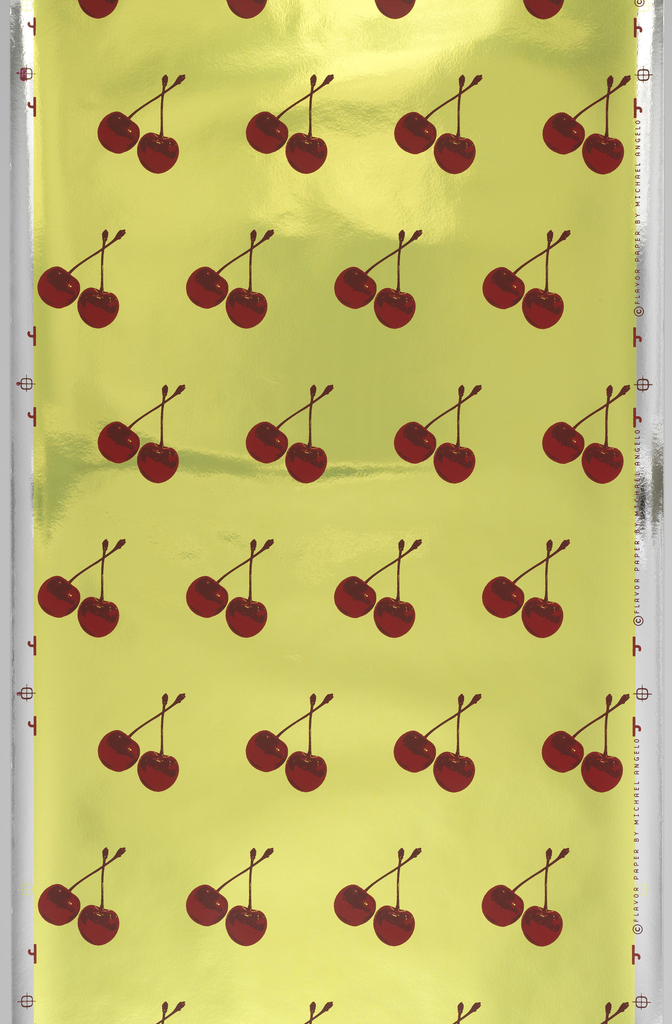 Posted by Gregory Herringshaw on June 6, 2019

This is one of my favorite novelty papers as it appeals to a number of senses and is more than just a pretty wallpaper. I find myself drawn to the complementary colors, with the bright red cherries on the green Mylar foil ground. It just screams fun and has so much energy. Designed by Michael Angelo and produced by Flavor Paper, Cherry Forever is the first commercially produced scratch and sniff wallpaper, so it also appeals to one’s sense of smell. The paper is quite fragrant on its own but to release a burst of scent you can scratch across any of the printed cherries. To produce this olfactory sensation the scratch and sniff wallpapers are screen-printed using micro-encapsulated scented oils. Flavor Paper employs the technique developed by 3M in the 1960s to produce carbonless paper, first used to encapsulate scented oils in 1965. Similar uses appear in magazine ads for perfumes and colognes, where, instead of scratching, you unfold the flap to break the cells.

The scratch and sniff wallpapers were initially available in three flavors including Cherry Forever, B-A-N-A-N-A-S!, and Tutti Frutti. While the studio was operating in their original New Orleans location, a portion of the proceeds from the Fruit Cocktail collection were donated to the Human Rights Campaign, the nation’s largest LGBTQ civil rights organization. If you’re not sure you want to live with the fruity scent they are also available unscented. Michael Angelo, along with being a hairstylist, makeup artist, and founder of Wonderland Beauty Parlor in West Chelsea, New York City, is also a photographer, film maker, and designer. Upon the release of “The Fruit Cocktail” collection of scratch and sniff wallpapers in 2007, Wonderland was papered with the scented designs. Flavor Paper is a Brooklyn-based company that produces both screen-printed and digitally-printed wallpaper. Incidentally, they just launched a Tom of Finland collaboration.

Greg Herringshaw is the Assistant Curator for Wallcoverings