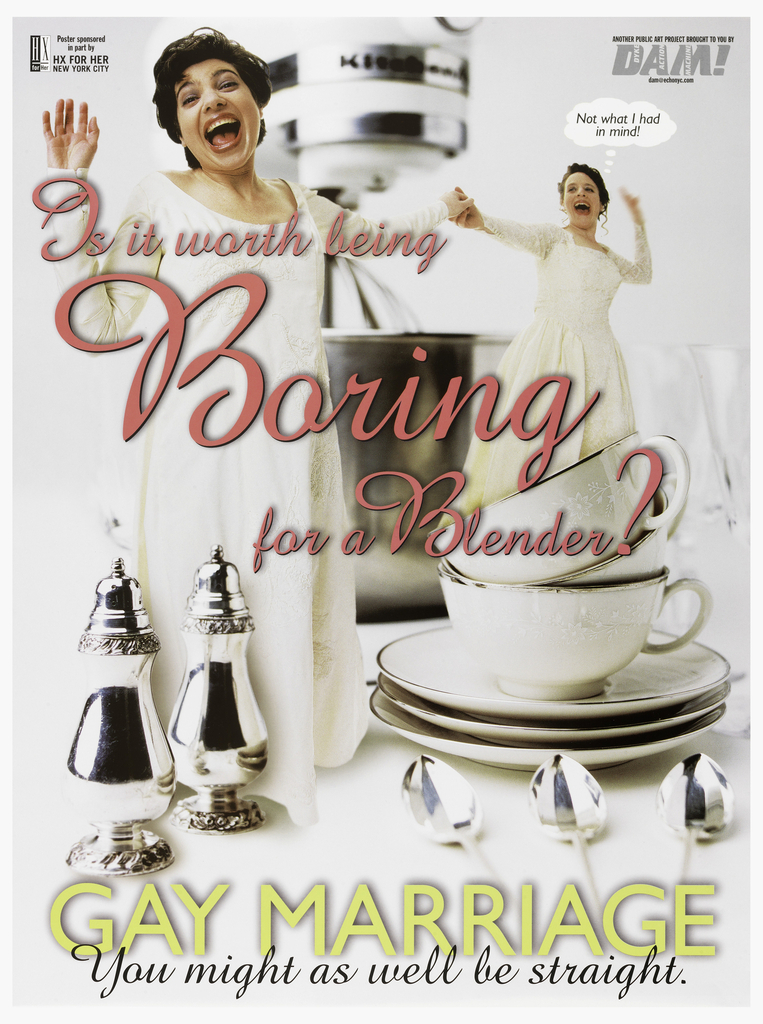 In celebration of World Pride, June Object of the Day posts highlight LGBTQ+ designers and design in the collection. This post originally appeared on March 30, 2015.

This provocative poster was designed in 1997, one year after the US Congress passed the Defense of Marriage Act. Known simply as “DOMA,” the Act barred same-sex married couples from being recognized by federal law. The poster is the work of Dyke Action Machine!, a New York activist duo consisting of photographer Sue Schaffner and painter/graphic designer Carrie Moyer. Dyke Action Machine! created a number of culture-jamming posters like this one (a few of which are in the Cooper Hewitt collection).

Dyke Action Machine! was born out of the radical, anti-assimilationist milieu that reclaimed the word “queer” in late 80s/early 90s New York.[1] The collaboration began as an offshoot of the activist organization Queer Nation and later evolved into a stand-alone agitprop duo.[2] Dyke Action Machine!’s posters, pamphlets, and other works appropriated the visual language of corporate advertising to expose, parody, and question conspicuous consumption and mass conformity.

While mainstream gay rights orgs like HRC (Human Rights Campaign) are concerned with challenging the definition of marriage as a covenant between a man and a woman, Dyke Action Machine! aimed to protest the practice of marriage in general. Using imagery of a blender and other housewares as symbols of consumerism, the poster expresses discontent with the complacency of traditional marriage (“being boring”). The poster implies that marriage is less a covenant between two individuals than it is a stultifying union between a given couple and a web of oppressive social norms. Spread from a satirical “shareholders report” by Dyke Action Machine!, in which they pretend to have “restructured” and re-branded themselves as “DAM, Inc.”

With its pert, subversive tactics, Dyke Action Machine! is a predecessor to a handful of newer collectives whose work critiques corporate culture by emulating its forms (the PDF, the brochure, the shareholders’ report, etc).

For example, K-Hole is an increasingly well-known group of eclectic creatives who produce and freely distribute “trend forecasts,” like an elite brand strategist unhinged from any client. Their slick PDF reports coolly expound ridiculous-sounding concepts like “Illegible Chaos,” “fragmoretation,” and Normcore as they relate to seemingly inexplicable fads, like wedge sneakers.

Metahaven is a group of Dutch designers whose work also emulates the output and accoutrements of big brands. Metahaven’s parodic installation “FaceState” warned of a Fahrenheit 451-like surveillance state in which a fictional social network actually displaces government. This dystopic shift is enabled, of course, by chipper consent from a camera-toting citizenry to ever-encroaching Terms & Conditions. (FaceState was exhibited in Graphic Design—Now in Production, a survey of graphic design co-produced by Cooper Hewitt and the Walker Art Center in 2011. Here’s a clip of our curator Ellen Lupton speaking about the piece.)

If you are interested in learning more about radical queer oppositions to the institution of marriage, you may enjoy Against Equality, a collection of texts edited by Ryan Conrad.