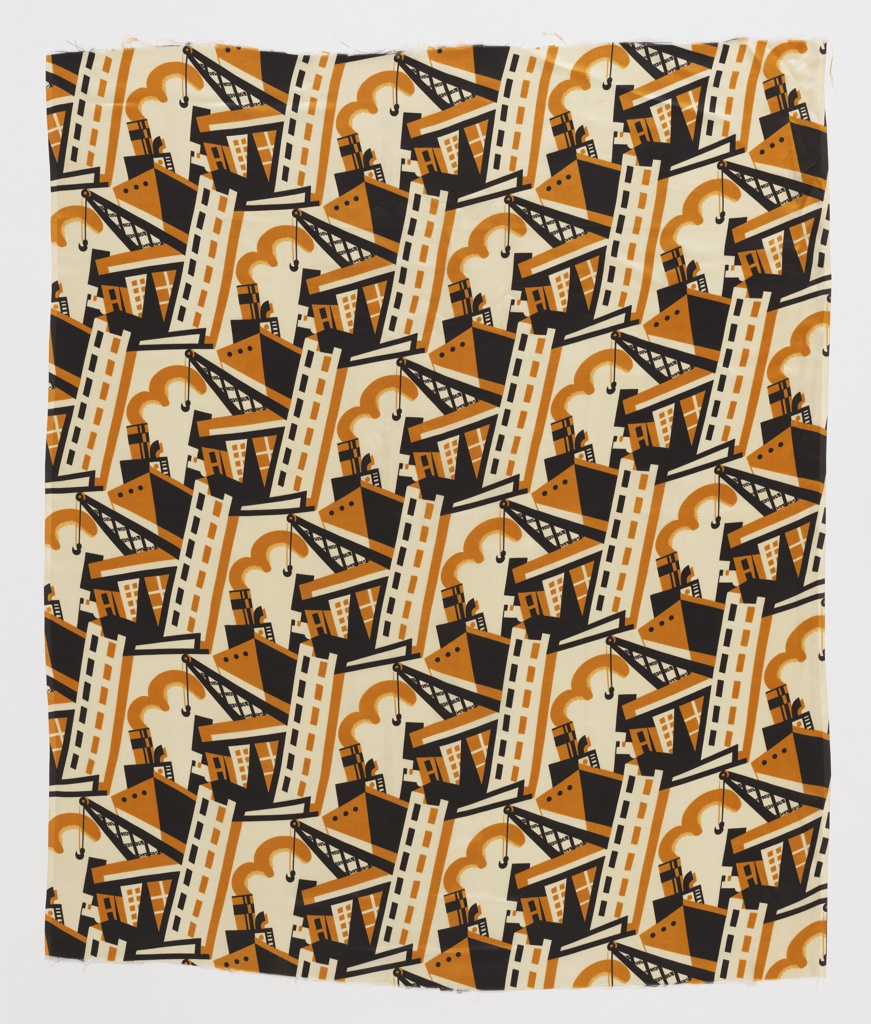 This Constructivist-inspired textile likely was produced in the United States during the mid-to-late 1920s. The designer is presently unknown, but presumably was an individual familiar with Russian Constructivist design principles, which took inspiration from the industrial world. Printed in dark yellow and black on creamy off-white silk satin, the textile has an overall design of opposing diagonals that depicts a commercial ship, a crane and hook, and geometric forms that suggest steel girders and urban warehouses. The shallow depth of field, rigid lines and high-contrast color scheme create a hard-edged and ambiguous space. Mechanical forms, densely arranged, show the confluence of Russian Constructivism with American Precisionism, an art movement that in the 1920s began to express the imposing geometry of industrial spaces with crisp lines and smooth surfaces. Precisionism celebrated the speed, efficiency and power of American manufacturing through the creation of cool, clean machine imagery devoid of human workers or their working conditions. The resulting world was an emotionless space of angular, geometrical and industrial forms.

This textile probably was produced in a small quantity for a specialized market and may have been used for any number of the New York department store design expositions that were created in response to the Paris Exposition of 1925. These department store design events, held at Lord & Taylor, Macy’s, Wanamaker’s, and Franklin Simon, proved to be immensely popular during the final years of the 1920s. The fabric may have served as a backdrop for a display of goods or possibly was used to create a fashion-forward ensemble or lounge wear for a stylish woman of the period.

Kimberly Randall is the Collections Manager of the Textiles Department.

← Draping the Walls
A Panther with Leopard Spots →