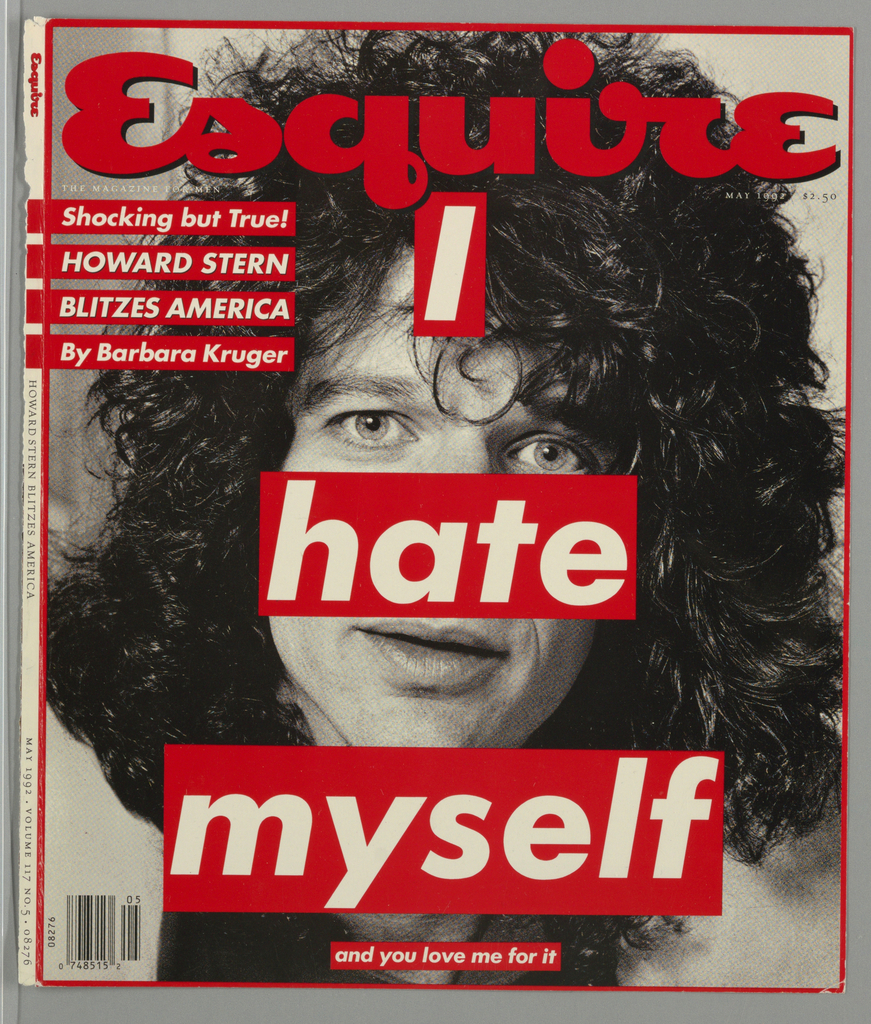 Known for her bold engagement with popular culture and mass communication, American conceptual artist Barbara Kruger provokes and entices the viewer with her cover design for the May 1992 issue of Esquire. Featuring a close-up, black and white photograph of the controversial shock-jock Howard Stern, the superimposed text obscures significant portions of his face, excluding his sad, earnest eyes and trademark dark curls. Three bright red blocks containing white slanted text in Futura Bold form the phrase, “I hate myself,” with a smaller block below adding, “and you love me for it.” The same photo with slightly altered text appears inside the issue of Esquire, accompanying an article on Stern by Kruger; “I love myself” appears across Stern’s face, with “and you hate me for it” below.[1] Interior design, I Love Myself and You Hate Me for It, Esquire, May 1992, Designed by Barbara Kruger (American, b. 1945)

Kruger captures Stern’s unique blend of narcissism and self-loathing through her designs and cover story. She writes, “Zigzagging between self-degradation and megalomania, political clarity and dangerous stereotyping, temper tantrums and ridiculously humble ingratiation, he is both painfully unsettling and crazily funny.”[2] She reminds us that human identity is multi-dimensional and even contradictory, while also complicating a singular idea of feminism. Recognizing Stern’s progressive positions on certain issues, she simultaneously acknowledges his explicit, sometimes offensive sexual commentary.

In Kruger’s cover design, the red blocks of slanted white text become visual elements that alter the photograph of Stern, convincing the viewer to question assumed authority and remain open to discontinuities. Kruger challenges the proliferation of stereotypes and assumptions in mass media by transforming the magazine cover into a space of conceptual complexity and critical engagement. Her cover and corresponding design inside the magazine assure one that disgust and empathy are both valid responses to the complicated Stern; it is acceptable to simultaneously loathe and like the unfiltered, entertaining ruler of raunch.

Stern remains a complex and compelling cultural icon, hosting a popular radio show on SiriusXM Satellite Radio. Although he has maintained his fascination with bodily functions and other indecorous topics, such as his cellulite-ridden buttocks, he has evolved through intensive therapy and his second marriage to the animal rights activist Beth Stern, with whom he has rescued hundreds of cats. The shock-jock has become more introspective and empathetic, developing a reputation for engrossing, illuminating celebrity interviews, a selection of which are compiled in his book Howard Stern Comes Again, released this month by Simon & Schuster. The June 2019 issue of Rolling Stone features Stern on the cover holding two black kittens, with a headline that reflects his metamorphosis: “A Softer Side of Howard Stern.” A Softer Side of Howard Stern, Rolling Stone, June 2019; Photographed by Alexei Hay

← A New Form for a New Technology
Draping the Walls →