Reflections on a Cosmic Cat 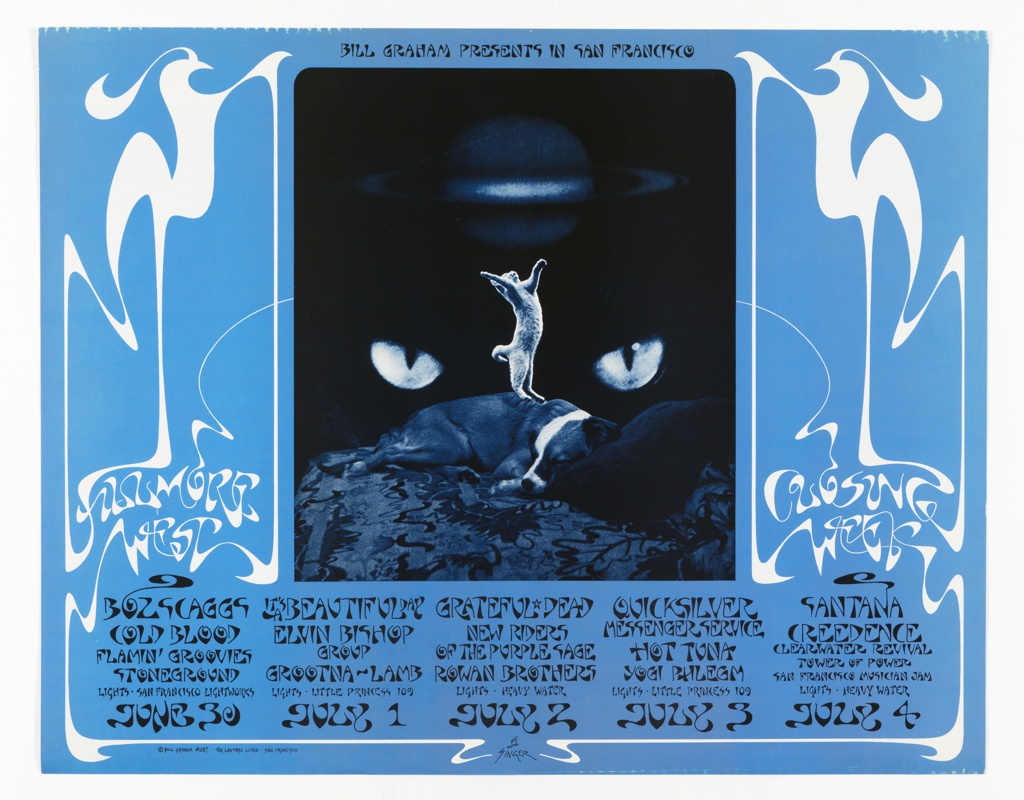 As the San Francisco rock scene grew in the 1960s, posters were commissioned by the concert promoter Bill Graham for shows at popular venues such as the Fillmore Auditorium. David Singer produced more posters for Graham than any other artist, designing 75 posters from 1969 to 1990.[1] Although he had an unusual background for a psychedelic poster artist—a childhood spent in rural Pennsylvania, a stint in the Navy, and marketing work for companies in the Financial District of San Francisco—he went on to take his place alongside giants of the genre such as Wes Wilson and Victor Moscoso.

Singer’s most formative influences came from his family, particularly his adoptive mother, Dorothy, who went to art school and hung her paintings around the house. Another important influence was his great aunt Flossy, who kept scrapbooks that left a strong impression on Singer, who remembers flipping through pages of pictures arranged thematically, including double-page spreads of cats and dogs. Singer soon became a “magazine freak,” frantically cutting pictures from magazines and creating collages that he later referred to as “visual poems.”[2] After showing a portfolio containing his best collage work to Graham in 1969, he was immediately commissioned for a series of concert posters.

Although this poster for the Fillmore West’s closing week in 1971 was actually printed after the week of shows ended, it is considered one of Singer’s masterpieces. A strange scene appears in cool blue and black in the center of the composition—a cat dancing on a sleeping dog below a grainy photograph of Saturn, with a haunting pair of feline eyes in the background. Hand-lettered, curvilinear text appears above and below the central collage, providing details about the week, including the names of 17 different bands. At left and right, swirling, bird-like shapes appear, mirroring the curving forms in the elaborate bedspread design underneath the dog and the white streak down the center of the slumbering canine’s face.

Although lacking the bright, intense colors and intertwining of text and image typically found in other psychedelic posters, Singer’s design is similarly liberated from the traditional restrictions of advertising and induces a reflective process. The viewer is encouraged to spend time deciphering the fluid, dynamic letters and comprehending the bizarre imagery. Although the poster evokes the hallucinatory experience that often accompanied psychedelic light shows and rock music, the experience becomes part of a larger philosophical questioning about the universe and the nature of reality. The cat—a familiar, domestic creature—takes on a spiritual, cosmic dimension, arousing slight laughter but also becoming an enduring and poetic symbol of the ineffable.

← Radio in the Round
Falling into Flowers →