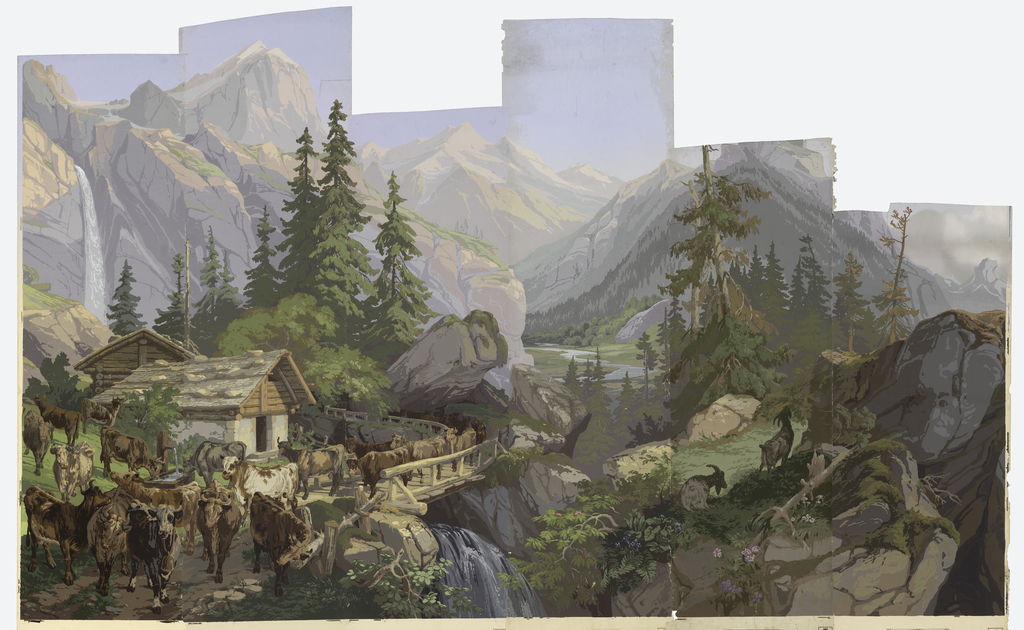 Wall-hangings throughout the centuries have come in a variety of forms and materials, tapping upon subject matter that is just as diverse. During the late 1700’s and early 1800’s scenic wallpapers came into production and swept through Europe, most notably in their place of origin, France. They are thought to have been created in a response to panoramic or rotunda painting of the time. A panorama painting was “a broad, continuous view of a landscape which originated as a type of painting in the late 18th century.”[1] Due to the popularity of the initial panoramic paintings, other artists also began to create works in this genre across artistic mediums; typically they showed bucolic landscapes, cityscapes, popular historical battles or “exotic” lands populated with native people. In this scenic paper, created by the company Zuber & Cie, we see one such bucolic landscape as an expansive alpine scene, complete with mountains, cattle, and a tumbling waterfall laid out before our eyes.

In addition to the popularity of panoramic paintings, French scenic wallpapers also gained popular influence through a couple of other cultural phenomena that occured during this time period. Along with the free flowing trade routes of the 19th and 20th centuries, there was a propensity for foreign travel among the upper echelons of society. Many wealthy Europeans, and some wealthy Americans took trips outside their countries to visit sites of classical antiquity, historical value, or unprecedented natural beauty; this journey is best known as the Grand Tour. Privileged individuals wanted to visit and explore faraway or “exotic” places they had heard about through their education or learned about through seeing or living with imported goods. Scenic wallpapers were made, in part, to act as expensive souvenirs for the rich who wanted a reminder of their travels abroad or for the individual who could not travel abroad but wanted to take in the sights.