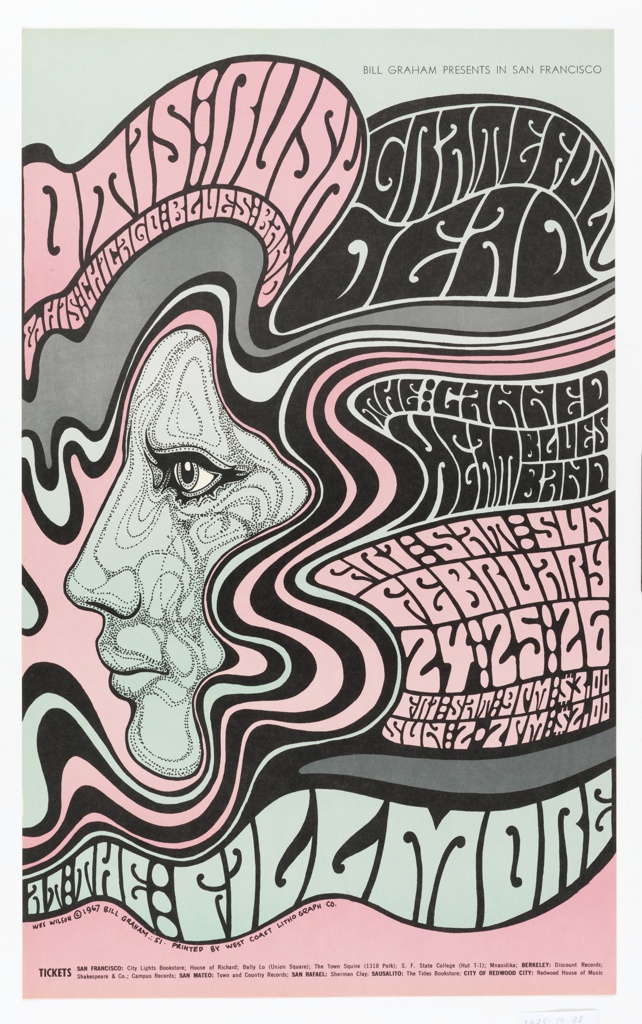 A pioneering example of psychedelic design, this work was one of the 56 posters that Wes Wilson produced between 1966 and 1968 for the Fillmore Auditorium in San Francisco. The posters were commissioned by the rock concert promoter Bill Graham, who gave Wilson free rein over his designs until disputes about money severed their connection. Created for a concert featuring Otis Rush & His Chicago Blues Band, Grateful Dead, and the Canned Heat Blues Band, the poster displays many characteristics associated with psychedelic design—a dense, crowded composition, sinuous lines, swirling shapes and letterforms, and sensual, bizarre imagery. Although the incorporation of pale pink and grey (rather than bright, intense shades) is somewhat unusual for the style, the economical use of color is typical of psychedelic poster design.

Wilson was influenced by the undulating forms and prominent female figures associated with Art Nouveau design; in a 1967 Time magazine article, he cited Alphonse Mucha and Gustav Klimt as influences.[1] In addition, Vienna Secession designers such as Alfred Roller, Arthurian folklore, and the Wild West were important inspirations.[2] The most direct source of the rock poster style of Wilson and his peers, however, was psychedelic experience; the colors, dense patterns, and fluid elements suggest the effects of hallucinatory drugs on the mind. Similarly, the posters sought to evoke the visual and psychological impact of 1960s liquid light shows and rock music through an emphasis on compressions and distortions. In Wilson’s dynamic composition, the forms appear to melt and swell, not only creating an illusion of depth but also transforming the poster into a living object.

Wilson is perhaps best known for his innovative experimentations with hand lettering, which is particularly evident in his work for the Fillmore. He radically expanded the possibilities of text, emphasizing its ability to move beyond linguistic and formal constraints. He plays with the shape of language, stretching and distending letters while also making words compact. Turning text into abstract forms, Wilson integrates word and image in this design, blurring the boundaries between his swirling letterforms and the thick, undulating strands of the woman’s hair that surround her face and move across the composition.

Although psychedelic posters deviate from the strict modernist style associated with objectivity, clarity, and clean, sans-serif type, the deciphering process demands the reader’s attention and requires a prolonged form of viewing. Opposed to the traditional strategies and assumptions of advertising, they sacrifice legibility for an engagement with the disorienting and shifting impressions of space and form. While questioning stable conceptions of reality and perception, the posters also imply an open-ended, perpetual state of becoming through the figures, patterns, and words that continually form and reform together. The central female in Wilson’s design here seems initially to resist her surroundings; with her calm, serious expression, she appears to be a protector of inner wisdom, focused on something the viewer is unable to grasp or comprehend. Yet the sinuous lines and swirling forms define the structure of her profile and encroach on her face, generating surface details that resemble a topographical map of some imaginary, undefined location.

← Careers in Color: Designtex
Who is Phyllis? →