Lions, and Tigers, No Bears, Oh My! 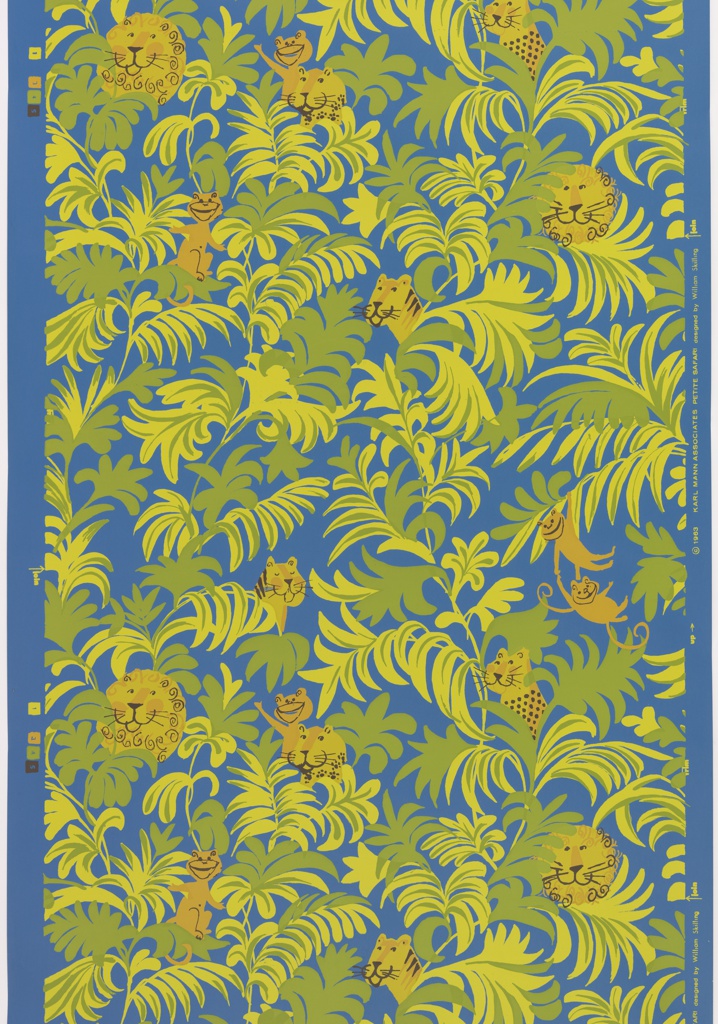 Posted by Gregory Herringshaw on October 7, 2018

This is a delightful wallpaper designed for children. The design is rendered in a very flat perspective and illustrated in a naïve manner, which seems reminiscent of illustrations found in children’s books. A fun and whimsical paper that would allow children to create their own little safaris. The jungle scene contains images of lions, tigers, leopards and monkeys, each peeking out from behind or swinging from the dense foliage. The animals all appear to be very happy in their jungle enclave as each is wearing a huge smile. The design is printed in a minimal color palette but the greens and golds of the foliage and animals really stands out against the medium blue ground.

William Skilling is an American artist known for his oil paintings of animals. Most of these are of the more exotic varieties, including camels, tigers, leopards, and zebras. While his oil paintings show a more realistic rendering of these animals, many of them are shown facing the viewer. Also, many of the painted animals are shown wearing collars and chains, and appear much less happy than the wallpaper animals in their jungle habitat.

Karl Mann was an established artist before entering the wallpaper field. He was painting in the abstract expressionist school, and also made collages and assemblages. His clients included Helena Rubenstein, and his work has been shown in museums around the country, including the Museum of Modern Art and the National Gallery. Fortunately, he was also a businessman and established Karl Mann Associates, using his creative eye to create some trendy and of the moment wallpapers.

One thought on “Lions, and Tigers, No Bears, Oh My!”

so much like a children’s book illustration. makes it very comfortable. also the friendly colors.