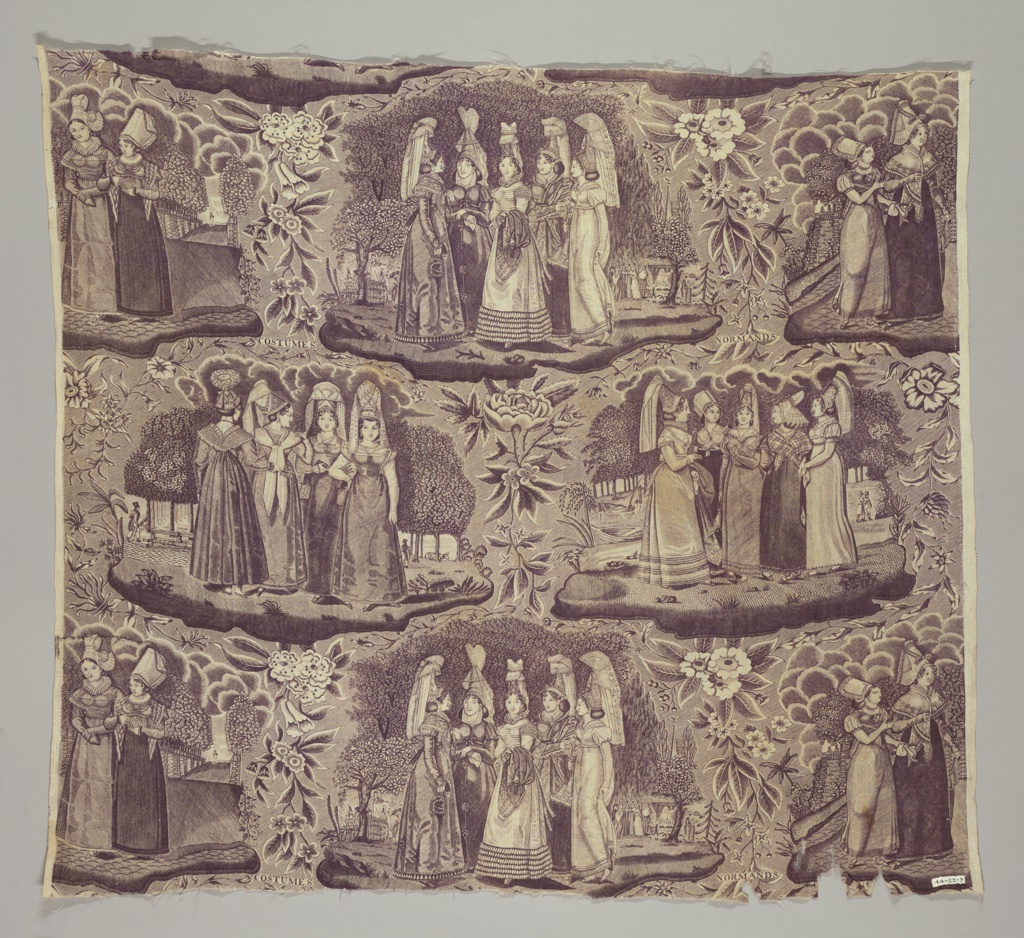 The mechanical innovation of printing on cotton with engraved copper rollers was perfected by the British in the early 1780s and brought to France in 1797 by Christopher Oberkampf, the founder of the renowned printed cotton manufactory in Jouy, outside Paris. Over the next decade, machines were installed in other centers of cotton production including Mulhouse and Nantes. Compared to plate printing that had been in use since the mid-eighteenth century, roller printing was considerably faster, allowing for a significantly larger output in the same amount of time. This, in turn, reduced the costs of and expanded the market for these fabrics that were sought after by middle- and working-class consumers, eager for the latest novelties.

In the second half of the eighteenth century, French manufacturers of printed cottons relied heavily on foreign imports, primarily from Britain and India. However, by the second decade of the nineteenth century, French spinners and weavers were making dress and furnishing cottons in a wider range of qualities and greater quantities than previously. By the mid-1820s, the abundance of domestically produced cottons also contributed to the dramatic increase in consumption and lower prices of this commodity.

Both to entice consumers and in response to their demand, manufacturers offered new designs on a frequent basis. As producers of plate-printed cottons had done in the eighteenth century, firms in the early nineteenth century often drew on engraved sources for inspiration. Historical, biblical, allegorical, mythological, and exotic subjects; scenes from novels, plays, and operas; and genre scenes were all highly popular for furnishing cottons during this period.

Many of the figures in this cotton from the Cooper Hewitt collection derive from an 1827 publication, Costumes des femmes du pays de Caux et de plusieurs autres parties de l’ancienne province de Normandie, that attests to the growing interest in regional traditional dress during the Romantic period. The 105 individual figures in the plates were drawn by the well-known painter and illustrator, Louis-Marie Lanté (1789-1871), and engraved by Georges-Jacques Gatine (ca. 1773-after 1841). Lanté frequently contributed illustrations to the renowned French fashion periodical Journal des Dames et des Modes (1797-1839), that were also engraved by Gatine. In fact, apart from their distinctive, towering headdresses, the young women’s high-waisted dresses with puffed upper sleeves, applied decoration on the bodice and at the hem, and frilled collars are very similar to contemporary fashion plates. Requiring hours of washing, starching, and ironing, the forms of these elaborate headpieces identified the wearer’s town or village in the Norman province. Among Lanté’s figures selected by the cotton’s designer and placed on small islands in groups of two, four, and five are: Cauchoise (Nos. 1 and 9); Costume de Coutances (No. 26); Costume de Rolleville, dessiné au Hâvre (No. 36); Costume de Rolleville (No. 37); Costume de Lisieux (No. 40); Costume de Caën (No. 43); Jeune fille de Bayeux (Nos. 49 and 52); and Costume de Saint-Valery en Caux (No. 57). The monochromatic palette (here, sepia colored) is characteristic of roller-printed cottons as is the short repeat, disguised by a dense filling pattern of stylized flowers and foliage.

Michele Majer is Assistant Professor at Bard Graduate Center in New York, where she teaches courses in eighteenth-, nineteenth-, and twentieth-century fashion and textiles. In 2012, she curated a BGC Focus Gallery exhibition, Staging Fashion, 1880-1920: Jane Hading, Lily Elsie, Billie Burke, and contributed to and edited the accompanying catalogue. She is also Research Associate at Cora Ginsburg LLC and is a regular contributor to the annual catalogues.