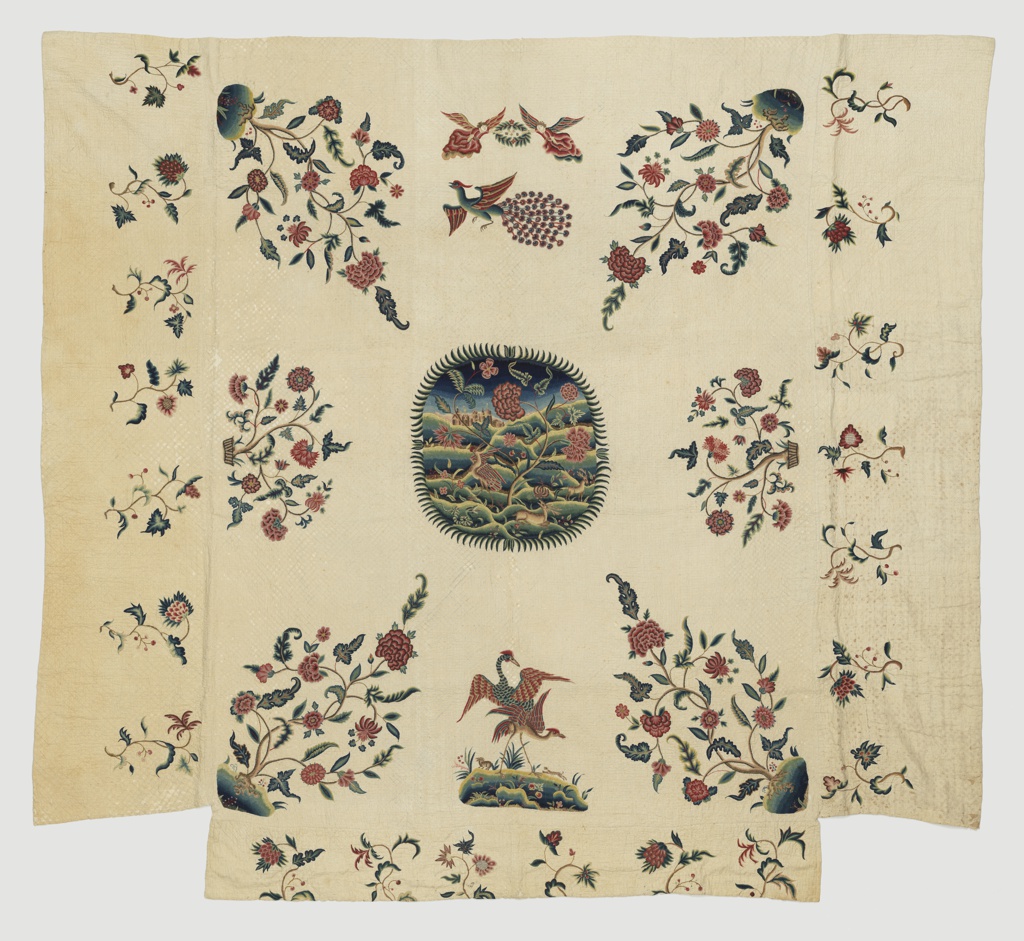 Cora Ginsburg, who donated this bedcover to the Cooper Hewitt in 1993, knew a bit about eighteenth-century English embroidery. Over her years as an antique dealer in New York specializing in textiles and clothing, Cora held in her hands many pieces of linen and cotton that previously had passed through the hands of the (mostly) anonymous women who took plain-woven cloth and, with their needles, created decorative fantasies. Who wouldn’t want to sleep, and dream, beneath this one?

A peacock flies with angels. Two cranes stand on a sliver of ground. The bedcover’s central medallion, with its border of flame-like leaves, encapsulates both pleasures and dangers. A branching stalk, sinuously growing carnations and pansies, is superimposed on a landscape where a hillock with a hissing snake and placid deer stretches to a faraway castle, and a sky above fades from early morning to midnight blue.
All is impossible yet fully captures the realm of English embroidery where motifs copied from pattern books, bestiaries, and botanical engravings—such as those I poured over with Cora from her collection, including the 1688 A Treatise on Japanning and Varnishin, by John Stalker and George Parker and those by Margaretha Helm from the early eighteenth century that feature motifs similar to those on this bedcover—gave embroiderers license to play with realities of scale, of East and West, of animals actual and mythological.

Cora donated this bedcover in memory of textile scholar Jean Mailey, who worked at the Metropolitan Museum of Art’s Textile Study Room from 1959 to 1985. I write this in memory of Cora, whose observant eye and knowing passion for textiles enrich many museum collections today.

Donna Ghelerter is a textile and fashion historian in New York. In 2017, she published Marguerita Mergentime: American Textiles, Modern Ideas, which highlights Mergentime’s life and career as a textile designer in the 1930s.