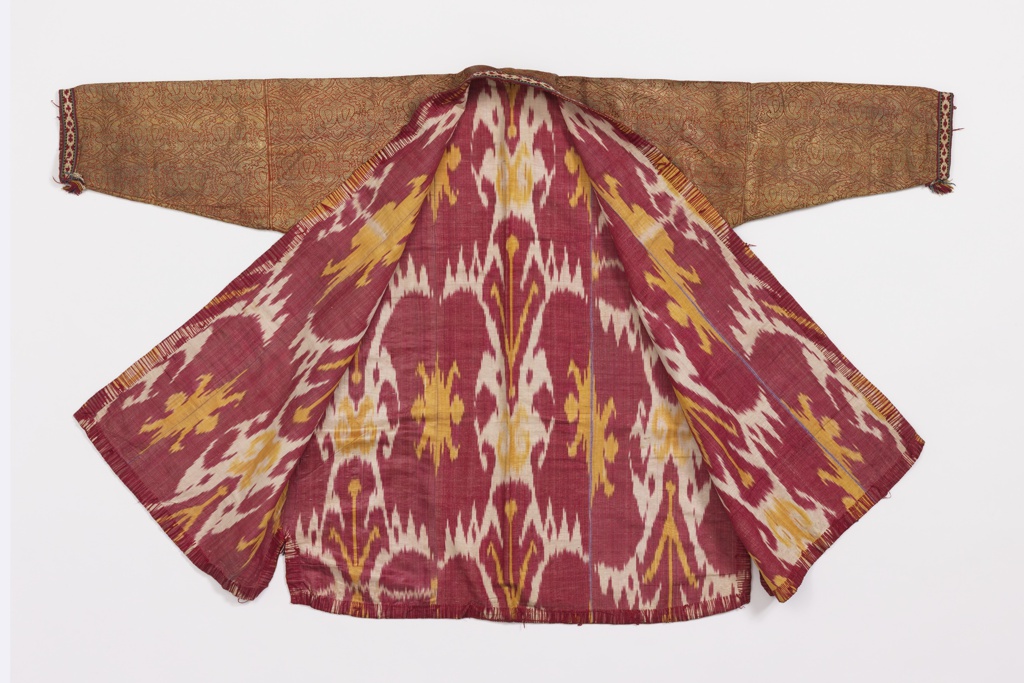 This robe was once adorned a high official of the court of Bukhara, an ancient city nestled in one of Central Asia’s fertile oases. Surrounded by lush orchards and fields, the city was the center of power for the Manghit dynasty’s Bukharan Khanate from 1785 until the 1920 takeover by the Soviet Union.

Centuries of political turmoil and instability in Central Asia preceding the nineteenth century created an environment that compelled people to accumulate and invest their wealth in portable items such as textiles and jewelry. Textiles were light, made with expensive materials, required costly labor to produce, and did not lose their value.

Central Asian costume in the nineteenth century consisting of layered garments made out of luxurious materials and a variety of headgear, jewelry, ornaments, and accessories, was a feast to the eyes of many travelers to the region. Each garment had myriad bright colors, was cut full, and hung loose with flowing lines. Although our contemporary eyes may consider the resulting silhouette bulky, Central Asian people wore many layers of clothing not only to protect themselves from the elements, but also to show off their wealth, and thus their importance in society. This was the accepted aesthetic of the times.

It could be argued that wearing one’s wealth was the vestige of a nomadic past still lingering among the long settled former nomadic societies. Because textiles meant wealth, they were treated with respect. They were kept in the family, recycled for generations, and when they were constructed, fabrics were minimally cut so there was no waste. This practice follows a pattern well known among many textile-producing cultures, where so much effort goes into making the cloth itself that none is wasted, so people in these societies choose to wear garments that are loosely tailored without any angling and sculpting.

The large size of the robe called chapan and straight cut under the arms indicate that it was made for a man. It is also particularly sumptuous, indicating that wearer had wealth to lavish on a garment such as this. The outer layer of the garment was composed of silk fabric embellished with metallic-wrapped silk supplementary weft yarns creating a sumptuous ogival lattice. Photographs taken in Bukhara and Samarkand in the nineteenth-century, show emirs as well as many high officials such as judges wearing this type of robe.

The lining of the robe is also luxurious ikat fabric. Ikat derives its name from the technique used to decorate fabric, wherein parts of the warp or weft yarns are tightly bound in order to resist dye penetration. The bold and colorful designs of ikat fabrics are created before the yarns are woven into cloth. The colors and design of the ikat used inside of this robe indicate that the fabrics were tailored into a robe in the second half of the nineteenth century and trimmed with silk band all along the edges of the robe.