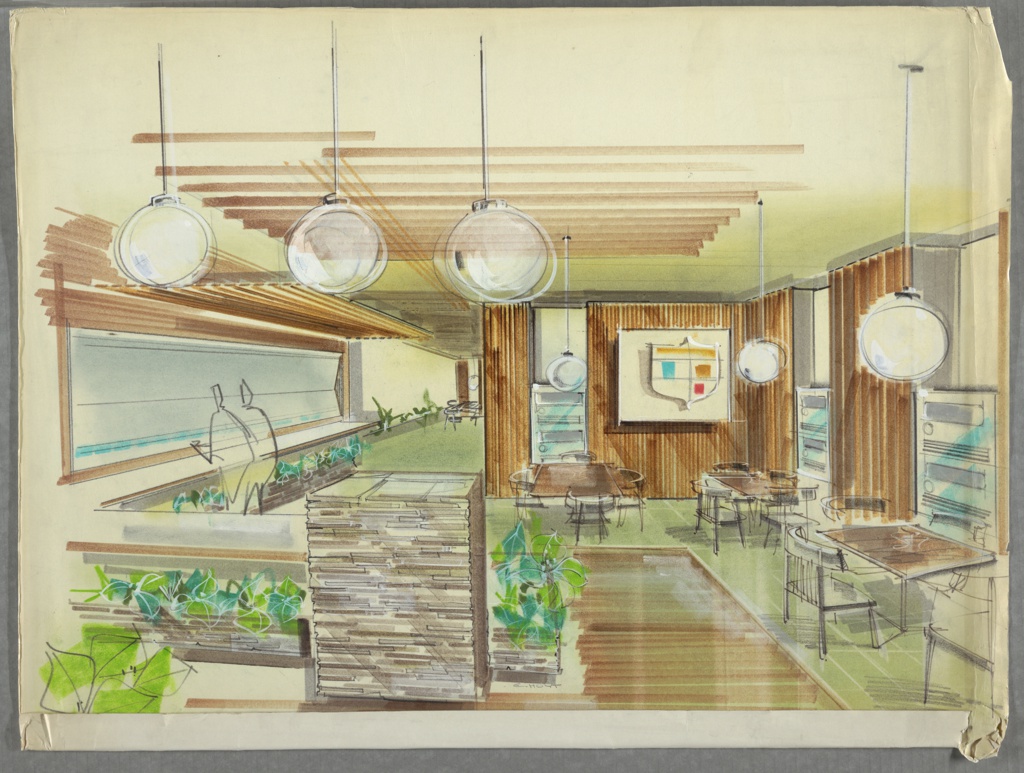 In a 1947 article on frozen food for Popular Mechanics, Andrew Hamilton anticipated that “before long you may see frozen dinners served in hotels, trains, planes, ships, factories, offices and your own home.”[1] Earl E. Hoyt Jr., designer and draftsman at Donald Deskey Associates (DDA) between 1960 and 1965, sought to realize Hamilton’s prophecy in this speculative design for a corporate cafeteria that served frozen foods.

The prolific designer and principal of DDA, Donald Deskey (whose archive Cooper Hewitt holds), hired Hoyt straight out of Pratt Institute, where he studied industrial design. His senior project dealt with the production and distribution of frozen food—a still-nascent industry when the designer graduated in 1960—and incorporated solutions for harvesting crops, preparing and storing flash-frozen goods, and delivering them to supermarkets. Deskey’s business acumen matched his design dexterity, and recognizing the potential for such a system he placed Hoyt in his Special Projects department. According to a 1991 interview with Hoyt conducted by former Cooper Hewitt curator Gail Davidson, the Special Projects section was “a vehicle that Mr. Deskey used to explore things of personal interest to him.”[2]

It is easy to understand why a project for a corporate frozen-food cafeteria was of interest to Deskey and Hoyt. The concept combined two contemporary fast-food solutions: the frozen dinner and the automat. The former’s roots can be traced to the Canadian engineer Clarence Birdseye,[3] who learned from Inuit fisherman that food must be frozen almost instantly in order to maintain its texture and flavor when thawed. In 1927 he filed a patent for a “multi-plate freezing machine” that flash-froze foods between two metallic plates in a convection tunnel. Later, in 1944, the W.L. Maxson Company created the first frozen meals, marketed as Strato-Plates and sold to the US Navy and commercial airlines.[4] These technologies ultimately led to the creation of the iconic frozen TV dinner.[5]

The automat was an icon of urban dining at mid-century. These supposedly equalitarian eateries[6] combined fast food, vending machines, and cafeteria-style seating. They provided quick and affordable fare, fresh from modular metal-and-glass, coin-operated machines, to urbanites across America and became a special staple of New Yorkers’ palates.

It must have been with these precedents in mind that Hoyt and Deskey developed the above design. At left is a counter where diners could select frozen menu items that they would heat themselves in one of the double-stacked microwave ovens set into wall recesses near each table. The interior’s open-concept plan, large plate glass windows, stacked stone masonry, and interior greenery would have been in keeping with contemporary corporate design trends. It would likely have also incorporated materials such as linoleum, manufactured plywood paneling (like Deskey’s Weldtex), and Formica. As corporations increasingly relocated to suburbs in the postwar period, a frozen food dining hall would have been appealed to executives desirous of feeding their white-collar fleets without great sacrifice of time or expense. Although Hoyt and Deskey never realized their concept, the renewed popularity[7] of pre-packaged and frozen meals today is a testament to the prescience of this and other ideas from DDA’s Special Projects section.

[3] Birdseye is, of course, the eponym of the present-day frozen food industry giant Birds Eye.

[4] Maxson also developed for airplanes a lightweight convection oven—the Maxson Whirlwind Oven—that could cook six meals at once in half the time of a regular oven.

[5] Credit for the TV dinner is anecdotally given to C.A. Swanson & Sons executive Gerry Thomas, however there is dispute over the idea’s origins, and there were already precedents for frozen meal trays prior to 1952, when Thomas developed his concept.

[6] In observance of the Depression-era automat’s tendency to attract diners of all income levels and ideologies, the February 23, 1933 issue of The New York Evening Sun quipped “Said the Technocrat, to the Plutocrat / To the Autocrat, and the Democrat—Let’s all go to the Automat.’”

Rachel Hunnicutt is a graduate student in the History of Design and Curatorial Studies program at Parsons School of Design | Cooper Hewitt, Smithsonian Design Museum and Cataloguer in the Drawings, Prints & Graphic Design Department.