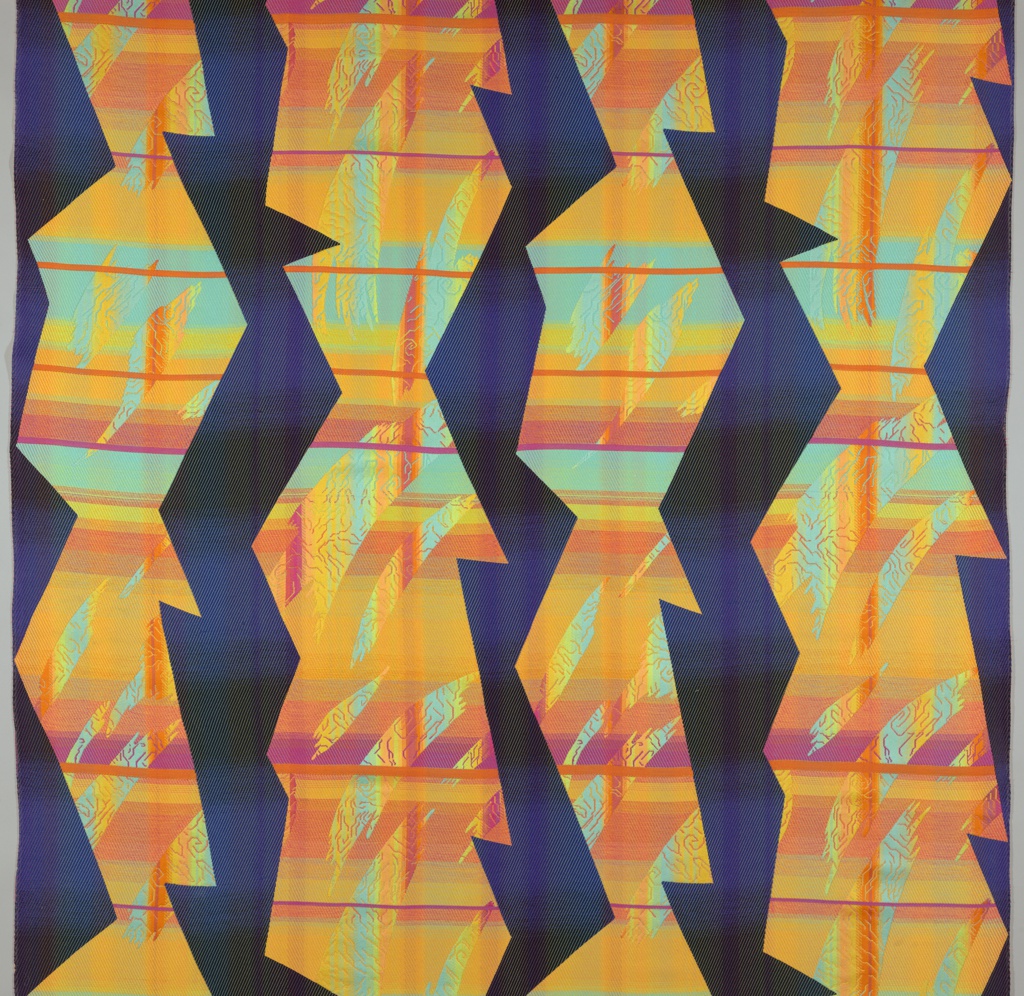 This stunning textile represents a successful integration of the handweaver’s sensibility with the power and versatility of electronic jacquard technology. It was created by Patricia Kinsella in 1991 when she was a member of the Muller Zell Jacquard Project, an opportunity for invited weavers to explore and develop work in an industrial setting with the support of the Muller Zell textile company in Germany.

The weaving presents a dramatic composition activated by columnar shapes with jagged contours, that establish an interesting interplay of figure and ground. The relatively flat dark shadowy forms, containing subtle shifts of dark blue hue in a weft dominant twill, contrast with the bright warmth of the summery sunset colors of the patterned ground. Some of the horizontal stripes, anchor the composition with a tactile and visual solidity echoing architectural divisions/appointments like window panes, while other stripes blend softly with one another in an atmospheric glow. By contrast, the vertical stripes of the warp appear fragmented as they define the surface of the randomly placed diagonally oriented organic figures that resemble gestural brush strokes. The squiggly raised lines that appear in these directional shapes of warp dominant satin, are determined by a dominant weft weave structure that adds an interesting textural detail and quality of connection with the ground plane. The warp stripes appear in faint echoes throughout the entire field in a beautiful example of optical color blending.

While the color is clearly the main player in the composition, the selection of weave structures beautifully emphasizes the physicality of the plane. The relief surface provides a haptic enticement to the graphic appeal of the design. Satins produce a slightly raised reflective surface, while the twills enliven the ground and the columns with directional movement, exhibiting the regularly spaced diagonal repetition that is a foil to the various angles, and curvilinear edges which define the shapes. The horizontal and vertical stripes, visually weave in and out of space and provide a macrocosmic reiteration of the microcosmic grid of the warp and weft axes.

Kinsella had previously been immersed in the creation of unique complex hand weavings that contained a similar vocabulary of marks, patterns, colors and textures. They were rich in spatial and associative intrigue, referencing maps and fractals while emphasizing the axes of weaving through selective gradations of color in both the warp and weft. The color play juxtaposed smooth and abrupt relationships throughout the field causing the ground shapes or patterns to recede and advance in unexpected passages throughout the composition.

When invited to participate in the Muller Zell project that allowed her to create this weaving in the Cooper Hewitt collection, she had to switch gears and recalled the challenge of the experience to me in our recent email conversation. Because her hand woven pieces were all singular conceptual objects, she wanted this jacquard textile to retain some of that unique character by avoiding a strongly defined repeat. She was able to create a design with a very large repeat that it is difficult to discern at first glance. Primarily she was interested in maintaining the “palpable physicality of color” that characterized her handwoven work. To this end, she did some sampling on her hand loom with yarns of her own choosing to explore color, texture and structural/weave options. She then had Muller Zell wind a special warp for her weavings that contained multiple warp stripes arranged to her specifications. In the weft, she used the maximum rotation of colors capable of being handled by the electronic loom – even having yarns plied specially for her to obtain the blending of color that was essential to her design. Kinsella was pleased with the results and I too find them beautiful and effective!

Janice Lessman-Moss is a weaver and professor of textiles in the School of Art at Kent State University.