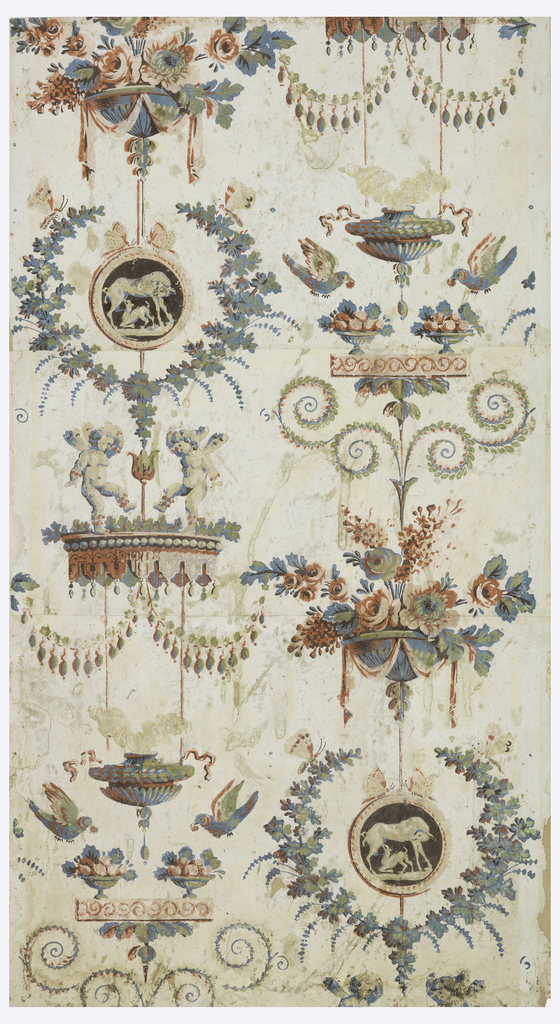 Posted by Gregory Herringshaw on August 22, 2018

The period from 1780-1820 produced some beautiful neoclassical wallpapers, of which the arabesque designs are a prime example. These wallpapers were inspired by the excavations of the ruins of Pompeii and Herculaneum which began in 1758. This wallpaper, which has seen better days, is an excellent example. On an arabesque design all of the elements or motifs are aligned along a central axis. This design is a two column format, with the same elements printed on the left side as on the right, just staggered to improve the visual flow across the wall. As light and airy as these designs appear there is really a lot going on.

Each different scene is delicately suspended from the one above, and while the motifs are not always symmetric, they are always perfectly balanced. The columns start with the two birds, each grabbing a berry out of a fruit-filled compote. The compotes sit at opposite ends of a plinth, which rests atop a foliate sprig which sits in a trumpet-like vase which also contains four foliate scrolls. The vase leads into a bouquet of flowers set into a drapery-wrapped bowl. A ribbon affixed to the bottom center of the bowl supports a cameo of a horse and foal which is housed in a beaded frame atop which two butterflies sit. The cameo is enframed in a foliate wreath on which another two butterflies alight. The wreath connects to an altar of sorts around which two putti dance on a landscape plateau, the underside of which is ornamented with strung beads and a lambrequin. Directly beneath this hang two swags supported by the bouquet on either side. And finally, two ribbons drop down from the plateau to support an oil lamp or incense burner, which leads us back to the strawberry thieves. Each element is in perfect sync with all the others, and I think if you removed a single butterfly, or bird, or putto, it would throw off the symmetry of the whole design. As much as the arabesque designs seem to defy gravity, they just work!

Greg Herringshaw is the Assistant Curator of the Wallcoverings Department

One thought on “Delicately Defying Gravity”

THANK YOU so very much for generously sharing samples from your wallpaper collection – and the erudite information accompanying each. It is always a delightful pleasure to discover every offering!