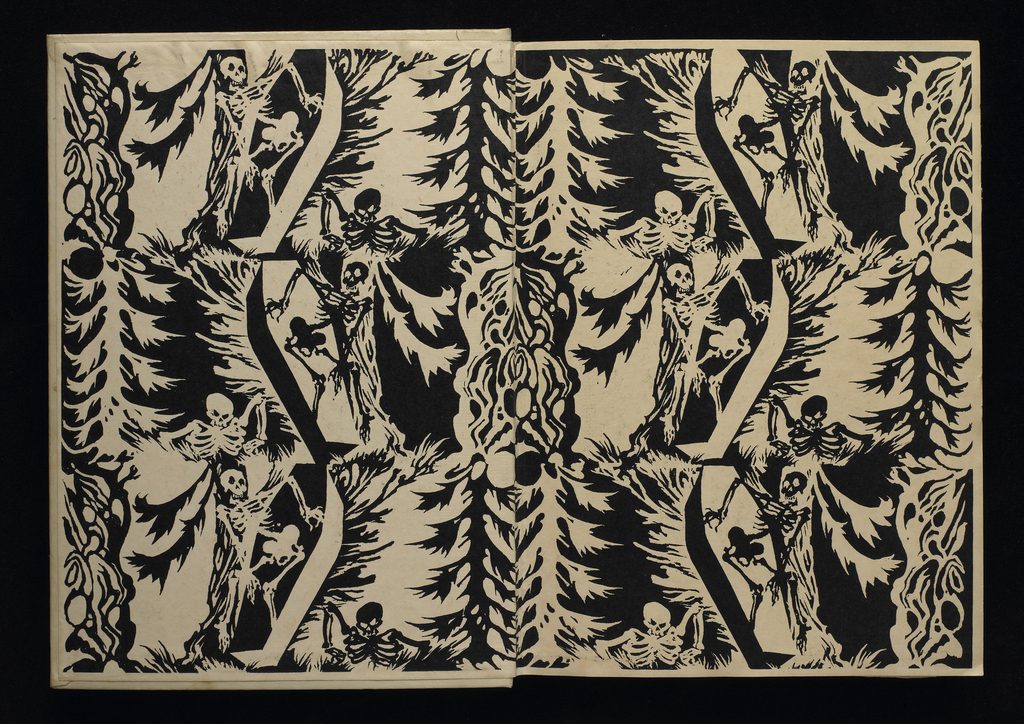 Arthur Rackham created this captivating endpapers design for Edgar Allan Poe’s Tales of Mystery and Imagination, published in London by George G. Harrap & Co. in 1935. The book brings Poe’s tales of horror and suspense—including such favorites as “The Tell-Tale Heart,” “The Cask of Amontillado,” and “The Pit and the Pendulum”—together with the expressive illustrations of Rackham. In addition to designing the endpapers, Rackham produced designs for the cover, spine, and title page, as well as full-page color plates, partial-page illustrations, and a variety of vignettes. Rackham took a comprehensive, integrated approach to his work, considering all aspects of the publication­ carefully in order to create a cohesive object of design and give substance to Poe’s verbal imagery.

When Rackham had been given the task of illustrating Dickens’s A Christmas Carol  (1915) twenty years earlier, he did not adequately explore the ghostly, supernatural aspects of the story in his designs. It has been suggested that he may have softened his interpretation of the text in response to the tragedy of wartime and the prevailing sense of anxiety in England.[1] Here, in contrast, Rackham has delved into the terrifying content of the Poe tales and fully embraced the opportunities presented by the text. Rackham’s designs exquisitely capture the mystery, madness, and horror associated with Poe, leading the artist to declare that the illustrations “were so horrible I was beginning to frighten myself.”[2] Although he successfully rose to the task, Marita Ross, who modeled for the artist, reported that he actually did not enjoy the commission, due to his fear that he would be unable to make the illustrations sufficiently gruesome.[3]

Rackham’s mastery of the silhouette, as shown in his previous illustrations for Cinderella (1919) and The Sleeping Beauty (1920), is reflected in this design for endpapers. Drawing from the unique approach to the silhouette that he had developed through his experimentations with texture and negative space, Rackham conjures a design in which dark and light shapes and structures continuously play against each other. Two-dimensional forms become three-dimensional as they take on the appearance of cut-outs springing from the page. Skeletons and partial skeletons combine with coffins, menacing fir trees, and biomorphic forms, overlapping and even appearing to merge into one another.

Designs such as this show Rackham to be a versatile, complex artist, not simply an illustrator of fairyland. In his interpretation of Poe’s stories, Rackham combines the decorative with the psychological, producing a world where the familiar can suddenly become nightmarish and grotesque. A tension and energy lurks beneath the carefully composed design, revealing the artist to be a true master of the macabre. In addition to fulfilling their role as graphic interpretations of the text, Rackham’s illustrations for Poe’s story are separate worlds of engagement and discovery. They also reflect his understanding of the essential differences between a work of art on a wall, associated with sustained contemplation, and one between the covers of a book, often looked at for a brief period of time before the page is turned to reveal a different subject. Rackham acknowledges the possibilities of illustration, writing, “In this branch, bizarre and unusual effects of arrangement, violent actions, exaggerations, and other matters of spasmodic interest may find a place almost forbidden on the walls of a room.”[4]

Carey Gibbons is a Cataloguer in the Drawings, Prints & Graphic Design Department at Cooper Hewitt, Smithsonian Design Museum. She also curated the exhibition, “Enchanted Vision: The Arthur Rackham Collection,” on view from June 18–August 31, 2018 at the Rare Book & Manuscript Library at Columbia University.

[4] Arthur Rackham’s comments on January 31, 1910 at a dinner given by the Author’s Club, where he was invited as a speaker and Guest of Honor. Quotation taken from a report in The Morning Post on February 1, 1910.

One thought on “A Horrific Design”