A Harmony of Contrasts 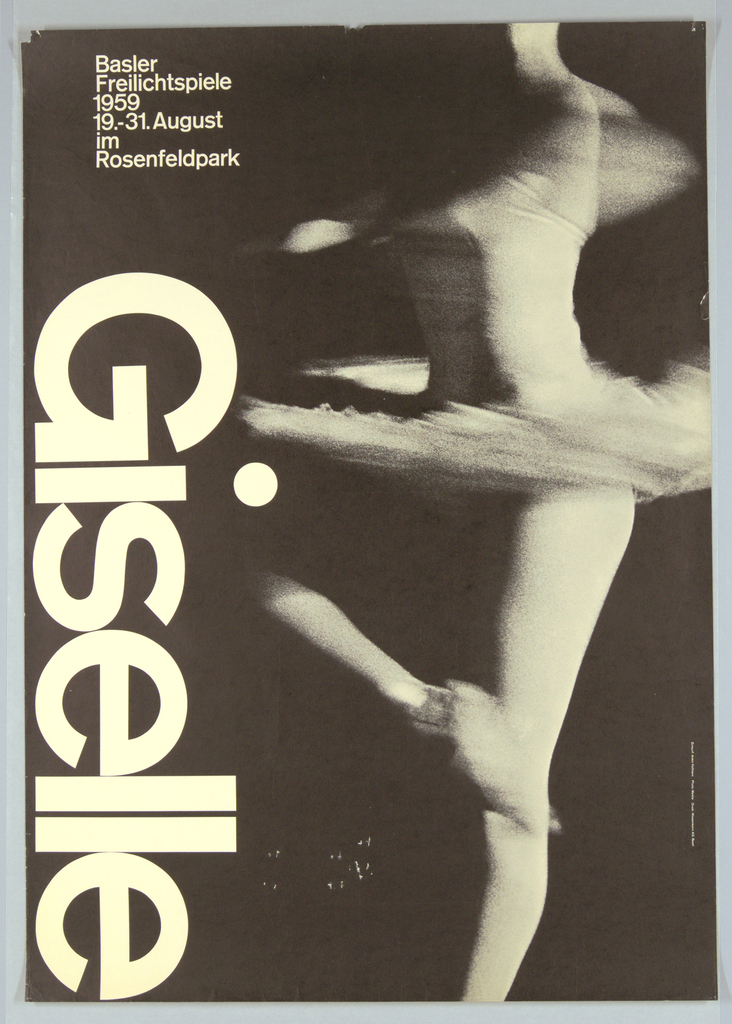 Armin Hofmann (Swiss, b. 1920) is associated with a graphic design movement known as the Swiss Style, which originated in Switzerland in the 1940s and 50s. Also referred to as the International Typographic Style, the Swiss Style is characterized by a recognition of the importance of typography—especially sans-serif fonts—as an essential element of design. The use of asymmetrical layouts, a grid-based design, and photography in place of drawings or illustrations are also features of the movement. Following his education in Zurich and an apprenticeship in lithography, Hofmann opened his own studio and began teaching graphic design at the Basel School of Arts and Crafts.

Hofmann has spent much of his career designing posters, including important projects for cultural institutions such as the Kunsthalle Basel and the Stadt Theater Basel. This poster, which advertises the outdoor performance of the ballet Giselle in Basel’s Rosenfeld Park, reflects his ability to convey a sense of dynamic harmony—the design becomes a unified whole, but the relationship between contrasting elements activates the composition. The photographic image of the organic, soft body of the ballet dancer in motion contrasts with the stationary, sharply geometric typographic forms. Additionally, the absence of color balances restraint against the dramatic contrast between black and white.

The viewer becomes captivated by the expressive energy of the ethereal dancer in mid-pirouette. Hofmann’s poster resonates with the haunting narrative of the ballet, reflecting the designer’s regular practice of making the content the starting point for his graphic solutions. The dancer recalls the Wilis, sylph-like spirits of virgin brides who lure men during the night and force them to dance to their deaths. After Giselle dies from a broken heart, the supernatural women summon her from the grave and compel her lover to dance, before the strength of her love is able to save him from death.

Hofmann remained at the Basel School of Arts and Crafts for 40 years until moving to the United States to teach at the Philadelphia College of Art, and later, at Yale University. His 1965 book, Graphic Design Manual, remains an invaluable resource, and his modernist philosophy of design based on the elemental language of point, line, and plane has influenced generations of designers. While conveying the power of simplicity and achieving a sense of harmonious resolution, Hofmann’s designs possess a unique complexity and vitality always informed by context.

← A Permutation Unfolding
A Plane, No Trains, and an Automobile →